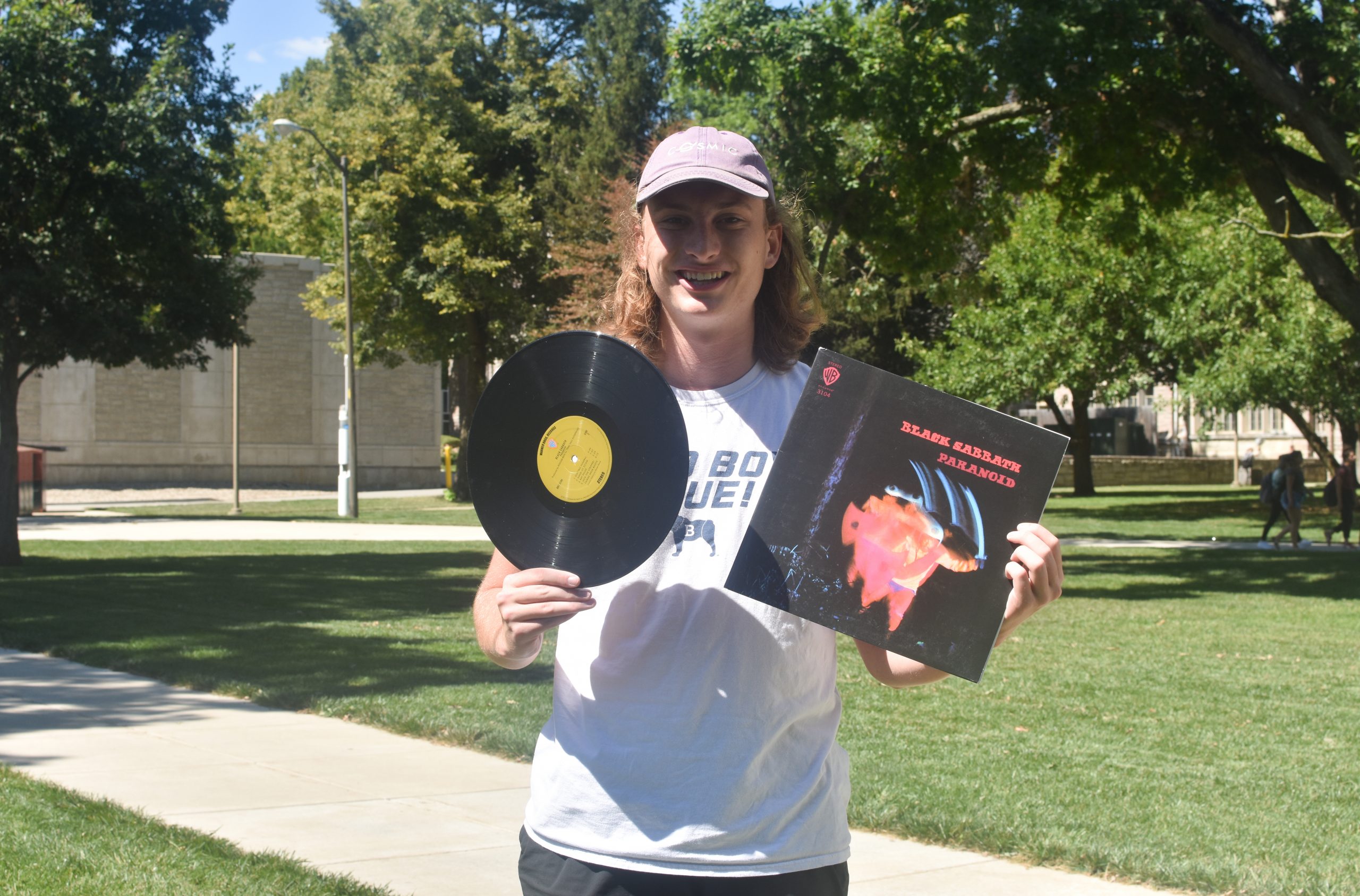 Junior Jack Holmstrom shows off part of his record collection. Over recent years, the popularity of vinyls has come back around. Photo by Lauren Jindrich.

The introduction of other technologies by 1990 had seemed to make the once popular vinyl record obsolete. However, a recent revival in vinyl album sales calls this assumption into question. Statista reported that vinyl album sales in the United States have grown for the fifteenth year in a row, while other physical album sales, such as CDs, are declining. Last year, vinyl records also accounted for 62% of all physical music product sales.

With so many different and more convenient ways to listen to music, one question remains: why have vinyl sales increased in the past years?

The comeback of vinyls has coincided with the popularity of “vintage” inspired trends in fashion and design. The rise of vinyls could be seen as a product of these vintage trends; however, vinyl collectors and listeners point to other reasons for the popularity of vinyl records. Bennett Lang, sophomore music performance major, expressed why he chooses to collect vinyl records.

“I like the idea of being able to collect a physical copy of the music,” Lang said. “You can actually say you own it, versus online where it’s not really yours.”

This is a common line of reasoning among vinyl collectors and listeners. According to Rare Records, when people buy the physical vinyl, they are more likely to regard it as something of value. It becomes a cherished possession.

If this is true of all physical copies of music, one might wonder why vinyl sales are increasing and CD sales are decreasing. Nick Durst, sophomore political science major and Spanish minor, attributed the difference to sound quality.

“Everything sounds better on vinyl,” Durst said. “It really teaches you to appreciate all the little nuances in every track that you hear.”

To create a vinyl record, the music is often recorded in real time as a cutter etches the sound onto a lacquer disc, as stated by Train Records. This means that the sound is more similar to a live performance than a CD or digital recording could be. As a result of how records are made and played, there can also be cracks or pops in the sound. For many listeners, this is an important part of the vinyl experience. The imperfections help create its charm.

Not only is the sound of vinyl records unique, but they also allow individuals to curate their own unique library of music. According to the Association of Psychological Science, the drive to be individualistic and unique is increasing. This makes activities that spark individuality, like collecting vinyls, more enticing. Jack Holmstrom, junior management information systems major, discussed the individualistic side of vinyl collecting.

“It’s a cool way to go deeper with an interest,” Holmstrom said. “Anyone can listen to music, but I think taking that time to go out, talk to people about it [and] search through record shops, is just a really cool experience.”

“If you look for [music on vinyl] that you might not be able to find on streaming, or [that is] lower quality on streaming, then you’ll find [music] you’ve never heard before,” Harton said.

Purchasing vinyls can also be very beneficial for independent or less popular music artists. Digital Music News reported that the popularity of vinyl has helped raise the overall revenue that artists can make on tour. Harton also talked about the importance of vinyls for small and local music artists.

Whether it is because of collecting, style or sound quality, vinyl records are clearly having a revival. The sales have been up for so many years that it seems unlikely that their popularity will be waning any time soon. While vinyl may not be mainstream, it is likely that there will continue to be a base of people who participate in this 73 year-old musical tradition.

Here’s a list of popular local vinyl record stores to check out: