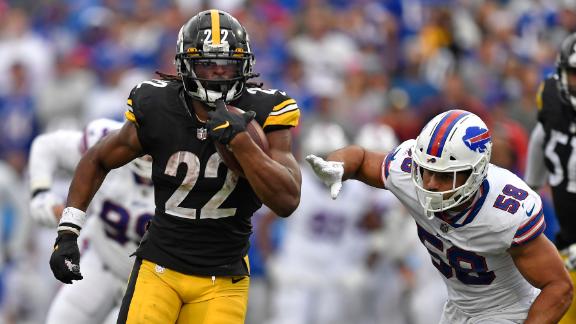 Talk about a welcome to the 2021-2022 NFL season. Last week was filled with everything a fan could ask for, from huge surprises like Jameis Winston becoming an MVP caliber player to a nail-biting overtime game between the Baltimore Ravens and the Las Vegas Raiders.

With one week now under fantasy managers’ belt, there should be a better understanding of what each teams’ lineup looks like. However, this also reveals which opponents will be a tougher matchup for your roster — making who you can trust in your starting lineups all the more difficult.

Here is a glimpse into the key players to start and sit for Week 2 of the NFL season.

Tyrod Taylor, Houston Texans. One season ago, Taylor was in a situation where he looked to be a solid starter for the Los Angeles Chargers after taking home a Week 1 win against the Cincinnati Bengals. However, a sudden freak accident with a team doctor led to him being placed on injured reserve and eventually replaced by then rookie Justin Herbert. All seemed lost for Taylor as he was in search of a team who still believed in him — and that team was the Texans. Following the scandals around Deshaun Watson, Taylor was forced to step up for Week 1 of this season. He did exactly that by dropping 37 points on the Jacksonville Jaguars. This week the Texans will face a tougher matchup in the Browns, but Taylor will still stand out as a spectacular waiver wire pick up for fantasy managers in search of a solid backup quarterback.

Zach Wilson, New York Jets. The second overall pick out of BYU from the 2021 draft is ready to show what he is made of. Wilson joins a Jets offense that has been in search of an identity since Mark Sanchez was still running into his offensive lines behind at MetLife stadium. In his first career game, Wilson struggled to put points on the board in the first half. Although, in the second half, he came out firing — eventually throwing for 259 yards and two touchdowns. This week, the Jets will get a date with Bill Belichick and the New England Patriots, who are known for giving rookie quarterbacks nightmares. Wilson has the potential to breakout, but with a rough matchup this week, Wilson should remain on the waivers.

Najee Harris, Pittsburgh Steelers. Following the theme of rookies, Harris — the first running back chosen in the 2021 draft — began his NFL campaign as well. Compared to Wilson though, Harris struggled the entire time to get it going, averaging less than three yards a carry. To Harris’s defense, he was up against a strong Buffalo Bills defense, so this upcoming game against the Las Vegas Raiders — that allowed over 175 rushing yards last week — should be a lot different. With Harris receiving the bulk of the carries already, this week’s matchup is a match made in heaven.

David Montgomery, Chicago Bears. Da Bears nation, you’ve found your running back of the future. Montgomery made the most of his opportunities last week, rushing for 108 yards and a touchdown against the Los Angeles Rams — who hold one of the strongest defensive fronts in football. Now the Bears will play an underrated defense in the Cincinnati Bengals, who just held Minnesota Vikings star running back Dalvin Cook to just 61 yards rushing. Lightning doesn’t strike twice, so this week, Montgomery will likely see a dip in his production.

Mike Williams, Los Angeles Chargers. If you are looking for success then you gotta go out west. Out of all eight teams in the NFC and AFC West, every single team took home a dub. Williams played a major role in helping his Chargers join the club by catching eight passes for 82 yards and a touchdown. The Chargers will now face a struggling Dallas Cowboys defense that just allowed 379 receiving and four touchdowns to opposing receivers. Fantasy managers who drafted Williams will be pleased to watch him continue to get better.

Michael Pittman Jr., Indianapolis Colts. One player that was a major disappointment in Week 1 was definitely Pittman. After playing as the number one option for the Colts on offense all offseason, he was only targeted four times all game. In his defense, the Seattle Seahawks secondary erased the entire passing game for the Colts, leading to Pittman seeing less opportunities to get the ball. Unfortunately for Pittman, the Colts matchup will only get harder as this week they will be up against Jalen Ramsey and the Los Angeles Rams defense — who just held Allen Robinson to only 35 receiving yards. Pittman still has time to grow into the new larger role as the Colts top wide receiver, but this week, there is no reason to move him into the starting lineup.

Robert Tonyan, Green Bay Packers. Coming into their game Week 1, everything pointed in the right direction of the Packers blowing out a New Orleans Saints team, who had many questions left unanswered headed into this season. Well, once the game finished, it seems the story lines have been flipped. Aaron Rodgers, last year’s regular season MVP, looked terrible. That was horrible news for Tonyan since his value relied heavily on Rodgers’ stellar play last season. However, the connection between the two will get a second chance against a Detroit Lions team that allowed a league high 41 points last week. Look for Tonyan to find his way into the end zone on what looks to be a shootout on Monday Night Football.

Mike Gesicki, Miami Dolphins. Another tight end who didn’t live up to their Week 1 expectations was Gesicki. In a tough matchup against the New England Patriots defense, Gesicki put up a big ol’ donut. The fact that he was not able to bring in a single pass is very concerning for fantasy managers looking for a reliable tight end. Gesicki will look to get a fresh start against a tougher Buffalo Bills defense that held the opposing tight ends to just one catch. Until Gesicki proves that he is a tight end worth investing in, he should remain on the bench.

Ryan Succop, Tampa Bay Buccaneers. Succop has ice in his veins. Last week after the Buccaneers were trailing the Dallas Cowboys, Brady worked his magic and drove down the field for an opportunity at the game-winning field goal. Succop walked up and nailed the 36 yarder for the first win of the regular season. This week, Succop will face a Falcons defense that allowed the Philadelphia Eagles offense to rack up 32 points. With the Buccaneers offense playing as well as they are, Succop should be an automatic start at the kicker position all season long.

Daniel Carlson, Las Vegas Raiders. Succop wasn’t the only kicker drilling clutch field goals last week. Carlson stepped up and hit a 55-yard field goal to force overtime against Baltimore. The 26-year-old has become one of the most reliable kickers in fantasy football, being able to nail kicks from almost any range. Carlson may have a harder time finding an opportunity to get on the board, as the Raiders will be up against a Pittsburgh Steelers defense that just held MVP candidate Josh Allen and the Buffalo Bills offense to just 16 points. Carlson is a solid option going forward, but fantasy managers should be very cautious with him this week.

Denver Broncos Defense. The Broncos defense is back at full strength and looking to finally live up their expectations. Last week, the Broncos defense took control of the New York Giants, keeping them to just 13 points and held Saquon Barkley to just 26 rushing yards. Denver’s defense has become a legit force — especially headed into a favorable matchup against the Jacksonville Jaguars offense. With Jags quarterback Trevor Lawrence still adjusting to the NFL tempo, the Broncos should have no issues putting up another solid outing.

Baltimore Ravens Defense. Luck has not been on Baltimore’s side to begin this season. It is only Week 2 and the Ravens may already have 17 players on the injury reserve list, including notable names like Marcus Peters and JK Dobbins. For fantasy managers, these red flags should be very obvious to stay away from the Ravens — especially since they will be up against the best offense in the NFL in the Kansas City Chiefs. If the managers haven’t already dropped the Ravens defense, now would be the perfect time to do so.