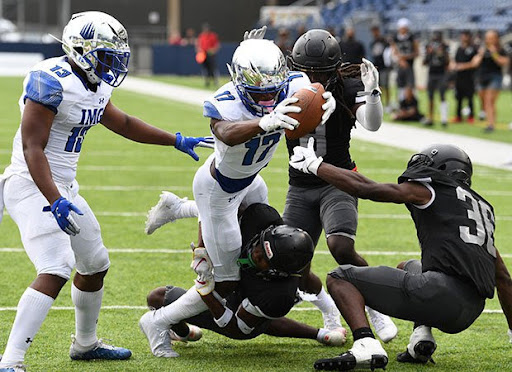 IMG receiver Carnell Tate breaks a tackle and leaps into the endzone for a touchdown. Photo courtesy of Jeff Harwell.

On Aug. 29, ESPN was preparing for an exciting high school football matchup between IMG Academy and Bishop Sycamore. What followed was one of the most bizarre sporting events to air on television.

What was expected to be a tight-fought battle ended in a beatdown as IMG Academy crushed opponent Bishop Sycamore 58-0 — leaving the audience, broadcasters and workers of ESPN confused on what they just witnessed.

IMG has a well-established football program, with a multitude of four and five–star prospects committed to schools such as Alabama, Michigan and Georgia. Bishop Sycamore, however, claimed to have “a number of Division I prospects on their roster,” but no one could verify the legitimacy of the school’s claims.

“There is no school with this name in the Ohio Education Directory System,” Bryant said. “The district has not received enrollment information for a Bishop Sycamore.”

A further look at the list of schools in the Ohio High School Athletic Association gives no results for Bishop Sycamore, either. Their website is currently down for “maintenance,” and a search across social media platforms yields no verified users or accounts for the school.

One would think that a school good enough to play IMG Academy would have at least ONE verified platform, right?

A quick glance at the lack of a Bishop Sycamore roster reveals even more plot holes. Their MaxPreps roster has only one player and one staff member listed. Even more troubling, the one player, Anthony Kluzak, appears to be a man in his 50’s who plays for South Carolina State. Regardless, who the other players are that played on Sunday — it’s seemingly impossible to verify any names of players.

According to Kluzak’s profile, Bishop Sycamore played a game two days before playing IMG, giving the players only two days of rest before playing one of the premier high school teams in the nation. Not only were these kids nowhere near the skill of the IMG players, they were given an unhealthily short amount of time to rest and recover for their next game.

So why and how did ESPN allow for this game to be scheduled and aired? No one absolutely knows for sure. The main theory is that Bishop Sycamore lied about the quality of their players during a press release and to ESPN.

Regardless, this rare lapse in judgement by ESPN would lead to a storm of memes, fake ‘Bishop Sycamore’ social media accounts, merchandise made by Barstool Sports, and most importantly, concerns regarding the health of the players and questions surrounding the leaders of this “B.S” program.

After the game, Bishop Sycamore head coach Roy Johnson was let go, according to Andre Peterson, the founder of Bishop Sycamore. Poor tracking of the team’s injuries was listed as the reason for Johnson’s departure from the team.

Johnson is facing a multitude of charges as well. He will go on trial for defaulting on a 2018 loan for $100,000 that was never paid back to First Merchants Bank. He is also currently facing a 2019 lawsuit from ARN hospitality, where he housed his previous football program before one of their games, and never paid the hotel. ARN claims Johnson owed them $110,685 — which he still has not paid back.

To top it all off, Ohio Gov. Mike DeWine has asked for an investigation to be commenced in order to find out how Bishop Sycamore got started.

This game and its consequences shouldn’t have happened. If ESPN and the organizers of the match took even five minutes to check out Bishop Sycamore, they could’ve caught the red flags and stopped the event from ever happening.

It put kids — who were wildly at a disadvantage — at risk of being seriously injured. Funny enough, one of the players did get injured but was not listed on the roster given to the ESPN commentary team. The fact that Bishop Sycamore played a game two days before, and nothing was done to stop the game after that, is ridiculous. Two days is not even close to enough time to allow someone to recover from a football game, and ESPN should be held accountable for allowing this unfair — and unsafe — game to be played and airing it in front of the whole nation.

Last week’s game could go down in sports history as the strangest high school football match ever. How a school with no roster, no location, no records and no wins in its history was able to play a nationally televised game versus arguably the best high school team in the nation — the world may never know.