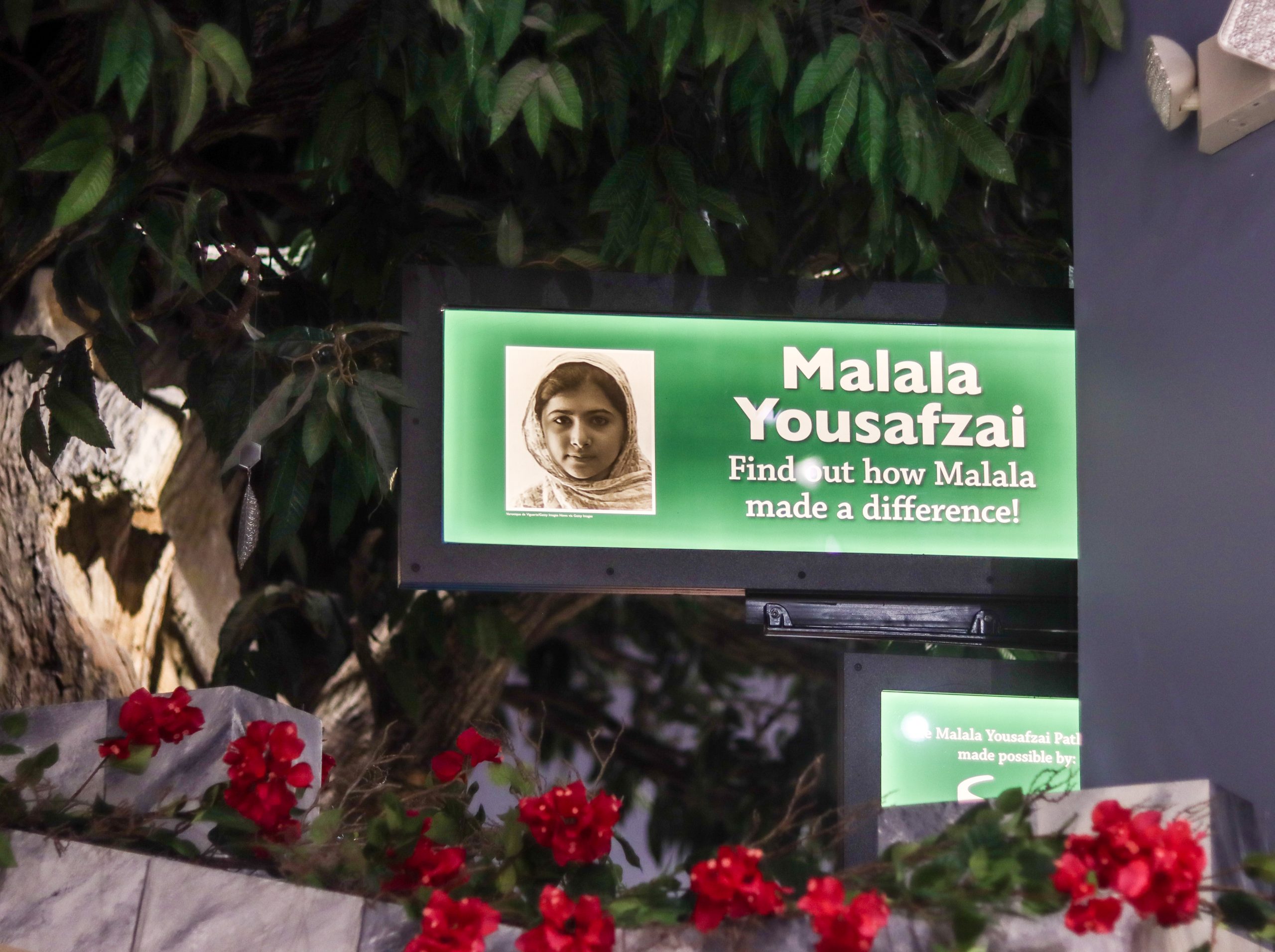 This sign marks the entrance to the new Malala Yousafzai exhibit at the Indianapolis Children’s Museum – the only permanent exhibit featuring her story in the world.  Photo by Grace Denckhoff.

On Sept. 17, The Children’s Museum of Indianapolis opened the only permanent Malala Yousafzai exhibit in the world. Malala joined Anne Frank, Ruby Bridges and Ryan White in the “The Power of Children” exhibit. The exhibit offers the opportunity for children to learn about other young people who have made a difference.

Malala is a Pakistani activist who advocates globally for women’s education. She grew up in the Swat Valley, where the Taliban took control in 2007. Malala began her activism at the age of 11 by writing an anonymous blog. By campaigning for her right to go to school, Malala and her father both became known throughout Pakistan. This gained the Taliban’s attention and made her a target. In 2012, Malala was shot on her school bus by a member of the Taliban for her campaigning actions. After her recovery, Malala and her father established the Malala Fund. This fund is dedicated to women’s education and achievement. In 2014, she received the Nobel Peace Prize and became the youngest Nobel laureate ever at age 17.

The exhibit features a recreation of Malala’s house in the Swat Valley, as well as information about her life with interactive features. There is also a sound and light show and a live performance about Malala and her story available to watch several times a day at the museum.

The exhibit emphasizes the power of education. Miranda Mejia, senior elementary education major, shared her thoughts after visiting the exhibit.

“I thought it was incredibly well done,” Mejia said. “The entire exhibit is created to talk about influential people who, in some ways, can be controversial and start these conversations with children. The Malala exhibit did it in truly the best way.”

The children in the exhibit faced adversity at a very young age and stood for things that were not accepted at the time. Anne Frank was persecuted for her ethnicity and faith, Ruby Bridges was harassed for being one of the first African Americans to integrate into an all white school and Ryan White received pushback because of the stigma surrounding AIDS. By featuring these children, the exhibit can teach children empathy and widen their perspectives.

While most Americans do not have to worry about primary and secondary education, girls across the world are deprived of the opportunity to be educated. Human Rights Watch reported that only 13% of girls in Pakistan are still in school by ninth grade. In comparison, 91.3% of women in the U.S. finish high school.

The Malala exhibit reminds visitors that many people do not have the same privileges that most Americans do. Progress has been made, but there are miles to go in the global struggle for women’s rights. Susie Kramer, senior communication sciences and disorders major, talked about how this exhibit can start conversations and inspire activism.

“It’s such a guarantee that women can be educated in the U.S., so it’s important to recognize that that’s not everyone’s reality,” Kramer said. “Hopefully it can build empathy and put people into action.”

Malala has become a very inspiring figure, especially among the younger population. Thanks to this exhibit, her story and message can reach even more people. According to the museum’s mission statement, their goal is transforming people through the power of learning and experience and to include diverse voices to help facilitate this learning. According to Mejia, the exhibit is a big step toward that goal.

“As a nation, I think that we tend to struggle educating ourselves on more difficult subjects,” Mejia said. “This exhibit in The Children’s Museum allows kids, parents, educators and the museum as whole to really gain understanding of a subject as difficult as Malala [and her story].”

Malala’s story is inspiring. She faced oppression and threats but has continued to advocate for women’s education. Dr. Natalie Carter, senior lecturer of the English department and affiliate faculty of race, gender and sexuality studies, emphasized Malala’s courage.

“She has done this work in an area of the world that has been in almost-ceaseless conflict her entire life,” Carter said in an email to the Butler Collegian. “She remains a vocal and visible advocate for nonviolent activism. She is almost incomprehensibly brave.”

Tickets are available on The Children’s Museum of Indianapolis website. The museum is open Tuesday through Sunday from 10 am to 5 pm, and there are a variety of indoor and outdoor exhibits to enjoy.