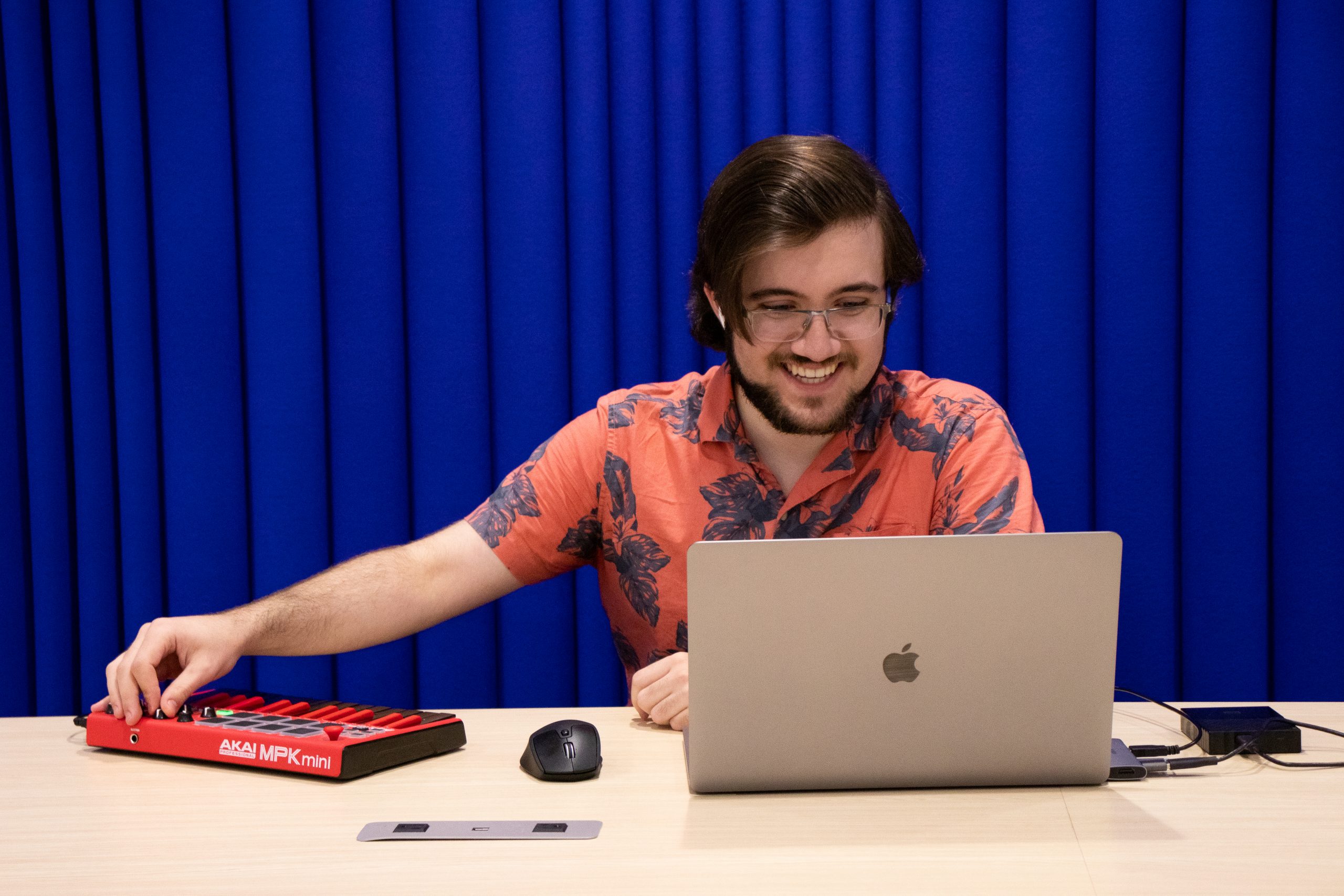 Alex McGrath, senior music composition and computer science double major, creates music on his laptop with his mini studio. Not only does McGrath create film scores and electronic music, but he also composes his own music and will be releasing an album later this year. Photo by Ben Caylor.

Alex McGrath, a senior music composition and computer science major, has finally completed his debut album: “In My Head.” A testament to growing up and coping with anxiety, this eclectic project features music from just about every genre, from pop and R&B to cinematic and orchestral. The album will be released on Oct. 1 on all streaming platforms. McGrath shares his thoughts on what this project means to him.

The Butler Collegian: How long has this album been in production?

Alex McGrath: So, this process, it’s kind of interesting how it started. I was messing around making some electronic music for the first time in a long-time last summer because I was stuck at home for COVID, and it’s been awhile since I’ve messed around in FL Studio [A digital audio workstation that allows users to create music through digital sound]. So, I said, “Why don’t I just produce a song?” I have a nasty habit of when I start working on a song to then have a bunch of ideas for other songs. And so one song turned into three [and then] three songs turned into six. I added an extra song in the winter, and then I brought it to my teacher, Dr. Felice. He suggested I had two more songs and make it an album, and that’s kind of where it was finalized.

TBC: How many songs are on the album?

AM: There are nine songs.

TBC: What inspired you to get into electronic music and specifically to produce this album?

TBC: Who are your music influences? Which ones can we hear on this album?

AM: I have one for every genre that inspired me a lot. There are little bits of [electronic rock band] Muse, [dubstep artist] Deadmau5 and Ludwig Göransson, who is a film score composer. I love all those artists, and they’re all on my playlist.

TBC: How would you describe the sound of the album?

AM: Yeah, this is the grab-bag. I’m trying everything. It is my freshman debut album, so I don’t have a style nailed down or fans are telling me do this or do that, so I’m trying a little [of] everything and seeing what sticks. I enjoy all these types of genres. There’s anything from pop to R&B, to cinematic to soundtrack retros, almost 8-bit. Very retro vibes, all sorts of things are in there. Hopefully, a little something for everyone. And that’s kind of where I’m going to put my foot on it.

TBC:  What inspired the title of this album? What is special about the words “In My Head”?

AM: The reason that it’s called “In My Head” is that in all three of the tracks that I have on [the album] that have lyrics, my vocals are very deeply personal about my struggles. I had a lot of struggles from a variety of things that really got flared up with COVID-19. I’m a very social outgoing person, and being locked up is difficult, and it makes you think. I spent a lot of time in my head, thinking about social issues and stress. And so, I found that writing songs about it was a really good way for me to articulate this both for myself and for other people who are experiencing the same things. I wanted to sum up exactly how that feels and give my take on what I’ve experienced. It’s really interesting because [COVID-19] helped my music process because I’m stuck at home writing more music more often, but also, I felt a little detached from a lot of people in public life because I spent so much time working on it. This was basically my free time when I was in junior year. Last year, I just finished my classes most days, then I would just come home and do some more production, mastering, mixing, whatever it is that I need to do.

TBC: Can you describe your recording process on an individual song?

AM: I do everything from the very beginning to the very end. I start pretty much every track looking for ideas, finding instruments, then audition a lot of samples and VST plug-ins [Virtual Studio Technology, software that integrates digital sounds into the Digital Audio Workstation] to see if there’s something that fits what I’m feeling. A lot of the time, I don’t have any clue, especially when I’m starting something new. The only thing I know is that I want to do something that’s not what I just did. And so, I’ll try something new and see if I get anything that catches my fancy. Once I get a feel for where that piece is going. I start working towards that direction. It really is a “mad science” type approach. You really have to be open to exactly what you’re feeling if you want to get the best result. You just have to let whatever happens guide you towards “This sounds almost like what I want, but what can I do to change it and make it right?” Or “I know, I wanted this track to be more of a pop inspired track. Then where’s my guitar?”

TBC: Outside of the production, what does your songwriting process look like?

AM: I come from a background of classical composition and film scoring. All these things where you can come up with any sound and instrument. None of that has lyrics. And so, this album was the first time I’ve produced anything with my voice on it. I’m not really a trained singer. That’s to say that really everything in there is coming from my heart. I haven’t messed around with songwriting, so this is just me talking about my [deeply personal] experiences.

TBC: What lies ahead for you as an artist?

AM: So much lies ahead. I already have three or four rejects from this album, or things I just never finished in time or I started working on very late in the process and didn’t make the cut. Those songs might go on a future album. There are so many things I do. I try so hard. I listened to some cool time delay and editing on some vocals on a track recently, and now I want to mess around with it. A skill becomes a song. I like that way of looking at things. I really love learning.

TBC: How has your computer science degree influenced your music/this album?

AM: Computer science is a very vague field. It really means studying how to code, and that’s about all that. It means you can do anything with coding. So, there are actually a lot of opportunities for doing computer science-related gigs with music. One of the ones that I’ve been really interested in and that – if I had more time in the day – I would start right now is programming different VST plug-ins and software for musicians, to be able to create sound effects, all of that done with code.

TBC: What is the overall message of the album?

AM: It’s okay to be in your head. That’s where you do a lot of soul-searching, and it’s okay to do that if you’re struggling as well. If you really feel like you have the weight of the world on your shoulders, don’t be afraid to share that message with others because there’s always people out there who want to help you, who want to share that experience with you. And when you do share experiences, you’ll find that a lot of people are going to the things that you’re going through.

McGrath is just getting started on his music journey. He plans to attend graduate school for film scoring while continuing to produce more albums.