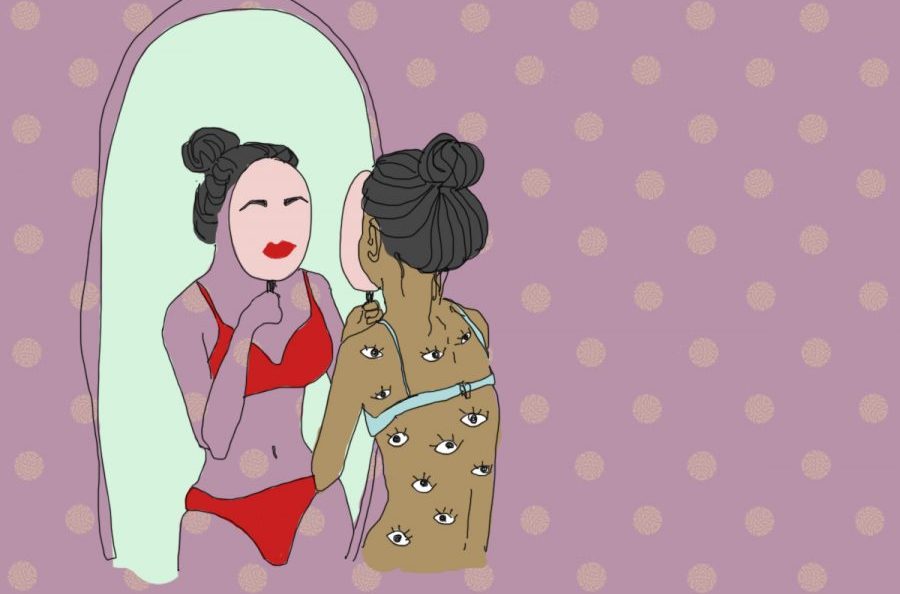 Are you a female college student with a constant feeling of internalized voyeurism? If so, you’re not alone. The “male gaze” has been a particularly hot topic on social media and amongst college students across the country. This phenomenon is the lens through which patriarchal institutions influence the way women view themselves and others, often promoting objectification and unwarranted standards of dress and behavior for the benefit of men.

The male gaze is best described by its frequent symptoms. For instance, when you’re driving on the interstate with your windows down and change your music to fit a character in a coming-of-age movie that the audience can’t help but fall in love with. Or when you’re sitting, laughing with your friends but see a group of guys your age walk by and immediately straighten your posture and fix your hair, regardless of your actual interest in them.

Although the most common example of the male gaze’s relevance in the lives of non-men everywhere is, obviously, relating a little too much to the “cool girl” monologue, there are countless others. So, it’s no wonder that in a time of newfound independence, uncertain beginnings and various other unfamiliar factors are deeply intertwined with a thought process that preys on women’s obsession with perception. It’s especially relevant as students return to a previously dormant party scene with over a year’s worth of lost time to make up for.

So, how does the male gaze influence the lives of students as they head off to campus events?

Junior pharmacy major Moni Krasteva explained her personal encounters with the male gaze and how those encounters increased once she began attending events alongside her sorority sisters.

She said that it felt like there were two primary options for how she chose to dress: for the male gaze or to avoid the male gaze.

“You’re going to a frat where there’s a ton of boys,” Krasteva said. “There’s two ways you can go, you either want to attract somebody’s attention or you just want to blend in. That discourages you from… wearing what you want.”

First-year strategic communication major Hana Anderson said that she was especially aware of the unique pressures of attending college parties as a new student — namely that entrance into parties requires the approval of fraternity members.

“[Fraternity members] look at you when you come in and they decide if you can come in,” Anderson said.

Anderson also said she felt that there’s a sort of intangible “hot girl standard” that she is constantly pressured to live up to. As with many other young women, she finds herself focusing on looking ‘good enough’ and feeling insufficient when she is unable to do so.

Nate Corrales, a junior management information systems major, recalled his own experiences of getting ready for a party with his female friends. Corrales said that sorority members would often ask him about the environment of the party.

“That’s usually what decides what to wear and the attitude of what the night is going to be,” Corrales said.

Both Krasteva and Anderson frequently referenced a need to wear more form-fitting clothing and dressing less for comfort to measure up to the women around them. Corrales, though a deep lover of fashion himself, admitted that he never felt any sense of anxiety around his outfits, regardless of the type of event he was attending.

“It’s never, ever been something stressful or something where I have to worry about how somebody’s going to treat me with it,” Corrales said.

This take directly contrasted with Anderson and Krasteva’s experiences of the stress they felt when preparing to go to a party.

“I would risk putting myself in discomfort just to… feel acceptable,” Anderson said.

Maybe the harshest truth about the male gaze is how it manifests itself in reality. Krasteva said she has never received direct backlash for her outfit choices the way her internal dialogue anticipates. However, Corrales said while he doesn’t think it’s always mal-intended, he has noticed a direct correlation between how women dress and how they are treated, specifically in these kinds of social settings.

As if the experiences of these students weren’t depressing enough, it should be mentioned that the male gaze is not merely a determinant of style. Rather, it is something that dictates most factors of how women present themselves: what they say, what they don’t say, how they sit, how they stand, what they consume, where they go, and more. Likewise, the male gaze is not a single-gender issue. Everyone is influenced by a desire to impress those around them, and most of our standards for what is impressive stem from T.V. and movies, advertisements, literature and every other facet of popular culture.

In a society wherein men are objectively advantaged, the male gaze is bound to permeate every aspect of our lives.

So, what now? If a campus of some 5,000 students can’t flip a narrative shaped by all of human history, how do we, at the very least, stop actively perpetuating such a harmful thought process? For Corrales, this starts with opening a dialogue whenever you can.

“Sometimes it just takes that personal experience from a friend,” Corrales said. “To the girls that are feeling that way, express that.”

Every man reading this should listen when your friends talk about the pressure to fit in for the sake of others and correct other men when they say or do something that contributes to the male gaze — whether that be through sexist or degrading comments, setting standards for the appearance of women or judging women who you believe don’t meet impossible societal expectations.

And for the women?

“Don’t dress to impress anyone but yourself,” Krasteva said.

After all, when the male gaze affects you even when you’re completely alone, the negative feedback is coming from your own thoughts — in the immortal words of Margaret Atwood, “you are your own voyeur.”