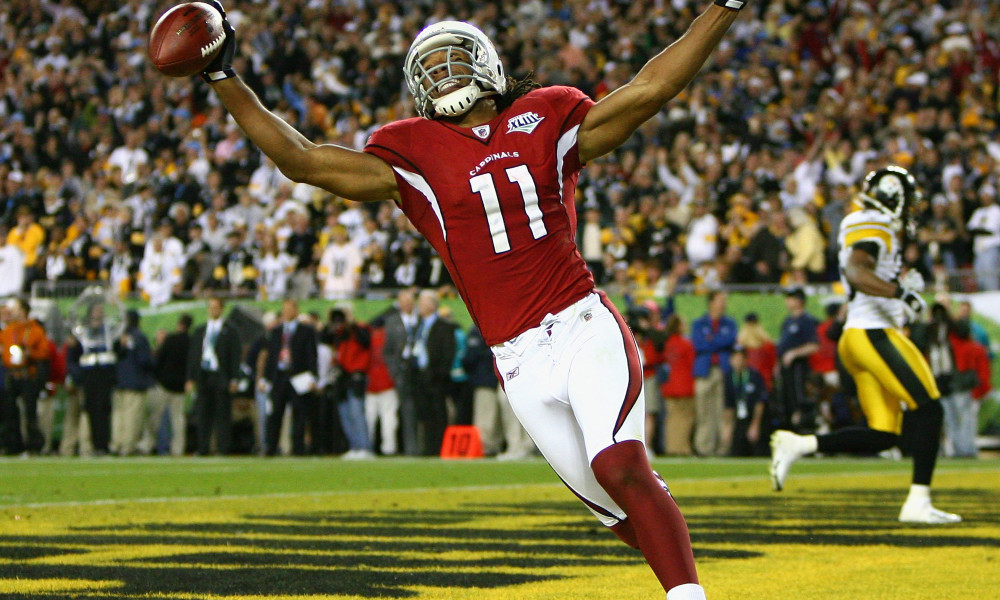 Larry Ftizgerald celebrating in the endzone after scoring a 64-yard touchdown to give the Arizona Cardinals the lead with 2:37 remaining in Super Bowl XLIII. Photo Courtesy of https://www.azcardinals.com.

For the last few weeks, it was unclear whether Arizona Cardinals legend Larry Fitzgerlad would continue to defy father time and add to his future Hall of Fame resume as one of the greatest receivers of all-time.

This past month, the NFL got its answer.

“I just don’t have the urge to play right now,” Fitzgerald said during an interview on SiriusXM’s “Let’s Go” with Tom Brady and Jim Gray on Aug 20.

“It’s a completely new thing,” Fitzgerald said. “I’ve never felt it before. That’s why I just needed to take the time to make sure I was making a good, clear, conscious decision and that’s what was in my best interest.”

While Fitzgerald still leaves the door open on the possibility of returning another year, if he were to never set foot on the gridiron again — it wouldn’t impact his legacy on the game.

After 17 seasons in the NFL, all with the Arizona Cardinals — Fitzgerald has nothing left to prove.

The 11-time Pro Bowler would finish his career with 17,492 receiving yards and 1,432 receptions, ranking him second-most all-time only behind Hall of Famer Jerry Rice. He also adds 121 touchdowns to his name — which ranks sixth all-time among receivers.

Fitzgerald has been THE model of consistency throughout his career. Fitzgerald has only missed a total of nine games out of the 263 he’s been eligible to play in. Three of which only came due to COVID-19 protocols during the 2020-21 season.

A more eye popping statistic is that even though Fitzgerald has had 34 quarterback changes throughout his career, he has still demonstrated his reliability as receiver as he has racked up more tackles, 39, than he’s dropped passes, 29.

Larry Legend has also been clutch when it matters. During his time in the postseason, Fitzgerald became the only NFL player since 1950 to have a streak of four straight playoff games with 100+ receiving yards and a TD catch.

He’s left his mark with legendary moments in the playoffs, such as his huge back-to-back catches and touchdown against the Green Bay Packers in overtime to send his team to the NFC championship game in 2016 and his iconic touchdown in Super Bowl 43 — which we’ll get to in a moment.

Beyond the gridiron, Fitzgerald has demonstrated the character of a man which we should all strive to be like.

He’s invested his time into numerous philanthropic pursuits such as establishing the “Larry Fitzgerald First Down Fund” to support kids and families in crisis and the “Carol Fitzgerald Memorial Fund” in honor of his mother, to help educate urban youth about HIV/AIDS and breast cancer issues.

These — along with other philanthropic endeavors — have earned him the recognition of being named the 2016 Walter Payton NFL Man of the Year, as well as the recipient of multiple humanitarian awards for his contributions to his community and his life’s work.

Even with dozens accolades to his name and being beloved unanimously among NFL fans, the biggest criticism Fitzgerald faces is lack of the ring — an achievement that has eluded him throughout his career.

Fitzgerald had it within his grasp during Super Bowl 43 after he scored a 64-yard touchdown with under three minutes left to give his team a three-point lead. Unfortunately for Fitzgerald, his all-time highlight was outdone by Steelers wide receiver Santonio Holmes, whose famous tip-toe catch in the back of the endzone ultimately stole Fitzgerald’s ring in the final seconds.

As Fitzgerald’s production has slowed in his twilight years, it seems the only thing that keeps him coming back is his relentless pursuit of bringing a Lombardi home to Arizona.

“[The] desire to compete and to be part of something that is much bigger than you, [it’s] the main reason, and obviously the pursuit of the Lombardi Trophy,” Fitzgerald said. “You have to be in love with the process of pursuing the Lombardi Trophy, and that’s the part that’s most important.”

Being the man that Fitzgerald is, it’s doubtful that after 17 seasons of putting in the work day-in and day-out that he would shortcut the process of winning a Lombardi. Fitz knows that in order to win a title he has to be all-in from start to finish.

If at the age of 38 years old he admits that he doesn’t have the desire to do all that for one more go around — then that’s okay!

Throughout his entire career in Arizona, he’s done nothing less than give his team a fighting chance every season — only to be let down by lack of stable quarterback play and mismanagement by the front office.

Even with the few years of quality quarterback play by Kurt Warner and Carson Palmer, those teams ultimately collapsed at their do-or-die moments in the Super Bowl and NFC championship game, respectively.

Anyone who’s been around the game of football long enough knows that it takes an entire team’s effort to win a Lombardi — not just one individual.

In Larry’s case, he’s done everything he possibly can on his end. He’s demonstrated what it means to be a class act and has set the gold standard for how a superstar should compete and represent his team inside the painted lines and out.

Doubting his legendary status because he wasn’t able to bring home the greatest team achievement of all-time wouldn’t just be plain wrong — it would be absolutely asinine. He’s proven that he’s more than worthy of his title of “Larry Legend” and that his career is one for the ages.

In the end, whether Fitzgerald decides to give it one more go around, or ride off silently into the Arizona desert — hats off to your extraordinary career Fitz!