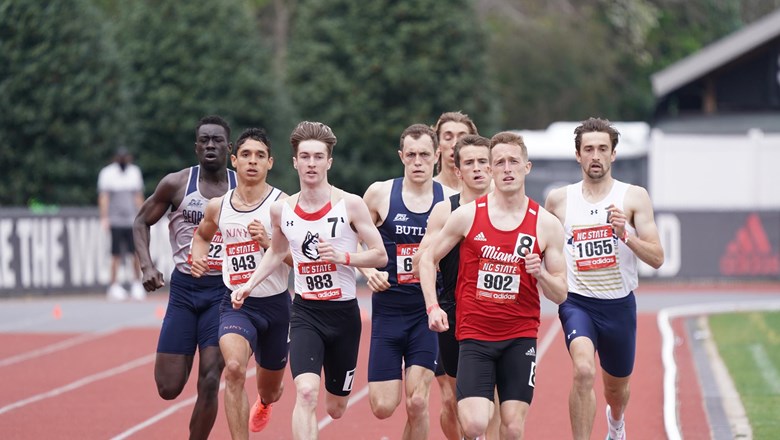 A group of runners compete at the Redbird Invitational in Normal, Ill. The Bulldogs finished second in the event. Photo courtesy of Butler Athletics.

Four meets into the season, the Butler track and field team is off to a red-hot start, filled with broken records and standout performances. After a 13-month gap in between seasons, the Bulldogs proved they were ready to get back onto the track and compete.

The season began for the Bulldog women on Feb. 18 at the Ball State Tune-Up in Muncie, Ind.

Junior Karmen Koch led the way, taking home wins on the field in shot put and long jump with marks of 11.46 meters and 5.34 meters. Freshman Jill Volgerran ran the sixth-fastest time in program history in her first appearance as a Bulldog, with a time of 58.88 in the 400-meter race. As a team, the women placed second out of three teams and just behind host Ball State.

One week later, the men made their debut at the Big East Triangular against DePaul and Marquette hosted by the Blue Demons.

The 4×400-relay team of freshman Thomas Pitkin, freshman Issac Kane, junior Trey Harris and senior Jacob Uhl broke the six-year-old school record with a time of 3:16:53. The Bulldog men won the meet as a team finishing with a score of 56 points while the women came up short in third place.

The Raleigh Relays, a meet compiled of a 70-team field including some professional teams from Nike and ASICS, took place on March 25. What came next was a historic outing for the Bulldogs.

In his Bulldog debut, graduate senior Brendan Watkins, who transferred from Missouri Southern State University, crushed the school record in the long jump with a distance of 15.34 meters. When told how long the record stood before he broke it, Watkins was taken aback.

“Well, honestly, it was funny because I knew the record was old, but I didn’t know it was 51 years old,” Watkins said. “I was really happy to do it in my first meet and hopefully I can extend that record even further the rest of the year.”

Other individual accomplishments included graduate student Euan Makepeace, who in the 5,000-meter race, ran a time of 13:44:18, which currently ranks second nationally across all NCAA Division I schools. Pitkin and Uhl added on with new records of their own in the 400-meter race running times of 47.61 and 47.75 that stood since 1927.

On the women’s side, senior Carson Fields followed with two new school records in the 100-meter and 200-meter races. This was not Fields’ first time breaking these school records.

“I remember breaking records freshman year and then my teammates breaking those,” Fields said. “I’m just ready for one of my teammates to break my record so I can break it again.”

Senior Angelina Ellis joined the mix in the 3,000-meter steeplechase running a time of 10:16:33 ranking second on the Butler all-time list. Junior Corinna Pena and sophomore Katherine Olsen took the top two places in the 1,500-meter race adding to the top-10 list in Butler school history.

On April 2, the Bulldogs reached their halfway point of the season at the Redbird Invitational hosted by Illinois State University.

The men started with more success, with Pitkin claiming his third school record of the season, this time in the 400-meter hurdles, in a time of 52:70. Freshman Drew Herman made his debut in the high jump, winning with a mark of 1.92 meters.

In the women’s competition, senior Rebecca Collester won the 200-meter race in a time of 24.19. Fields also took home another crown in the 100-meter race clocking a time of 11.68.

As a team, the men placed second out of ten teams with a score of 133 points just behind the host Redbirds. The women finished with 76 points, placing fifth out of ten teams.

Four meets into the season, head coach Matt Roe shared his excitement about all the recent accomplishments.

“It really feels like a collective leader and movement towards trying to become an elite program,” Roe said. “I think we have a chance to have one of our largest groups represented at the NCAA level.”

The Bulldogs will look to continue their hot streak during the next meets on April 16 against Eastern Kentucky and at the Gold and Black Invitational at Vanderbilt University.