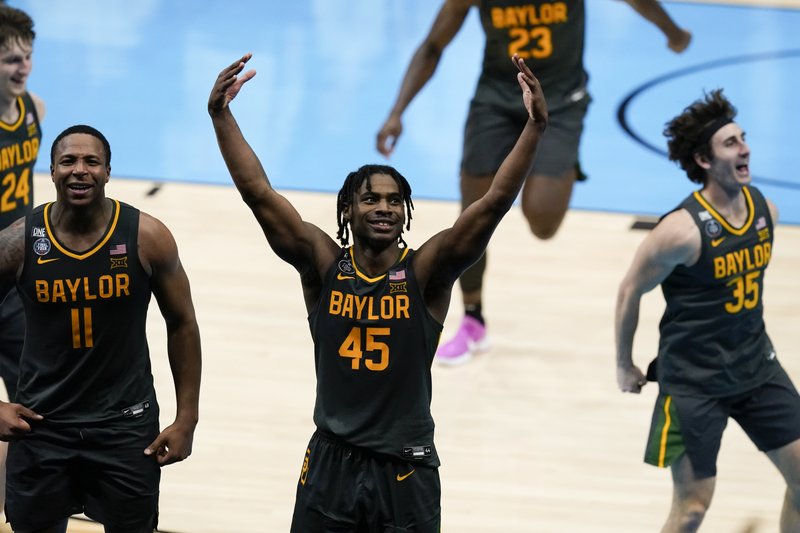 Baylor celebrates after winning the NCAA National Championship over Gonzaga, 86-70, their first in program history. Photo by Associated Press.

I bet you didn’t expect that, did you?

The Baylor Bears walked into Lucas Oil Stadium to compete for an NCAA National Championship as clear underdogs against undefeated Gonzaga, the heir to the “best basketball team ever” throne. The Bears cruised to a 86-70 win.

From the opening tip, the Bears dominated every facet of the game, jumping out to a 29-10 advantage in the opening 10 minutes.

As the Bears coasted to a national title with relative ease over Gonzaga in a matchup of the top two teams in college basketball, Butler fans may have felt a case of déjá vu.

It’s because, led by Butler-grad Scott Drew, Baylor turned the formerly low-achieving Bears program into a high-major powerhouse that reflects the characteristics that have come to define Butler men’s basketball over the last decade.

Those familiar with the history of basketball in the state of Indiana have a shared awe with the accomplishments of the Drew family.

Homer Drew, who spent over 30 years climbing the ranks of universities in northern Indiana, is a 2019 inductee to the College Basketball Hall of Fame. In 1998, Homer led Valparaiso to the Big Dance, where his son, Bryce Drew, connected on one of the most famous shots in NCAA Tournament history.

And then, there was Scott.

Scott — the only one in his family to not play college basketball — instead enrolled at Butler, where he was a member of the Delta Tau Delta fraternity and student manager for Butler men’s basketball. He would eventually graduate with a liberal arts degree in 1993.

In true Butler fashion, it had seemed that Scott was the forgotten one of the bunch, facing the unlikely odds to be a major name on the national college basketball landscape.

And that’s when he found Baylor.

Baylor, a program stricken by a scandal that saw its coach fired and a mass exodus of its best players, had little hope of winning anything. Then, Baylor hired Scott Drew in 2003 after he’d served as an assistant at Valparaiso under his dad for nine seasons.

Baylor had been to the NCAA Tournament just once in the last 50 seasons and had no wins to show for it.

Drew’s tenure began slowly, winning a combined 21 games in its first three seasons, but the Bears were not basement-dwellers for long as Drew began molding his Butler look-alike.

The key for Drew was in what he knew from his days at Butler: recruiting gritty and talented — but not overly popular — players to play for his program, including the likes of Taurean Prince, Johnathan Motley and Pierre Jackson.

Drew didn’t always carry a reputation that suggests a national championship was in the cards, though. Specifically in the 2016 NCAA Tournament, the 5-seed Bears were upset by the 12-seed Yale that produced an all-time NCAA Tournament press conference moment, Full of disappointing performances come March, Drew was known as an underachiever.

This year, that all changed.

Jared Butler — no known relation to Ovid — was the do-it-all point guard of this year’s Baylor team.   Butler became the first player since Carmelo Anthony in 2003 to record 20 or more points and seven or more assists in the National Championship game, but wasn’t even considering Baylor out of high school. Baylor spurned the four-star recruit because of a lack of available scholarships.

Davion Mitchell, who averaged 3.7 points per game as a freshman at Auburn, transferred to Baylor thereafter and saw huge improvements in his game. Mitchell earned his way to the All-Tournament team and has shot up draft boards as a now-projected top 20 draft selection.

MaCio Teague started his college career at UNC Asheville, where he was named 2017 Big South Freshman of the Year. Teague averaged 15.9 points per game for the Bears this year.

The list goes on and on. Adam Flagler started his career at Presbyterian College. Matthew Mayer looks more like a country singer than a D-I college basketball player. Jonathan Tchamwa Tchatchoua has a name harder to say than he is to guard.

The oft-forgotten Scott Drew surrounded himself with other misfits in a Baylor program that emphasized putting the team above itself, playing defense-first basketball and caring more about the name on the front of the jersey than the back.

Sound familiar? Drew and staff used “The Butler Way” to earn themselves a win on the NCAA Tournament’s biggest stage. Theirs was a team of no-names in relation to the stars of Gonzaga: Jalen Suggs, the Mr. Basketball and Mr. Football of Minnesota his senior year, is a projected top-3 pick in the NBA Draft. Drew Timme, whose mustache has a bigger personality than the entire Bears roster, was making waves in the tournament. Corey Kispert, a First Team All-American, brought his hot shooting to the table.

All year, Gonzaga has been talked about as possibly the greatest college basketball team of all time, while Baylor quietly went about their business as the No. 2 ranked team in the country.

While Gordon Hayward’s shot at the buzzer may not have banked home and Butler still doesn’t have any National Championship banners from the 21st century hanging in the rafters, Butler can tip a cap to one of its own for endorsing their style of play and attitude of winning to taking down Goliath on the sport’s biggest stage.