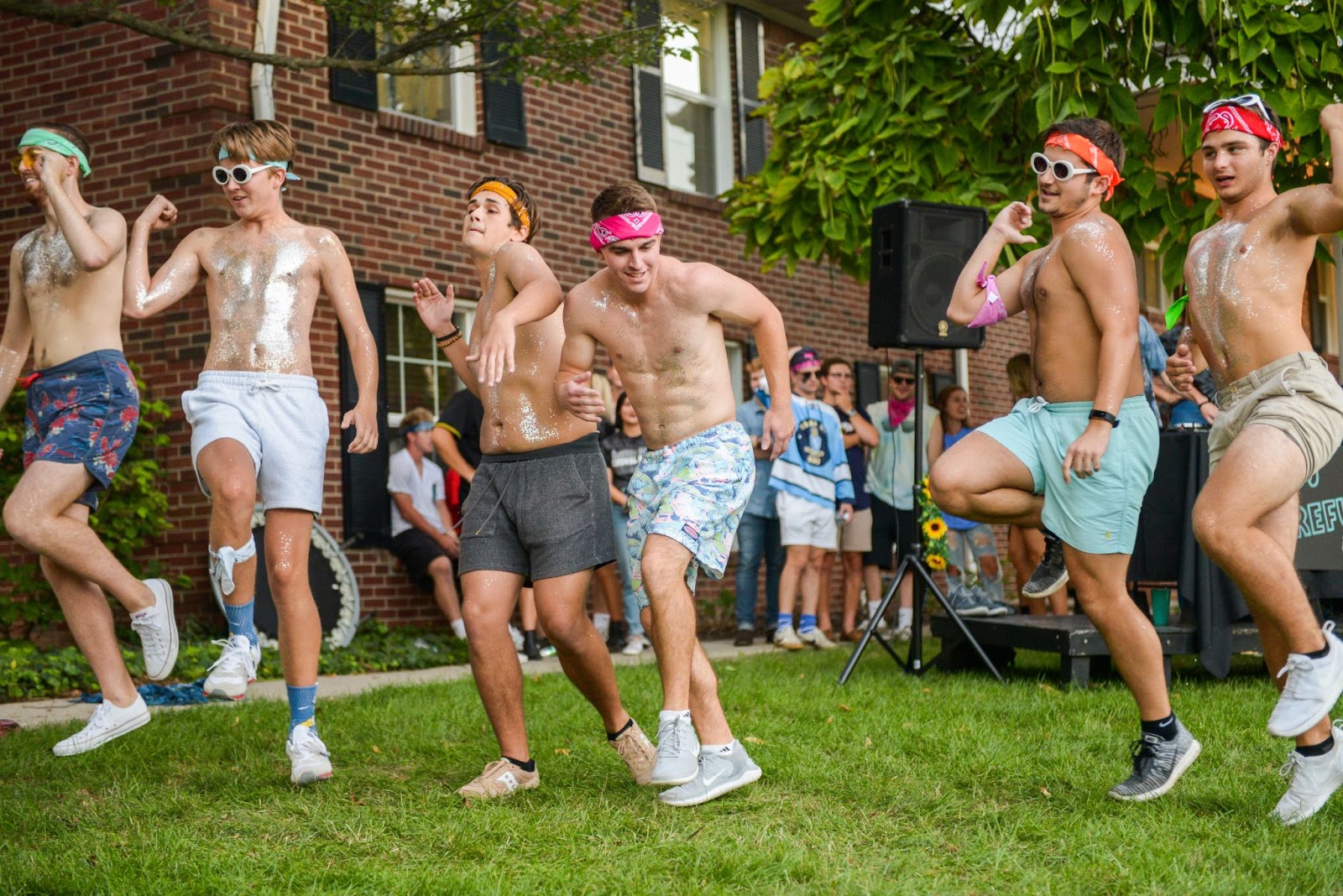 When I went through recruitment my freshman year, I still felt hesitant about Greek life. I proudly consider myself to be a feminist, and I was fearful that joining a sorority would somehow invalidate my feminism or brand me as a dumb, stereotypical sorority girl with zero individuality.

I am lucky to have surrounded myself with women who empower me and lift me up within my own house and others, but I cannot shake the feeling that I am being weighed down by the system.

Butler’s Greek system — and Greek systems nationally — prioritizes men and imposes Victorian standards on female sexuality and conduct. And there are examples to prove it in many facets of Greek life: philanthropy events, recruitment practices, alcohol policies and so many more.

The first big philanthropy event I went to for my sorority – called Disco Phiver – was during the fall of my sophomore year. Mostly, I was just excited to wear my sparkly disco flare pants and put on pink eyeshadow, but I was also dying to see the fraternities perform their self-choreographed dances — known as lip syncs — on our lawn.

Group after group of intoxicated men stumbled onto the lawn, ripping off their shirts to reveal glittery Alpha Phi letters on their bare chests and dancing in a way that can most modestly be described as provocative.

I have never participated as a dancer in a lip sync, but I know for a fact that if any sorority team showed up half-naked and under the influence, it would not fly. Sorority lip-sync teams must have their music, outfits and any pre-recorded videos approved by Butler’s Panhellenic Association, leaving no room for overt provocativity.

Sula Frausto, a junior dance pedagogy major, said that when she participated in a lip sync for Sigma Nu’s philanthropy week, Butler’s Panhellenic Association — informally known as PHA — told the participating teams that they were not allowed to wear crop tops or anything else that might be considered “too revealing.”

“I know another sorority, they had cut too many holes in their shirts and then had to re-film the whole thing because it was too revealing,” Frausto said. “So when we were distressing our own shirts to sort of follow the theme, we had to make sure that every cut was really small, not in any areas that would be deemed inappropriate, whereas I feel like in a lot of frat lip syncs, they are ripping off their shirts or, you know, the dress code is a lot less strict for them.”

Interfraternity Council — known as IFC –– has different rules. Ethan Muchnicki, IFC president and junior healthcare and business major, said in an email to The Collegian that the council has an executive member attending all lip syncs in “live time.”

“The chapters are expected to follow proper guidelines for these, which are similar to what PHA follows,” Muchnicki said in an email. “If these rules are broken the chapter in violation is subject to IFC Conduct Board meeting(s).”

Muchnicki did not specify what the guidelines entail.

Ryan Gernady, a junior environmental studies major, said that when he performed in a lip sync for Alpha Phi’s philanthropy week, he was not aware of any approval process implemented or enforced by IFC.

“I would say [the lip sync] was kind of sexual, but I mean, we had fun with it,” Gernady said. “And then all I remember is that we had to shake the president’s hand before we danced… to make sure we were sober enough.”

The thing is, it’s entertaining to watch drunken frat boys twerk. Not that I can dance, but why can’t I do that, too? Why are men allowed to be overtly sexual when women are not?

The double standards don’t stop there, either.

On April 6, Sydney Kastelitz, a junior strategic communication major, filmed a lip-sync video on TikTok for Lambda Chi Alpha’s philanthropy week and submitted it to PHA for approval. The video was not approved on the basis that the three girls pictured were not following COVID-19 social distancing guidelines in two of the shots.

One of the two clips in question depicted the three girls sitting next to each other on a teeter-totter that had been placed in Lambda’s front lawn as a part of their philanthropy event: a teeter-totter-thon. The goal of this teeter-totter-thon — which was approved by Sarah Cohen, the director of fraternity and sorority life — was to have people riding the teeter-totter twenty-four hours a day throughout the week to raise money for Peyton Manning Children’s Hospital.

Sign-ups to ride the teeter-totter were available via a Google form which allowed up to six participants per 30-minute time slot. Following this logic, it was perfectly acceptable to have three people on each side, regardless of whether or not the participants lived together. Cohen declined to comment.

However, Kastelitz’s clip, which was under five seconds in length, was not acceptable by PHA.

“It’s just kind of frustrating,” Kastelitz said. “[Lambda] can have an entire event where you can’t social distance when you have three people sitting back to back on a teeter-totter, and then sororities, I feel like we’re held to — not a higher standard, but a stricter standard in terms of COVID guidelines for sure, especially in the lip-sync videos.”

This is just one example of many that serves to highlight the blatant sexism that is so deeply rooted into Greek life, both here on Butler University’s campus and on a national level. This problem didn’t start with COVID, though — the pandemic only served to highlight pre-existing inequalities within the Greek life system.

As srats scrambled in the fall semester to coordinate an entirely-online recruitment –– without the help of PHA –– fraternities got a pass. I was absolutely livid when I found out that fraternities would be able to host in-person recruitment events, knowing that I would be glued to my desk staring at a Zoom screen for three days straight.

To be fair, the respective processes for fraternity and sorority recruitment are not at all the same, as sorority recruitment is far more coordinated and involves an inordinate amount of people in one space. Still, all I could think was, “How on earth could a fraternity house ever manage to efficiently mitigate the spread of COVID-19 when they can’t even seem to use a trash can or  mop the sticky, days-old Natural Light spills off of the floor?”

Butler PHA president Allison Welz, a junior biology and religion major, said in an email that the National Panhellenic Conference made the decision to hold all recruitment and recruitment-related events virtually across the country.

“This was a decision made with the health and safety of [National Panhellenic Conference] members in mind,” Welz said.

While it was disappointing, I understand that holding recruitment virtually was the safest option for everyone involved. What I don’t understand is why there was no national policy enforced upon fraternities, or why the university did not intervene to make the respective processes equal and fair.

Muchnicki said that fraternities were approved to conduct in-person recruitment following the submission and approval of a proposal drafted by IFC.

“The IFC recruitment proposal was sent to Dr. Ross and reviewed by him and the office of Fraternity and Sorority Life to ensure we had a good plan and were following all regulations,” Muchnicki said in an email. “The Dean of Students Office also provided feedback and reviewed the plan.”

While double standards abound in the Greek community, never before has there been such a blatant example. What kind of precedent does it set for sororities to bear the burden of upholding the safety of their respective houses and panhellenic community while watching fraternities mingle with potential new members just several hundred feet down the road?

There is no doubt that being in a fraternity grants members more freedom than being in a sorority does. While fraternity members who don’t live in a dry house are able to crack open a cold one with the boys in the comfort of their basement or backyard, sorority members face harsh punishment for being caught with alcohol in the house. I would know — I was forced to wake up at six in the morning to set up for Alpha Phi initiation after our risk manager found an empty bottle of Pink Whitney at the bottom of my laundry basket.

Sorority rules prohibiting alcohol in the house are not enforced by Butler administrators or the PHA; all Greek houses are overseen by their own house boards. Instead, houses’ respective policies enforce drinking rules. These policies mandate the house’s insurance be voided if bottles of alcohol are found in the house.

To me, this raises even more questions: Why is the idea of women drinking alcohol problematic enough to void an entire insurance policy? Why aren’t fraternities subjected to these policies when in all reality, they are more likely to pose as a liability than sororities are?

I won’t claim to be an insurance expert. However, I will claim that by allowing fraternities to host social events where alcohol is served and not allowing sororities to do the same, a potentially dangerous power dynamic is created. If sorority members want to drink, they have to leave their house in search of fraternity or senior house parties. Frausto said that to her, the fact that women are cornered into drinking in male-dominated spaces is appalling, as it can be unsafe.

“We’re really, in non-COVID years, sort of forced to go to these hyper masculine hetero-normative environments in order to be able to drink,” Frausto said. “It just creates a situation in which interpersonal violence is, you know, at an all-time-high.”

Honestly, I would kill to be able to drink in my sorority house with my closest friends. I can’t say that I have ever truly enjoyed myself at a fraternity party. There’s no room to breathe in a sweaty room crammed wall-to-wall with frat boys who seem to view women more as pieces of meat than as human beings. God forbid you have to go to the bathroom — I’ve never encountered one that was stocked with toilet paper. Generally, I’ll leave within the first hour to go eat a bag of Takis in my own room.

Despite these inconveniences, there’s one thing I know for sure: I did not join a sorority to sit and watch fraternity members do all the things I wish I could.

I love my sorority, and I love that I am surrounded by a community of intelligent, beautiful, empowered women. I hate that they are unfortunately still bound by pointless dress codes and behavioral restrictions.

I’m not saying that there should be no rules or restrictions – they’re there for a reason. It’s clear, though, that something needs to change. I certainly don’t know what the answer to this problem is, or if there is even an answer at all, but I know one thing: I am tired of the double-standards, and you should be, too.