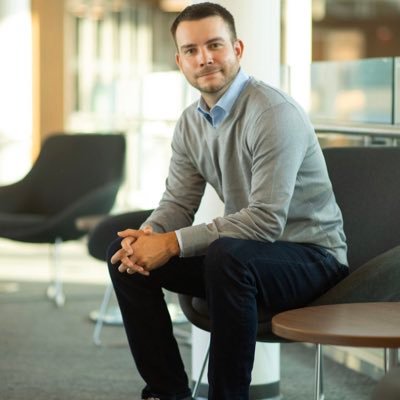 Mark Minner, the voice of Butler basketball and president and chief strategy officer at First Person, faces the unique challenge of pursuing two careers. Photo courtesy of @MarkMinner on Twitter.

The phrase echoed across social media posts from Sportscenter after Kamar Baldwin drained a last-second game-winner over Villanova on Feb. 5, 2020. The call belonged to Mark Minner, the voice of Butler basketball.

Prior to the matchup with Villanova, Minner prepped for the game like he would any other. He spent hours upon hours studying film, listening to old games he’s called on the opponent and writing pages full of game notes.

His favorite part of preparation doesn’t have anything to do with the actual game. It’s getting to know players on a personal level. Seeing a player beyond the statistics and outside of the 40 minutes in a game provides humanizing, backstage insight that distinguishes Minner’s calls from the commentary of other play-by-play analysts.

This willingness to do more than what is expected and strive to be better every night is what originally landed Minner the job. As a senior at Butler in 2012, Minner knew that he should not expect his dream job to be waiting for him right after college. Nonetheless, his efforts impressed Butler Athletics, and he was hired after graduation.

“Every game every season, I try and get better and try to be a better voice for [Butler],” Minner said. “That’s the way I’ve carried myself. Open to feedback, open to criticism, open to whatever, and trying to make sure that I continue to improve. That’s been my personal goal along the way.”

Minner began to do play-by-play while attending school at Barrington High School in Illinois, where he also played baseball. He called a multitude of sports, ranging from basketball to football to golf. As soon as he enrolled at Butler as a first-year media arts major, Minner took advantage of the relationships and student experiences the university had to offer.

He quickly became familiar with the people at Butler Athletics. Brandon Gaudin — who was the play-by-play analyst for Butler men’s basketball at the time and currently works for FOX Sports, the Big Ten Network and as the Madden announcer for EA Sports — became a mentor for Minner. He remained a source of wisdom even after Minner succeeded Gaudin.

Joe Gentry, who at the time was the radio voice of Butler basketball, also mentored Minner. Gentry, who is now the director of sales for Butler Athletics, remembers how versatile Minner was early in his college career.

“Mark was very mature early on,” Gentry said. “He was very organized and willing to do things he had not done before and wasn’t afraid of a sport he hadn’t done, as a student or any kind of role.”

Those roles included working as a sideline reporter or an analyst for volleyball, football, soccer, golf, baseball, and of course, basketball.

“I enjoy the variety,” Minner said. “It’s fun to be able to do different sports, doing one sport one season and the next season doing another sport. It keeps me balanced.”

As Minner entered his junior year, he added marketing as his second major. This would be tough to balance, but it would end up being one of the best decisions he ever made. Minner took on the challenge like he would any other: with a resolute mindset that wouldn’t allow failure be an option.

One of Minner’s professors in the College of Communication, Scott Bridge, remembers how much time and effort Minner put into both majors, while still making time for his commitments outside the classroom.

“It darn near killed him,” Bridge said. “He was taking a lot of hours, and he was still staying very involved in sports broadcasting so that that wasn’t going away. And keep in mind, he was a leader in his fraternity house, Phi Delta Theta, also. He’s amazing…he puts in the time. And his peers recognize that.”

Not only do his peers recognize the work that Minner puts into his craft, but so do his bosses and professionals outside of the sportscaster field. In 2019, Minner was named one of the Indianapolis Business Journal’s “40 under 40” young professionals. The nomination encapsulates both the work he does at Hinkle along with his position at First Person, a benefits and compensation advisory firm in Indianapolis.

Minner was offered the job at First Person during his senior year, when he met CEO Bryan Brenner at a Butler business event. Like his Butler broadcasting career, Minner has quickly climbed the ladder in this sector, becoming the president and chief strategy officer. He enjoys the work environment because of the support they give him to pursue both of his careers.

“I’m just really appreciative that I work at a company like First Person where they allow me the opportunity to try and do both,” Minner said. “And I work really hard to try and make sure that I’m being a good ambassador for both Butler and the company. Any recognition or reward that comes along with it is really just a byproduct of being around a great team at the company.”

Minner understands that for most people, opportunities aren’t going to arise as they did for him. Part of that may be a little bit of luck and good timing. But the vast majority of the opportunities he was given came as a result of hard work and knowing how to make every moment count.