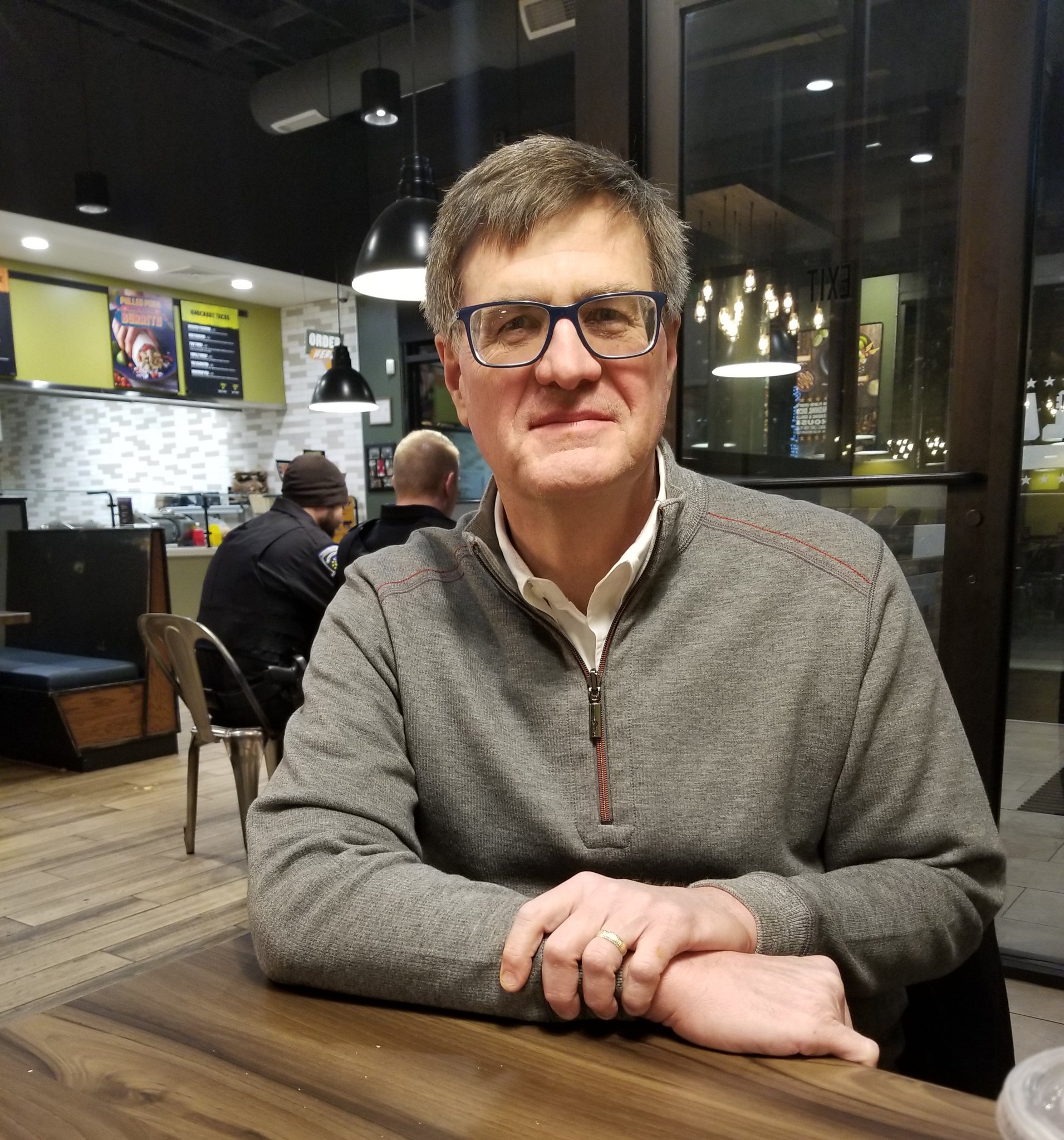 Dave Peach has been Butler’s public address announcer for the better part of three decades. He chronicles his journey from 14-year-old watching Larry Bird to working his dream job. Photo courtesy of @DavePeach101.

Dave Peach’s call chimes through a roaring Hinkle Fieldhouse after Butler’s star freshman guard buried his fourth 3-pointer en route to the Bulldogs’ upset win over No. 8 Villanova on Feb. 28.

This moment — and several more similar to it — have become a regular experience for thousands of Butler fans who have witnessed a game at Hinkle Fieldhouse over the majority of the last three decades.

Peach, Butler’s public address announcer for men’s basketball, has become an integral part of that gameday experience so many have enjoyed at Hinkle. For Peach, Butler has been in his sights since the beginning.

A 14-year-old Peach sat in Hinkle to watch then-sophomore Larry Bird take on Butler as his sister, a student at the time, performed in the Butler marching band. Although the Bulldogs lost to the Sycamores, Peach’s love for Butler basketball was born.

Once he became a student, Peach got involved with 104.5 WAJC, Butler’s student-led radio station, where announcers would travel with the team and be the radio voice of Butler basketball.

The experience at Hinkle Fieldhouse was just a little bit different in those days.

Peach always had an affinity for the art of calling a sports game. Even when he was a kid, Peach recalls being more interested in the sportscasters than the players themselves, admiring the likes of Jim McKay, Pat Summerall and Dick Enberg.

Linking a passion for sports with broadcasting, Peach found his niche.

After working in PA for Butler for over a decade, Peach made a slight detour, taking up a job as the general manager of a radio station in Virginia, where he spent three years.

At that time, in the mid-2000s, Butler men’s basketball was beginning to transform as a program, making the NCAA Tournament in 2007 under Todd Lickliter and promoting then-assistant Brad Stevens to head coach before the 2007-08 season.

Joe Gentry, current director of sales for Butler Athletics and former radio voice of the Bulldogs, recalls that it didn’t take long before Butler came calling to an old friend to get back behind the PA mic as well.

“I remember calling him and saying, ‘Hey Dave, we want you to be the PA voice at Hinkle again for Butler men’s basketball,’” Gentry said. “[Peach] said, ‘You’re not kidding me, are you?’ and I said ‘No, Dave, I wouldn’t kid you about that.’”

Peach accepted the offer and returned as public address announcer for Butler men’s basketball as the program and school were on the precipice of new heights and a new era.

In spring 2008, Peach’s first year back, the Bulldogs made the NCAA Tournament, falling in overtime in the second round to Tennessee. While it was a wildly successful campaign for the Bulldogs, all five senior captains were graduating, leaving big shoes to fill.

With high roster turnover, Peach entered the next year’s first exhibition game with hopes of an appearance in the NIT.

“[I remember thinking] ‘Well, we’ll start Matt Howard, of course, and then we’ve got this freshman Gordon Hayward, and then we got a freshman Ronald Nored and a freshman Shelvin Mack,’” Peach said. “I go, ‘Oh boy, these freshmen, we’ll see what they can do.’”

“When that ball was tipped, I said, ‘Okay, this was not an exhibition game.’” Peach said. “They were ready to go and ready to compete. It was one of the most remarkable things I’ve ever seen.”

Peach has remained the PA voice of the Butler men’s basketball team ever since, riding the wave of the two Final Four trips, a move to the Big East conference and outlasting multiple former coaches that got big opportunities elsewhere.

In an era where just about everything about Butler basketball changed, improved or was in a new spotlight, Peach remained as the familiar voice at Hinkle Fieldhouse.

“[Peach] is synonymous with Butler basketball and that’s a great thing for us,” Gentry said.

Along with being familiar, Peach is also extremely prepared. Before every game, he does incredibly detailed research on the incoming opposing team, writing every name, number and position in his spiral notebook.

In a five-minute meeting before each game, Peach will meet with the opposing school’s Sports Information Director, to make sure each pronunciation is accurate.

Lee Dicklitch, assistant athletic director of facilities and events, praised Peach for his unfaltering reliability amongst one of the most difficult seasons to date.

“We have trust among my colleagues and myself that he’s doing a great job and all that work before he gets here,” Dicklitch said. “That’s incredibly helpful to not have to worry about that with such a crazy year with so many changes in game times and days.”

After the conclusion of the Butler basketball season, Peach and several other Butler basketball staffers were given the opportunity of a lifetime — to work the NCAA Tournament, which was hosted entirely within Indianapolis this year.

While he wishes that this opportunity didn’t have to be brought on by a once-in-a-century pandemic, Peach was pinching himself.

“Finally, I got the email that it was going to happen, and I almost cried,” Peach said. “As a college basketball announcer, how could you ever ask for a greater assignment than to have the tournament in our arena, and be able to showcase it.”

Once the games began, Peach and event staff covered 16 games over the span of four days in March, including instant classics like the opening game of the tournament between Virginia Tech and Florida and UCLA-Alabama Sweet 16 game, both of which featured a game-tying 3-pointer in the waning seconds of regulation.

The action — and subsequent chaos — gave Peach little time to reflect on how much work it actually was.

“I didn’t really have time to be tired,” Peach said.

Amidst the madness, Hinkle Fieldhouse welcomed world-renowned media members within its 93-year-old halls, as March Madness rotated teams and announcers around different venues across the city.

Peach ate up every second of it.

“It was almost like I had a dream that there were 16 NCAA Tournament games in Hinkle Fieldhouse and Jim Nantz, Kevin Harlan, Ian Eagle and Bill Raftery were there,” Peach said. “It was almost like ‘Hoosiers’ or ‘Miracle.’” It’s the closest I’ll get to some great sports moment.”

With the NCAA Tournament requiring such high quality of production, Dicklitch was proud of the fact that most of the table crew working the tournament games were Butler staffers, and Peach’s experience contributed to a world-class production.

“His background with working with radio is so helpful,” Dicklitch said. “He gets it and really understands how everything comes together to present a really high-quality show. It’s really special to have him here.”

The attention to detail is what keeps Peach going even when the basketball games themselves aren’t all that interesting.

Peach specifically remembers driving home after the game between USC and Kansas on March 22. The game tipped at 9:57 p.m., meaning Peach would be making the one-hour trek back to Crawfordsville in the wee hours of the morning.

The Trojans won by a 34-point margin, far from the most entertaining game Peach would cover while the tournament was in town.

Out of curiosity, Peach flipped on the USC postgame show. The players and coaches said: “This is the greatest moment in USC basketball history. We’ve never enjoyed a game more in our lives.”

And with that perspective, Peach charged through all 16 games, never viewing the assignment as work, because for someone somewhere, it may be their highest achievement in basketball. And for the fans, it may be their first and only visit to historic Hinkle Fieldhouse.

“To see the wonder in the eyes of the fans was incredible,” Peach said. “It was a six days I will never forget.”

As March Madness has since left the city limits, Peach looks forward to a new season with perspective and grace, knowing he is the only one in this world with this unique responsibility — and honor.

“It’s hard to put into words exactly what it means for me as an announcer to do the games,” Peach said. “Being part of the radio/TV department and knowing the history of the school before I got there and what’s happening now, it’s just a great honor to be with them and something that I really enjoy. I look forward to every game when given the opportunity.”

While those working alongside Peach reflect on what it’s like working next to someone who has had this gig for the better part of three decades, they can’t help but recognize the legacy he is leaving behind. And they hope he’s not going anywhere any time soon.