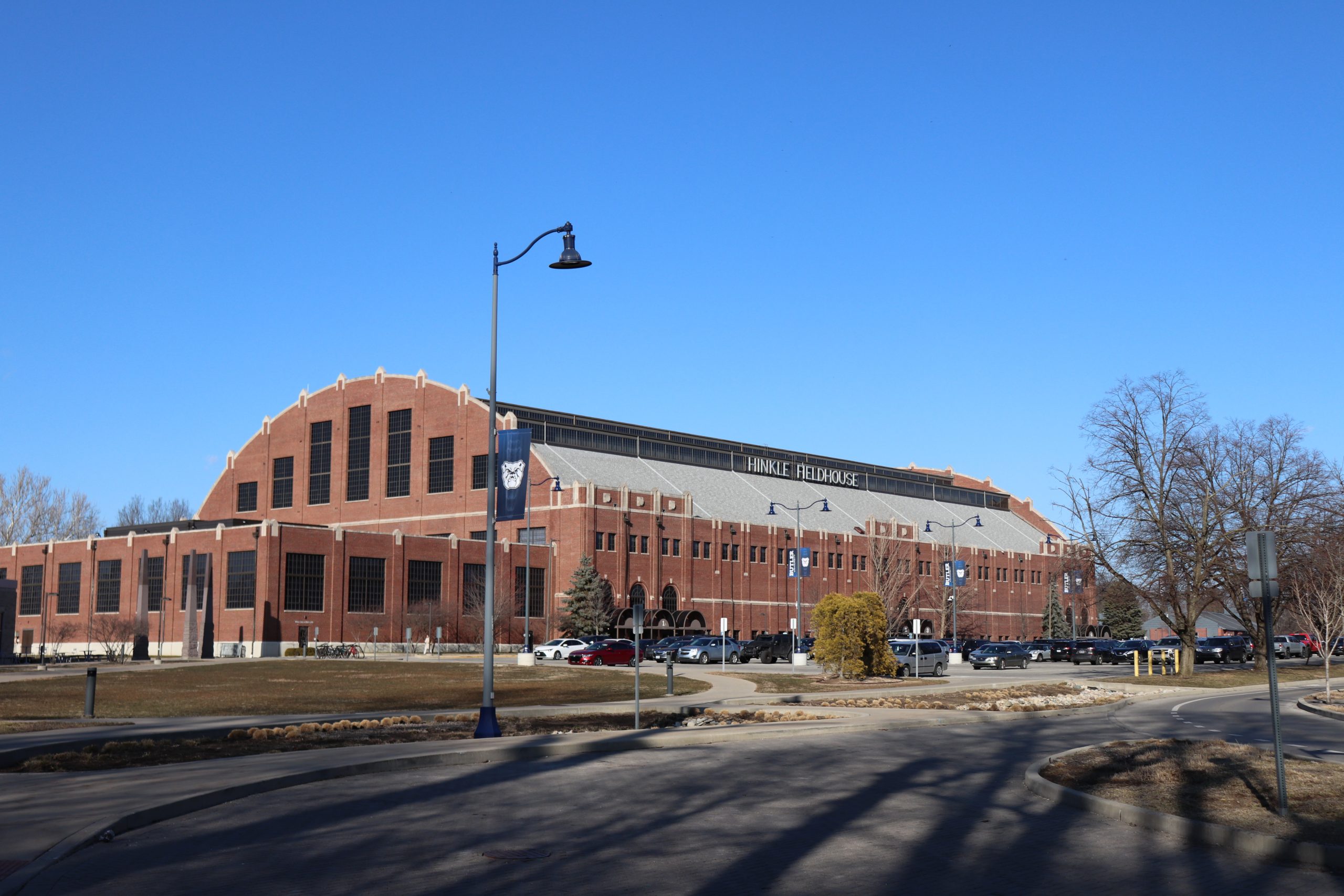 Hinkle Fieldhouse is the “front porch” of the university; so, where are the women? Photo courtesy of Collegian File photos.

When Jamie Christian committed to Butler, she was added to a GroupMe.

Soon after the acceptance letter hit her inbox, and several weeks later when the physical letter arrived in her actual mailbox, the digital communication channels between the baby Bulldogs exploded; dozens of students, eager to get to know one another, joined the chat.

Christian is now a junior English and secondary education double major, originally from Los Angeles, Calif. — a little further than a jump, hop and a skip away from Butler’s central Indiana campus. Wanting to get out of California and attend a school with a strong sports program, Christian’s mom told her about Butler and their infamous 2010 and 2011 Final Four runs.

When she applied, athletics was on her mind.

While the recent high school graduates slung around memes, hopes, fears and dreams in the GroupMe, one student in particular threw out a bone that Christian immediately grabbed: this student knew a sports photographer who could help get anyone a job at Hinkle Fieldhouse.

“I reached out to that guy and I was like, ‘Hey, like, I’m going to be a freshman, and I’d love to get involved with the [men’s basketball] program because like I love sports, and I just want to get involved, in whatever way,’” Christian said. “And he asked me ‘would you want to be an on court manager?’ and I was like ‘oh yeah like that’d be really cool.’”

After a conversation with the photographer, he secured Christian an interview with Stephanie Butcher, the administrative assistant for Butler men’s basketball. Elated, Christian went to the interview. However, what Christian first saw as an attainable opportunity was quickly squashed into Hinkle’s gleaming floors: Butcher told her that on-court managing would likely not be possible.

“She basically told me that on-court managing wasn’t an option, because she said like ‘we don’t really have girls go out there,’” Christian said.

Butcher, who could not be reached for comment in this story, cited reasons to Christian such as needing to engage in rough drills with the team, size differences between women and the men and the issue of managers needing to enter the locker room to perform various duties.

“I have written out [travel] schedules…  organized coaches receipts, …  their game schedule, … organizing all of that information… and then occasionally I’ll organize like player schedules and just make sure that they don’t have classes that are overlapping [with practice],” Siechen said.

These more menial, administrative and logistical tasks make the basketball world spin ‘round. Essentially, Butcher and her student volunteers perform the work coaches don’t have time to do, so they can focus their time on coaching.

In and of themselves, support roles are essential to any good organization. Supportive roles and active roles, however, have historically been gendered. Women support, men act.

What Christian quickly found out was that all of the staff in the men’s basketball office were women.  If that doesn’t sound like a 1950s horror film, I’m not sure what does.

Men on the court, women in the back office. Men wiping up sweat, doing drills, sitting court-side, celebrating their Senior Night alongside the team; women crafting schedules and organizing stacks of paper, sending emails. This schematic sounds familiar.

Christian didn’t necessarily mind working in the office; again, she just wanted to be a part of the program. However, her goal was to be on the court. When she brought her dilemma to the director of basketball operations, he told her she could apply to be an on-court manager — they didn’t have a rule excluding women. He even confirmed that they’d had female applicants in the past, though none had ever made it through.

“He said if my application was ‘as good as the men,’ as he put it, then he said ‘oh that it wouldn’t matter if you’re a woman,’” Christian said. “That conversation rubbed me the wrong way because [he] made it sound like that it was about me being a girl.”

Now, I’m not saying that the Butler men’s basketball program is deliberately sexist. I cannot speak to their intentions. Nor am I trying to diminish the work that on-court managers or office staff do for the program. It is hard, tenacious work that requires ample hours that mostly go unpaid.

Nor am I saying that individuals employed within men’s basketball are deliberately sexist. Christian said that head coach LaVall Jordan was the only person in the office who knew her name, and Siechen agreed that the office culture is congenial. Siechen even said that to show his appreciation for their work, Jordan has bought all of the office staff Christmas gifts in the past.

I am not saying that anyone is plotting in a back room, hoping to exclude women from the limelight in an attempt to maintain a male-dominated world. However, I don’t think good intentions, Christmas gifts and hard work precludes casual sexism.

“The problem lies in the fact that when I asked, I was discouraged from applying. It wasn’t ‘I sent in an application and got told no,’” Christian said. “It was, someone told me, ‘Oh, you know, probably not a good idea. It’s mostly men out there. I wouldn’t do that,’ which is disheartening.”

While women are discouraged from even applying for the prestigious position of on-court managers, Hinkle and Butler Athletics still have ample opportunities for women, albeit a little less glamorous.

Lindsay Martin, the director of athletic marketing and licensing, said many women are employed in paid positions and volunteer positions at Hinkle, including in ticketing, customer service, Dawg Pound Executive Board and marketing internships, among others.

“I know that we have a couple of females and a couple of males who help out in our equipment room. Obviously my marketing interns actually tend to be more females than not simply because Butler is heavily female,” Martin said. “I think department wide, you know, the opportunities are certainly there across the board, regardless of gender.”

Not only do women abound in paid and volunteer positions at Hinkle, they are also accepted into the managerial programs of other sports. After her exclusion from Butler basketball, Christian applied and was accepted into the baseball manager position. She has now successfully managed the team for going-on two years.

“Me being a girl never came up, never got in the way… no guy on the baseball team has ever made me feel uncomfortable being there [or] like I don’t know what I’m talking about,” Christian said. “I was a little bit skeptical at first after what happened with basketball, but, I mean, one day on the job, and I knew that it was much better… I could go to practices, I could be on the field. I got a jacket.”

The crux of the issue is this: no matter how many positions are open to women, if the most prestigious and visible positions are denied them because of gender, that is not equality.

It has now been over ten years since the Butler men’s basketball teams’ historic Final Four runs — seasons that established Butler on the national stage and propelled them into the Big East conference, Hinkle historian Sally Wirthwein told me.

Every mildly-educated Butler student knows that those teams put Butler basketball on the map and fundamentally changed the composition of prospective students. The result? Fancy new dorms, the Lacy School of Business 2.0 and the countless renovations — yes, Plum Market included.

“I don’t see those things happening without the enthusiasm garnered from those back-to-back runs,” Wirthwein said.

It’s not much of a stretch to say that athletics is front and center at Butler University. It draws students like Christian in from L.A., Siechen from Syracuse, New York. Hinkle Fieldhouse was quite literally the first building on campus, and has remained the center of campus to this day. Basketball is our gateway.

“Our President at the time was Bobby Fong, and he would describe athletics as the front porch to the university,” Wirthwein said. “His take was, if you can capture people’s attention or imagination with athletics, then it just allows them to come in through the front door and see what else Butler has to offer.”

It’s this very image of Butler men’s basketball at the helm of Butler’s identity that kept Christian from going to Title IX.

“A couple of my friends were like you definitely should talk to Title IX about it, but I was scared because like, obviously everyone loves the basketball program, and I do too,” Christian said. “And that’s what’s like so hard is that I really respect the program.”

Respect for the program aside, we cannot fully admire nor support a program that refuses to acknowledge the barriers to female student participation. Whether it’s a detail that has been overlooked, or a culture deliberately created, it is time for it to come to an end.

Looking to history, Wirthwein said, the key to change is reimagining the status quo.

“Rather than naming all the reasons that it can’t happen, say okay, how can we allow for this to happen?”

If Butler cares about gender equality, they will find a way to get women out on the court with the men’s basketball team. Not as tokenism, not just because — we need to take women in athletics seriously, and this begins by opening space for them. If women are to continue to occupy higher spaces in sports, they must be given opportunities on the collegiate level.

If Butler men’s basketball wants to demonstrate to its fans and its student base that it stands for gender equality, they will figure out a way to re-divide the tasks to give women equal opportunities. Not preclude them because the tasks aren’t suitable. That excuse is old.

If athletics are the front porch of the university, women ought to be sitting out there in a rocker, too.

Clarification: Butler student Erin Siechen – a source in this column – has had an exclusively positive experience working in the men’s basketball program.