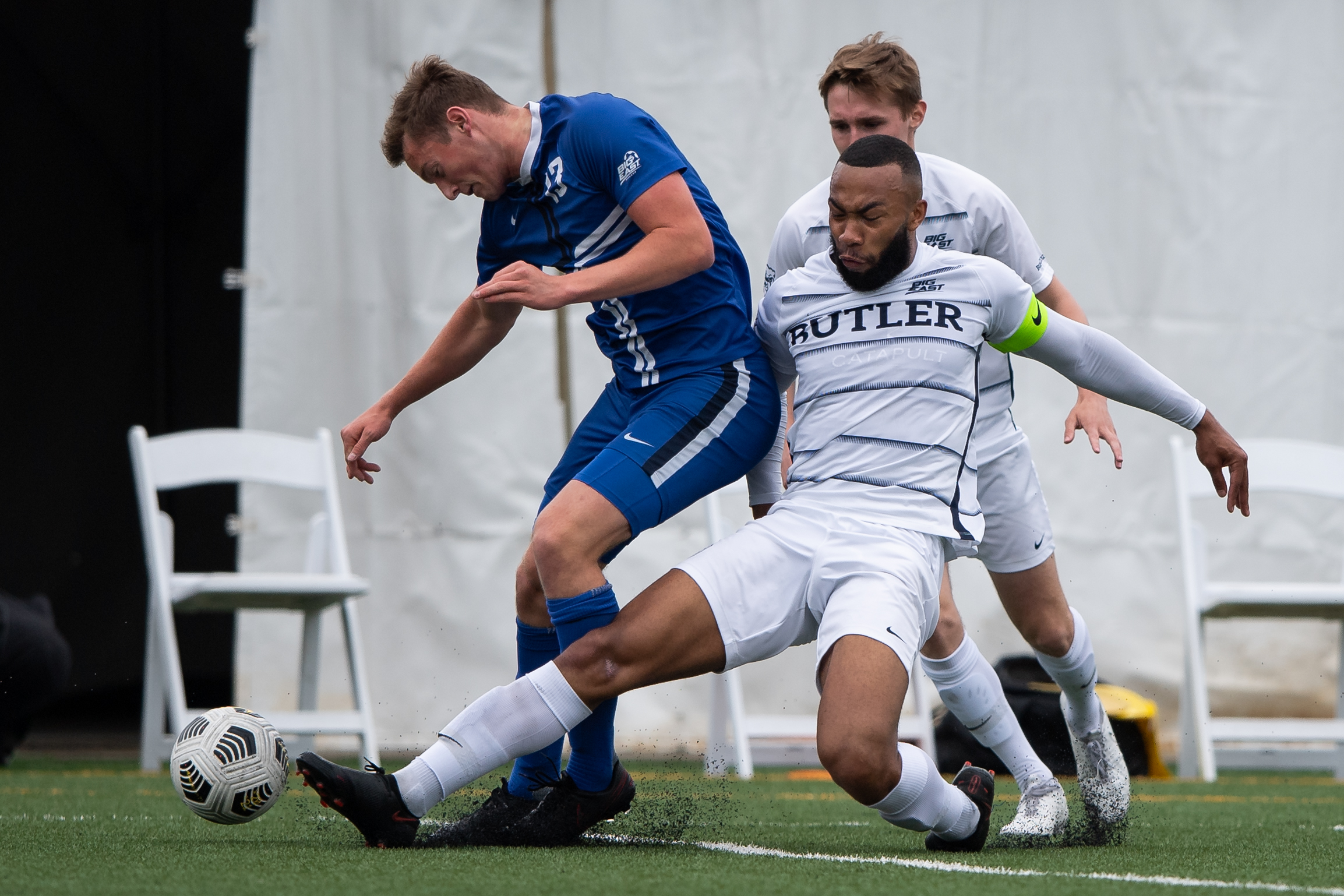 Rhys Myers makes a play on the ball in Butler’s 3-2 win over Creighton on April 10. Myers and eight others were recognized as part of Senior Day. Photo courtesy of @ButlerMSoccer.

The Bulldogs started the game fast and sharp. Butler’s midfielders sophomore Eric Hollenkamp, junior Jack Haywood and senior Joel Harvey were critical to keeping the early possession and setting up the Bulldogs with multiple opportunities.

The lone goal in the first half came from a steal in the midfield which gave sophomore Wilmer Cabrera Jr. the chance to expose the defense and find his teammate, sophomore midfielder Jack Streberger. Streberger found himself in a one-on-one opportunity with Creighton goalkeeper, freshman Nathan Schnur, and placed the ball to the left of Schnur and into the net.

Butler’s first half lead was a deserving one after they dominated much of the possession and kept a talented Creighton attack — that averages 12.4 shots per game — to only two shots.

The halftime break served to help the Bluejays more than the Bulldogs, as Creighton scored two quick goals in the first 15 minutes of the second half. This was Creighton’s seventh game of the season where they scored two or more goals, this being the first of those which ended in a loss.

The Bluejays first goal came from junior midfielder Charles Auguste who dispatched a low shot towards the bottom right corner from outside the 18-yard box. Butler’s junior goalkeeper Gabriel Gjergji was screened by his defenders and couldn’t see the shot until it was too late. Creighton’s second goal was pieced together in beautiful fashion. Senior defender Musa Qongo swung in a cross that found the head of redshirt forward Duncan McGuire who redirected the ball onto the crossbar and into the net.

Weather became more of a factor after the two Creighton goals to start the second half. A combination of the heavy rain and an urgency from the Bluejays to get back into the game led to a more scrappy affair, highlighted by the 12 fouls committed by Creighton.

Butler scored its second goal in the 74th minute as Haywood found King with a long pass behind the defense. King was able to lift the ball over the Creighton goalkeeper’s right hand and score his first goal in a Butler uniform.

The game winner was scored by Butler’s Haywood after Creighton fouled Cabrera Jr. a few yards outside the 18 yard box. Haywood was able to hit the freekick over the wall and into the top right corner.

Projected to win the Midwest Division of the Big East in the preseason poll, Butler fell short of their goal of a Big East championship this spring. With much of their core returning next season, Butler will look to bounce back in the fall.