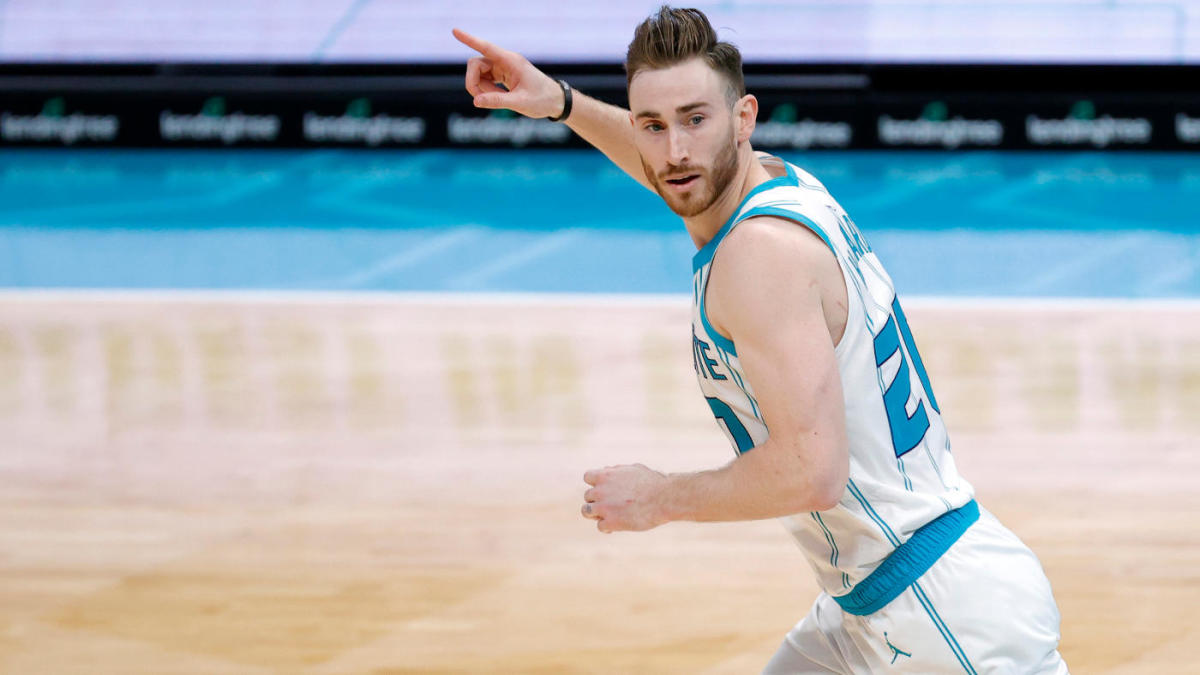 Gordon Hayward runs back on defense in a game earlier this season with the Charlotte Hornets. Hayward is averaging 21.5 points per game on 49% shooting from the field. Photo by CBS Sports.

Campbell Donovan, then a rising sophomore walk-on guard for the Butler men’s basketball team, remembers stumbling upon Gordon Hayward in the summer of 2018, a year after Hayward suffered a gruesome leg injury that caused him to miss an NBA season and undergo two surgeries. Hayward was shooting around in Hinkle Fieldhouse while Butler had an open gym in preparation for its season.

As the Butler team took the floor and Hayward wrapped up, head coach LaVall Jordan asked if Hayward wanted to say anything to the team.

A Butler fan all his life, Donovan said he was “starstruck” by the interaction.

“Wow, that’s Gordon Hayward,” Donovan remembered thinking. “I never met him, but I watched him as a kid play here. I was just thinking how much of a star he is, but also how much he’s not that many steps away from us. He was in our seats a handful of years before that. He told us to keep working hard, ‘I was in your guys’ shoes.’”

From 2008 through 2010, Hayward’s electrifying performances for the Bulldogs elevated Butler from mid-major to national status. Since then, life has come at Hayward fast. At 30 years old, Hayward is married with four kids and playing for his third NBA team, the Charlotte Hornets. Despite his astronomical rise in the NBA and it being 10 years since he last played in Hinkle, Hayward still carries the Butler Way with him — both on and off the court.

“I think some people recognize me, but I’m getting a lot older,” Hayward said. “It’s been years since that Butler team. People like to move on fast. Which is fine by me.”

Ten years ago, Hayward was the jack-of-all-trades forward leading Butler to its first-ever national championship appearance.

Those with front row seats to the “Hoosiers”-like season recall the action with vivid memory. Steven Peek, then a junior Butler student and sports editor of the Butler Collegian, remembers the campus “buzzing” after Butler knocked off Kansas State to advance to the Final Four.

“You see [Gordon] being a celebrity more after games,” Peek, the Fishers High School volleyball head coach said. “You would have to wait 45 minutes to talk with them [as a media member]. They would talk with their family and friends, and among them, Gordon would talk to a lot of people, some people he didn’t even know, people that just wanted to shake his hand. Certainly, people were flocking to that building to see a great shooter like Gordon to play basketball.”

“When I first started, I hadn’t really moved away from home, I just turned 20 years old,” Hayward said. “Butler is 15 minutes from where I grew up, so I pretty much didn’t leave home for college. So, it was the first time I was gonna be on my own. And I had a lot to learn, that’s for sure.”

Hayward also began building a family during these seven seasons. In 2014, he married Robyn and later in the year, they had their first child, Bernie. Becoming a husband and father engendered a larger sense of responsibility for Hayward. Life suddenly became more than leading a team to a championship.

“The one thing that I think honestly changed my career was becoming a father,” Hayward said. “Getting married, becoming a father, gave me more sense of purpose, helped make me way more disciplined, more committed. Because I realized that it wasn’t all about me, I was doing this for my family now.”

In 2016, Hayward was named an All-Star for the first to this point in his career, leading the Jazz to a 51-31 record before they lost in the Western Conference Semifinals. That same year, he and Robyn had their second daughter, Charlie.

As an unrestricted free agent that summer, Hayward signed a four-year $128 million contract with the Boston Celtics, citing the fact that the Celtics were a championship contender and his relationship with Brad Stevens, Butler head coach from 2007-13 and current Celtics head coach.

Then came the injury. It happened in the first regular season game, within the first six minutes. Landing awkwardly from an alley-oop, Hayward’s left leg collapsed underneath his weight, resulting in a leg-twisting injury that caused spectators, teammates and opponents to turn their heads, pray and clear their benches. The diagnosis was a fractured tibia and dislocated ankle, which he would need two surgeries to repair.

The beginning of recovery saw Hayward sink into a dark place.

Unaware of their dad’s predicament, Hayward’s two daughters, Bernie and Charlie, three and two years old at the time, colored all over his cast with multi-colored crayons. Being a father acted as a healing agent to the fresh wounds of Hayward’s injury.

“That was refreshing,” Hayward said. “It removed me from what was going on. “When you have little kids, they don’t care whether you scored 50 points or whether you scored zero points, you know? They’re happy that you’re home. And that’s good for your mental health. It allows you to get away, and allows you to realize there’s bigger things than basketball.”

After his injury, he returned the next year a shell of himself, posting career-low numbers in the regular season and playoffs. His return to form coincided with the rise of Boston’s two young stars, Jayson Tatum and Jaylen Brown, eating into his minutes at the wing position.

Off the court, the lone bright-side during his Boston years, was having his third daughter, Nora.

So, in the offseason, Hayward spurned Boston, signing a four-year $120 million contract with the Charlotte Hornets, making him one of three players, alongside future Hall-of-Famers Kevin Durant and LeBron James, to sign multiple $120 million contracts in their careers. Charlotte offered Hayward a “fresh start.”

“It was a difficult decision to leave Brad, Boston, and I think everyone who was involved was disappointed in how it worked out and how everything ended,” Hayward said. “Certainly, I think injuries had a lot to play in those outcomes.”

“[Nored] was instrumental in the whole thing,” Hayward said. “I think first and foremost because we had a prior relationship. I talked to him first as a friend. Just for advice on what he thought I should do. ‘I’m kind of at a crossroads in my basketball career,’ Hayward told Nored. “After that, I was able to talk to him as a Charlotte Hornets’ assistant basketball coach.”

Hayward relishes the fact that his Butler ties have weaved themselves into his decision-making process in the NBA.

It didn’t hurt, of course, that Michael Jordan, owner of the Charlotte Hornets, made the offer to Hayward.

“It was surreal, man,” Hayward said. “I think we all grew up idolizing MJ — being with him, hearing him talk to me, him believing in me. It’s really cool to be able to say he’s your boss.”

In 31 games with Charlotte, Hayward has averaged 21.5 points, 5.4 rebounds and 3.9 assists, leading the Hornets, who are a seventh seed in the Eastern Conference, to a surprising start.

Off the court, Hayward is trying to be a responsible father.

Before he signed with Charlotte, on Halloween, Hayward and his family went trick-or-treating with Emerson Kampen, former Butler teammate, roommate and current Butler assistant coach.

“Going trick-or-treating, seeing him interact with his kids, our kids, you put yourself back when you were 18 years old, and wonder, ‘Where did time go?’” Kampen said. “It flew and all of the sudden here we are, we’re trick-or-treating.”

While Hayward isn’t done yet, he has given some thought to his post-NBA plans. He admitted on off-days when he’s around his kids —  like last Halloween — he “sometimes” thinks about what he wants to do after the end of his career, although he was quick to add that he has “gas left in the tank.”

For Hayward, balancing the daily rigors of the NBA and that of fatherhood has been difficult. It wasn’t easy, for example, for him to miss the birth of his first son and instead play in the NBA bubble.

Whenever father time calls, Hayward thinks of coaching his kids in any sport, as his dad did for him growing up.

A few days ago, he placed his two daughters, Bernie and Charlie, five and six, into tennis lessons, along with their other favorite sports, swimming and karate.

A former two-time all-state tennis singles player, Hayward nearly quit basketball as a sophomore in high school before his mom convinced him to stick with basketball a little longer.

“I’m hopefully gonna get them into all sports, and doing all kinds of activities,” Hayward said. “I think playing multiple sports growing up is really good. Anything they’re interested in I’d push them to try it, see if they’re passionate about, and once they do, then they can focus on that.”

Above all, Hayward wants to spend quality time with his kids.

“I think there’s a lot that you learn as a parent that makes you realize your parents were doing what was best for you because they loved you so much,” Hayward said. “I think some of that you don’t necessarily learn until you become a parent.”