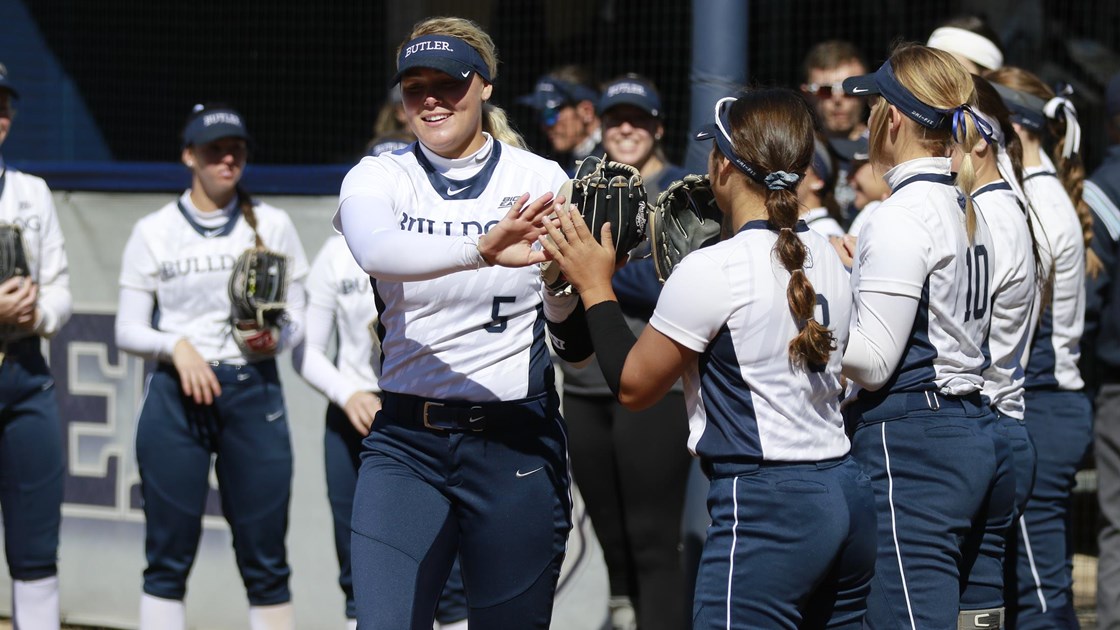 Karli Ricketts celebrates with her team in an earlier game. Ricketts was named Big East Pitcher of the Week after this weekend performance. Photo by Butlersports.com

Butler Softball moved its record to 7-7 with three wins in Chattanooga, Tenn. March 6-7. Butler defeated Green Bay and host Chattanooga twice for its second winning weekend of the season. Here’s what we learned:

1. Dominance in the circle

Butler’s pitching staff put on its best overall performance of the season this weekend, allowing just two runs over four games. Even in the lone loss of the weekend, Butler’s staff showed the capability of its pitching depth. Madison Seigworth and Mackenzie Griman combined for a single earned run in seven innings of work Sunday against Green Bay. The go-ahead run in a 2-1 win for Green Bay was unearned off an error in the fifth inning.

Consistency and depth are what made Butler’s pitching staff one of the best in the Big East conference during last year’s shortened season and we saw another glimpse of that this weekend.

Ricketts was dominant in the circle and at the plate in the weekend finale against Chattanooga. In the circle, she led Butler with a complete-game shutout and nine strikeouts. At the plate, she accounted for four of Butler’s five runs, including a 3-run home run in the third inning. For the weekend, Ricketts hit .307 in 13 at-bats, well above her season average of .250 heading into the weekend. Overall, she had four hits and 6 RBI for Butler to go with her stellar pitching performances.

This afternoon Ricketts was named the Big East pitcher of the week for the third time in her career.

Looking ahead, Ricketts enters Big East play for the first time since her freshman season. A lot has changed since 2019, but it’s worth noting that she struggled to find footing when the level of pitching went up over the course of the conference season. A big opportunity awaits Ricketts to prove herself as an elite two-way player in the Big East.

Butler opens its 2021 Big East slate next weekend at Seton Hall. The Bulldogs are one of the few teams in the conference who have played anywhere near a full non-conference slate, which should give Butler an advantage. Teams like St. John’s, who has played just three games this season, and Georgetown, who will open its schedule with Big East play this weekend, may take longer into conference play to find a rhythm. Butler has already had time to find a bit of its 2021 identity.

With the cancellation of the 2020 season, Butler was never given the opportunity to prove themselves against league competition. Butler is 22-15 against non-conference foes over the last two seasons but will need to beat Big East-level competition to get back to the NCAA Tournament for the first time since 2016. Butler remains unproven in the Big East, but their chance finally comes next weekend with the arrival of conference play.