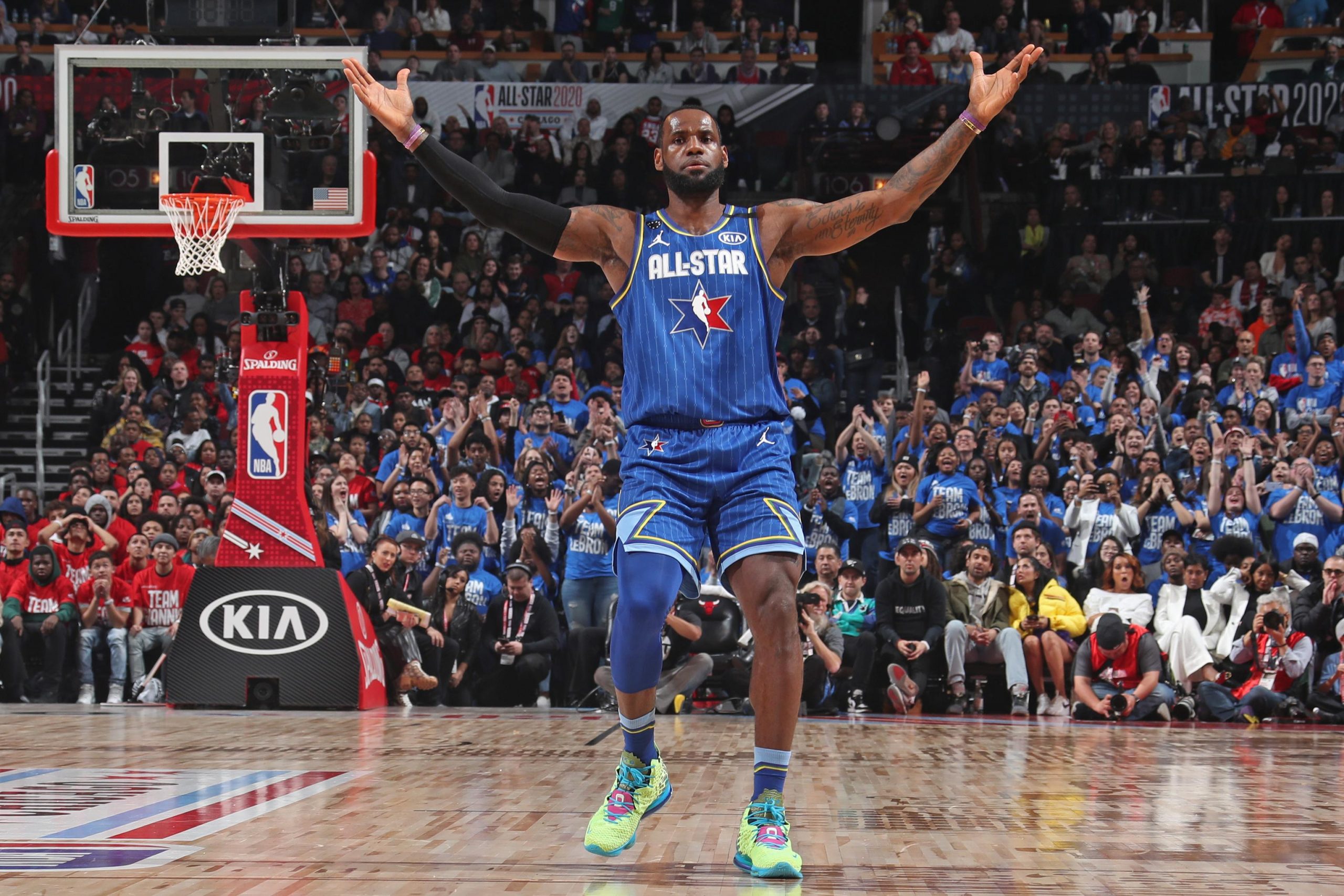 LeBron James hypes up the crowd at the NBA All-Star Game, on Feb. 16 2020. James has been against the league hosting an All-Star Game this season. Photo by Nathaniel S. Butler/Getty Images.

If you’ve watched professional sports for long enough, you know leagues respond to social movements, well, differently. One might act more progressive, another more pragmatic — with some occasional lying in the middle.

Some leagues — like the NFL — have a troubled history, exemplified when Roger Goodell embraces his annual boos from fans during the NFL Draft.

On the other hand, some leagues have had mutual respect between their organization and its players. None, however, have had a better relationship with its players than the NBA.

Under league commissioner Adam Silver, the NBA has been at the forefront of progressivism as a professional sports league.

The league has demonstrated its ability to handle current issues, being among the first professional sports leagues to postpone their season due to growing COVID-19 concerns during the beginning of the outbreak in March of 2020.

Even after professional sports leagues were shut down for months, the NBA yet again was an organizational trailblazer among the industry — by setting up a bubble to continue to play out the rest of the 2019-20 season. The bubble proved successful for the league, with zero confirmed COVID-19 cases throughout their tenure in Orlando and no games canceled due to health risks.

On top of revolutionizing professionals in the times of COVID-19, they were also able to meet the demands of today’s political issues such as social justice and racial inequality.

The players union and the NBA came to an agreement to allow players to wear messages promoting social justice on the back of their jerseys, as well as the Black Lives Matter movement with “BLM” printed on the courts.

The league continued to show its support for the social cause and its players when they postponed three playoff games following a players strike over the police shooting of Jacob Blake in August.

Following the Mickey Mouse bubble, the league prepared for a semi-return to normalcy,   planning for a full season taking place across the country. The league drafted up a plan to meet the persistent challenges of the pandemic and to prioritize the safety of teams and their players.

They also announced the cancelation of this year’s All-Star game due to the current pandemic preventing them from holding fan-focused activities surrounding the event.

After a track record of success this past year, you think it would be impossible for the NBA to do wrong by its players, right?

Well that’s just what the NBA did when it made the announcement that the league would hold an All-Star on March 7 in Atlanta — forgoing their previous plans to skip the All-Star game and give all their players a week off.

With the shortened season, TNT has taken a hit in profits with the loss of scheduled games run on its program. As part of the NBA’s $24 billion broadcasting deal, TNT does not broadcast any games past the second round of the playoffs— with those going to competing media companies ABC and ESPN.

This makes the All-Star weekend all the more important for TNT to recoup its investment.

If the NBA were to cancel the All-Star weekend entirely, it could potentially open the floodgates for a contractual dispute with TNT.

In order for the NBA to save face — and profits — the league was strongly encouraged to forgo its players wellbeing and safety, in favor of that sweet, sweet cash for the league.

This decision by the league caused a stir among its players, with many of them feeling this was not the best move for the players.

Among those players was the face of the NBA in Lakers forward LeBron James, as he expressed his disappointment in the league’s decision in a postgame interview on February 4th.

“Coming into this season… we were told that we were not having an All-Star game, so we’d have a nice little break,” James said. “Pretty much kind of a slap in the face… We’re also still dealing with a pandemic.”

James continued to go on saying that the league is “prioritizing its own health” rather than the health and safety of its players.

“We’re still dealing with everything that’s been going on, and we’re going to bring the whole league into one city that’s open?” James said. “Obviously, the pandemic has absolutely nothing to do with it at this point when it comes to that weekend.”

Celtics guard Kemba Walker seconded James, with the belief that he is acting on behalf of the other players.

“We all saw what ‘Bron said. I agree,” Walker said to reporters the following day. “He’s a smart man. He’s been around. He’s a leader. A lot of things he says are correct.”

The NBA going out and pissing off many of its superstars — including the face of the league — is a pretty obvious sign that the league is not doing right by its players.

They broke a promise to their players that they would provide a well deserved resting period for them — after all, some players only had a two-month offseason following the bubble, throwing off their usual time for recovery and preparation.

To add insult to injury, the week also provided the league and its players a built-in break in order to map out the rest of the season in case of any immediate changes due to COVID-19.

Just this past Friday, Toronto Raptors head coach Nick Nurse along with five other assistant coaches were held out of their game versus the Houston Rockets due to health protocols established by the NBA.

Although nothing serious came out of this situation — imagine if a mishap like this led to the isolation of the whole team and the cancelling of their games for the next week or two.

This would create an unruly chain of events for the league, trying to figure out how to make up the games in a safe manner with their already jam-packed schedule.

The NBA forgoing this opportunity to reassess how they will be proceeding as they head into the playoffs could really damage the league if a pandemic-related situation arises in the coming months.

As if the NBA gutting its plans to remove a preempted break wasn’t bad enough, they could also be setting themselves up for a catastrophic collapse of the league.

The All-Star game will consist of all the top talent from around the league: gathering in the same city, staying at the same location, playing on the same court — you see where I’m going with this?

The reimplementation of the All-Star weekend is incredibly stupid and abhorrently irresponsible on their NBA’s part. They are actively choosing to put their profit — or, as they say, fan enjoyment— ahead of their own players’ safety.

Although Georgia’s COVID-19 cases and hospital rates have been declining, it still remains one of the worst in the country among all statistical categories. Nevertheless, the majority of the COVID-19 data is stemming from the metro Atlanta area where the game is being held.

If there is a possible outbreak among the players during All-Star weekend, it would wreak havoc on the NBA. It would result in up to two weeks — maybe more — of games either consisting of a lack of superstars or games being postponed entirely.

Even if the games would go on as scheduled, they would drop drastically in quality and entertainment value. Not to mention that these games could affect a team’s placement come playoff time — changing what could potentially transpire in the postseason.

After all these risk factors, combined with the lack of enthusiasm shown by players, it’s absolutely mind-boggling that the NBA would go forth and continue to carry out the All-Star game.

The NBA should consider itself lucky that it’s superstars hold a high level of respect for the league’s authority and decision making, and didn’t respond to this situation with an all-out revolt — even though they would be within their means to do so.

For the sake of the league, let’s hope nothing comes about from the league’s one-off mistake in recent judgement.