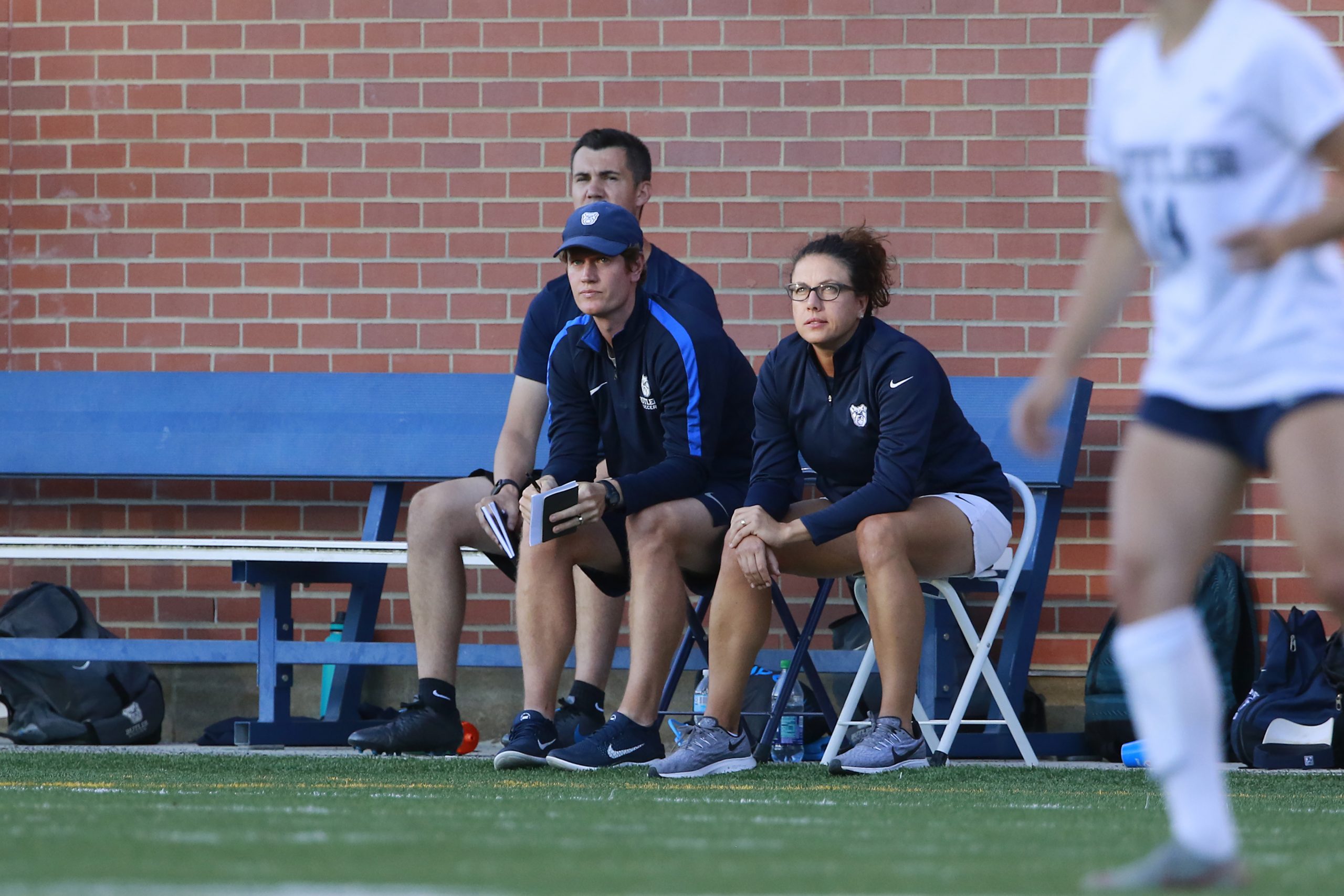 Rob Alman (left) and Tari St. John coach during a Butler women’s soccer game earlier this season. Alman and St. John operate as co-head coaches of a Division I program while being married to each other. Photo by Ivy Reynolds.

It was January 2010 and St. John was down in Tampa, Fla., at an ABCD course along with other premier collegiate soccer coaches. The course would bestow upon her an “A” coaching license. But along the way, another aspect caught her eye.

“My family always joked that I would go on these coaching courses just to find boyfriends through the series of ABCD courses, and maybe they were right,” St. John said.

Before long, St. John met the coach, Rob Alman, and peppered him with question after question.

“Just watching Rob and observing him, the only thing in my mind was ‘I wonder what this kid is doing and I wonder if he wants to get involved in the college game,’” St. John said. “It was just ‘How much money are you making, and do you want to get into the college game?’ That was literally our first conversation.”

Alman and St. John tried easing into things, taking things slow, careful not to mix career aspirations with personal relationships. That explains why, for the first year they dated, Alman was a mere volunteer assistant.

“He loved it. I don’t want to put words into his mouth, but he just really wanted to be a part of the D1 experience with all the resources available, and you get to recruit players to be a part of the team and create a culture,” St. John said. “That was something he was really intrigued by.”

Alman was promoted to co-head coach the next year. Proving to be a perfect match on and off the field, Alman and St. John tied the knot only a year later.

Although the married couple shoulder equal coaching responsibility, their roles differ slightly. St. John acts as the recruiter and the morale booster, Alman the on-field analyst.

“I always feel a little weird because he’s my husband and I’m bragging about my husband,” St. John said. “But he is a savant in that way in his knowledge of soccer and applying it effectively.”

Being married and co-head coaches, Alman said, provides the Bulldogs with an innate advantage.

“[Coaching] with someone that you know so well, and exactly what makes them tick and what makes them driven, and how much Tari is willing to give of herself for the players and how much she supports the players and getting the other end of the picture of college coaching which is when players graduate and move on,” Alman said. “To do that with someone who you are more intimate with than a regular coaching staff.”

What drew freshman Butler forward Alli Leonard to the team was the familial culture embedded in the program.

“I would say a lot of the times since Coach Tari is a woman, we’re more comfortable going to her with certain things, which I think has been helpful,” Leonard said. “Even as first-years, if we have any concerns or something that’s not related to soccer, she’s really easy to talk to. Coach Rob is very on the other side of it for soccer, I would talk to him, but I do talk to them both, honestly.”

Returning home from practice or games, the married couple brings soccer with them, whether by flicking on game film or watching soccer leisurely.

“The amount of focus and the time and energy that’s put towards the players, it’s what we want to do, and being married just provides us extra time to do those things,” Alman said. “It’s a pretty lucky position to be in in that regard.”

Although they are able to balance coaching duties and marital responsibilities, some are not able to do so.

“You know, the DePaul coach, who is also a woman, she started out I think in 2007-08 working with her spouse as well. And I remember asking, ‘hey, how come Joe doesn’t work with you anymore?’ And she was like ‘well, we were either gonna stay on the coaching staff together, or have a happy marriage, and we had to choose one.’”

Whenever the team travels on road trips, St. John can’t help but think about the future of their co-head coaching careers.

“[My husband] talks about wanting to coach into his 70s, I think of when he’s 65 and I’m 70 and we’re traveling up to Milwaukee for a five-hour bus ride, I think about those things,” St. John said. “Obviously that’s 25 years down the road, but I think I might check out a little bit before him in terms of coaching. But it won’t be for the reason that we don’t enjoy doing it together.”