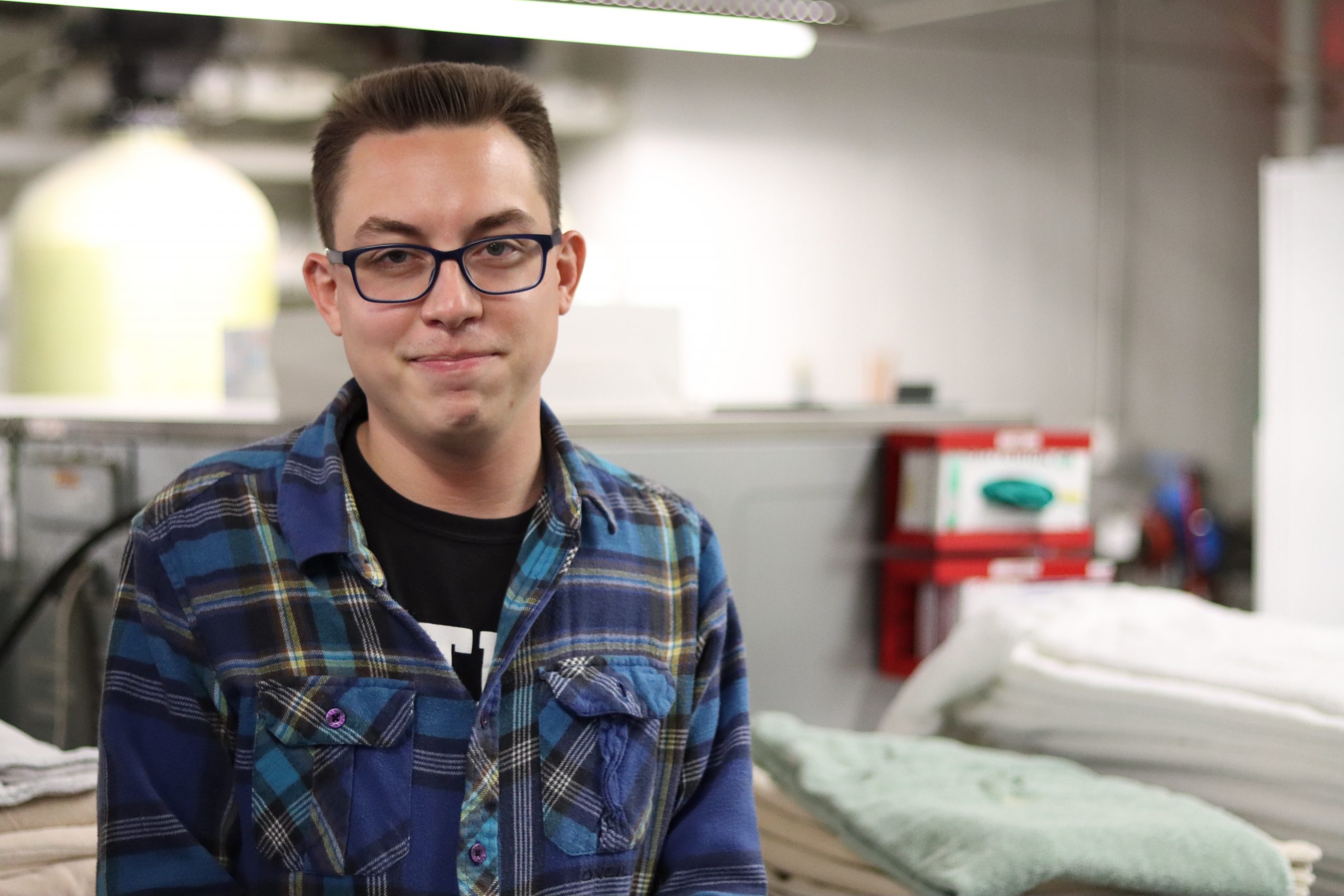 Graduate student Tyler Hughes works in the laundry room under Hinkle Fieldhouse. Hughes has done everything from cleaning jerseys to helping with gameday operations. Photo by Francie Wilson.

“We would see him working in the ticket office, we would see him helping in a lot of different areas and that impressed me,” Dicklitch said. “He’s been a rockstar during the pandemic year of us hosting events and he’s been just showing up and been able to help manage and lead a lot of or event planning on game days.”

By no means is game day a one-man show, but Hughes, a creative writing graduate student, used his job as a student equipment manager to launch into a number of roles in Hinkle. From the football sideline to courtside at basketball, Hughes may be wiping sweat off the hardwood in Hinkle, but his willingness to do the small jobs has allowed him to expand his role throughout Hinkle Fieldhouse.

“Not a lot of people can say that they have been on the court during a Butler basketball game and not play —  like that’s crazy,” Hughes said.

This season is Hughes’ third and final season as a graduate student employee at Butler. Since his start as a student equipment manager working nights washing laundry for every sport operating out of Hinkle, Hughes has become an integral part of the behind-the-scenes community in Hinkle Fieldhouse.

“He also takes a lot of pride in what he’s doing,” Ingram said. “So you know whatever he’s doing is done well, you don’t have to question or circle back; you can trust that he has thought about it, has done it and it’s already been done to a level that you would expect or higher.”

For Hughes, working in Hinkle was never a given. He did his fair share of hopping between schools and jobs before landing his job in Hinkle, attending Holy Cross, Depauw and IU Kokomo for his undergraduate degree. While on a two-year hiatus between undergrad and graduate school, Hughes had a range of jobs from tobacco prevention to guitar lessons.

“None of it was full-time work,” Hughes said. “It was a lot of part-time stuff… I mean, I didn’t see any career path in any of it.”

When Hughes arrived at Butler in 2018, he was looking for activities to help him stay focused and invested in his school work. Within his first weeks at school, Hughes joined The Butler Collegian, Booth literary magazine and became a student equipment manager for Hinkle Fieldhouse.

While Hughes’ work in Hinkle may go unnoticed by the average fan, his roles in Hinkle are an integral part of the collective work that make events in Hinkle possible.

Situated in the Hinkle basement, the cage is the office of the Hinkle equipment managers and a hub for other behind-the-scenes work in Hinkle. When Hughes works in laundry, the cage becomes his workspace. During the day a variety of trainers, athletic directors and coaches pass the cage, most of whom know Hughes’ by name or have interacted with him in the past.

Assistant equipment manager Scott McDowell said Hughes’ willingness to help outside of laundry allowed Hughes to grow into other roles in Hinkle.

“He started off like everyone,” McDowell said. “Just as laundry at night and he really raised the role and took any opportunity he could. I mean he was a ball boy for football and kind of thrown into ticketing and operations.”

As Hughes worked his way through different jobs in Hinkle, while still balancing his graduate degree and work in laundry, he made connections with athletes and coaches alike. Hughes does not view these interactions as networking opportunities, but instead has found working with others comes naturally.

Dicklitch explained how Hughes has been able to grow in his role at Hinkle Fieldhouse.

“Tyler is very versatile,” Dicklitch said. “He can wear a lot of hats, which I’ve been very impressed with.”

Hughes said one of the ways he has been able to excel is by simply showing up. In his first year washing laundry in the evenings, Hughes made an effort to pop by the cage during the day, just to check in. During this time, Hughes was able to spend more time with his bosses Jennifer Johnson, Hinkle Fieldhouse equipment manager, and McDowell. These connections and interactions allowed Johnson and McDowell to see Hughes’ interest in sports and expanding his horizons in Hinkle.

“He’s all in,” Johnson said. “He understands the importance of what we do. It’s not the most glamorous job but it’s important to our student-athletes and he understands that.”

Since starting his first job in Hinkle, Hughes has undergone personal growth. Using a list-making strategy, similar to the laundry check-list in the cage, has helped him manage his time throughout grad school. For Hughes, however, the best part of working various jobs in Hinkle are his unique experiences.

Meeting former Pacers player Dale Davis while working in ticketing and having the same backpack as former Butler player Kamar Baldwin are just some of the perks of Hughes’ jobs in Hinkle, but Hughes takes away something else as well.

“When you’re cleaning those uniforms,” Hughes said. “And then maybe you go to a game… or you could be at the game and be like ‘oh yeah I’m the one who cleaned those uniforms.’”

A self-described “lackluster” high school athlete, Hughes has found his space in the athletic world inside Hinkle Fieldhouse. It may not be the typical Cinderella story, but working in Hinkle has in a way allowed Hughes to live out his athletic dreams.

As he began focusing his time and energy in more artistic outlets, Hughes had almost given up on sports completely.

“[My other activities] gave me a lot more opportunities than sports,” Hughes said. “I put a lot of effort into [sports], researching it and reading about it and stuff and it let me down. So then, to come full circle and put the same work ethic that I applied to artistic endeavors and put that into here and now be recognized for it is pretty cool.”