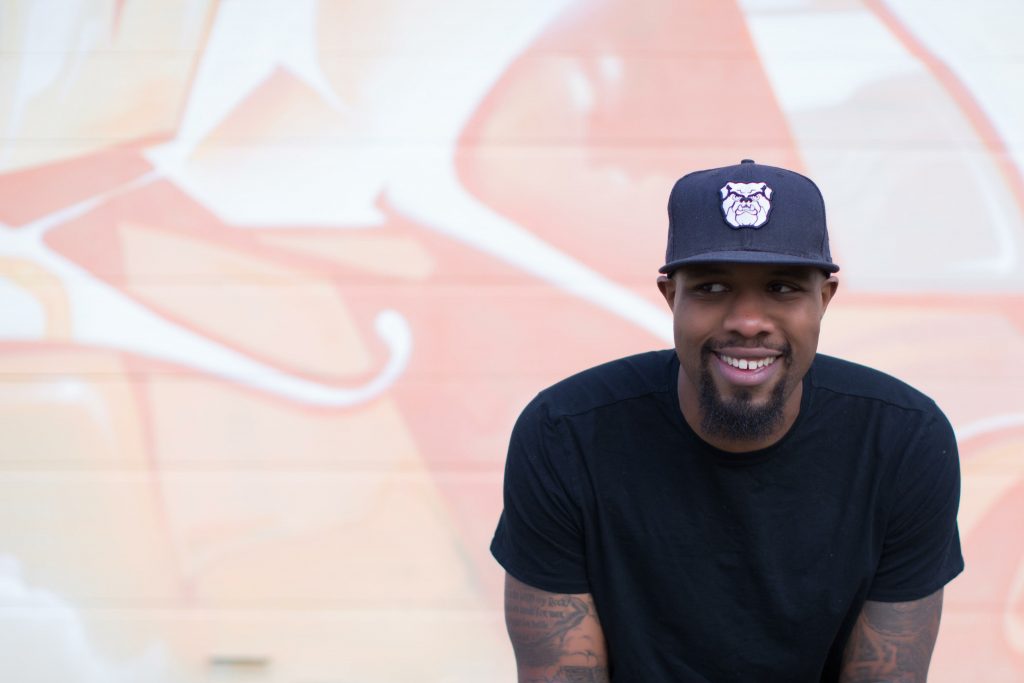 Marc Williams, more commonly known as Mr. Kinetik, is the host emcee and DJ at home Butler men’s basketball games. Williams also produces his own music and is an assistant principal. Photo courtesy of mrkinetik.com.

“I remember being in school and learning about kinetic energy in school,” Williams said. “I always thought that the concept of things always being in motion was fascinating. And when I made my rap name ‘Mr. Kinetik’, I changed the ‘c’ to a ‘k’ because I thought it looked cool.”

Williams, a 2007 Butler graduate, is mainly recognized for his role as emcee for the Butler men’s basketball games. His upbeat demeanor and innate ability to read a crowd of people make him perfect for the job.

You may have met him during the Hot Box Pizza HotShot free throw challenge, the Vision Works Move of the Game or maybe even at the concession stand after the game. It’s easy to see how much he loves his job and loves the Butler community.

His job as an emcee, however, is only one of the multiple careers that he has. Williams is also an assistant principal at Fall Creek Intermediate School, a musical artist, an event promoter and a DJ.

“Engineering is the kind of a thing where you really just have to love that super detailed, complex attention to process,” Williams said. “And I do like that, I just didn’t like it enough… it was going to be more work than I was willing to put in.”

Figuring out what he wanted to do instead wasn’t necessarily difficult, but Williams knew what he was doing came with a risk. Regardless, he was intent on discovering a major that was compatible with his talents and passions.

Williams landed on music industry studies and made the move to the College of Communication, where he only sharpened his love for music. Music entered in his life at an early age — it was in his blood. His aunt, uncle, cousin and countless other members of his family were musically-inclined in some form or fashion.

“I have an uncle that was a DJ and he used to have equipment, so when we would go see him and my cousin, he would let us get on the equipment,” Williams said. “He showed us a couple of things. And then me and my cousin are close in age, so after a while, we just both kind of jumped on and just tried to figure stuff out that we could, and I stuck with it.”

As Williams moved into his teenage years, he would go to his local youth center with his cousin and their friends, trying to see who could make the best rap on the instrumental beat from burnt CDs.

In a way, he was doing the same thing once he came to Butler, just with more professional and easy-to-access equipment at his disposal. Williams stayed in the lab every chance he got, tirelessly trying to perfect his craft. One of his professors, Cutler Armstrong, can attest to Williams’s work ethic inside and outside of the classroom.

“[Williams] was a student who took a lot of initiative, spending a lot of time in the studios by himself and with other students,” Armstrong said. “It’s kind of like music lessons or athletics: you can learn from the coach, but it’s about putting the reps in… thinking less about the craft of things and more about the art. I think he’s somebody who has done that.”

Even with all the hard work he had put in during his college career, putting it to use in a career was difficult for Williams. After graduation, Williams went through a few jobs as he searched for his passion, including a software company for automotive dealerships, a copier retail company and Sears.

“That was in a time where I was really just trying to figure out what I was going to do with my life,” Williams said.

Finally, Williams caved and began to pursue a career that he had previously told himself that he would never do: teaching. It wasn’t the kids themselves that deterred him, but the responsibility tied to them.

“I was kind of being selfish at the time,” Williams said. “I just wanted, you know, to take care of myself. I didn’t want to have to worry about really anybody at that point, especially other people’s kids.”

Freeing himself from that fear, Williams began to attend the Indianapolis Teaching Fellows Program. It wasn’t exactly “How To Be a Teacher 101,” but it did give him some tools that made transitioning into the classroom a little easier. And once he got into the classroom, Williams forgot why he was ever hesitant at all.

As a teacher, Williams added his love for music and history into his teaching approach. Now in his thirteenth year in the education field and seasoned in just about every department of a school, Williams is the assistant principal at Hamilton Southeastern’s Fall Creek Intermediate School.

“I had a complicated experience,” Williams said. “But overall, it was good. I mean, there were some challenges that I just wasn’t ready for; I was new to the profession. If you’re not an education major, there’s just certain stuff not within your course of study. So you don’t know anything about it at all. And you have no idea what you don’t know. If I could do it all over again though, I don’t think I would change anything. Everything that I’ve been able to do educationally has been helpful.”

Around the same time that Williams got his teaching career rolling, he also returned to Butler with a new role. The story behind how Williams — or as Butler basketball fans know him, Mr. Kinetik — got the gig as emcee is a simple one.

“I just asked [Butler Athletics] if I could do it and they were like, ‘Let’s have you work a women’s game first and see how it goes,'” Williams said.

He didn’t remember much of what happened that game, but he believes it must have been a good enough job to bring him back again and again. After the season ended, Butler Athletics asked if he wanted to return as the emcee for the men’s team. The previous emcee was leaving, so the open role was his for the taking.

And the rest was history.

“At this point, it has become an unlimited web of things that can be drawn back to people that I met through being the emcee; people that came to a game and then came and found me afterward, or just the simple fact that I’ve been attached to it for so long that it’s kind of its own calling card,” Williams said.

And of course, maybe the biggest perk of all is that Williams gets to be on the court for every home men’s basketball game — or in COVID-19 times, up in a prominent placement in the stands. Lindsay Martin, director of athletic marketing and licensing, works closely with Williams on gameday, close enough to where she is literally whispering in his ear — through an earpiece that is.

She also writes the scripts Williams reads during sponsored breaks and oversees any activities on the court minus the actual game itself. Their relationship, which started a few years prior to them working together, manifested itself effortlessly.

“Marc is a really outgoing guy… one of those people where you meet them and you instantly feel like you can be friends,” Martin said.

Something else that is effortless is Williams’ ability to read a crowd. Martin said Willams always knows the exact moment to play a certain song, a trait making her job a lot less stressful.

Williams’s ability to read a crowd can be attributed to his music career. Though the pandemic took away all his opportunities to do performances and DJ gigs, he still put out 11 projects last year, started a weekly radio show and created a Twitch channel for DJing.

This continual motion has become second nature for Williams. Adding on his role of being a husband and a father, he loves every one of his jobs and roles in his life. He advises anyone who has more than one passion to pursue them.

“I always try to tell people if you have a bunch of stuff you like, to try to figure out how you can do all of them,” Williams said. “You might be able to do as much with one as you would like to do, but you’ll get to do all of them in meaningful ways and you’ll be happy.”