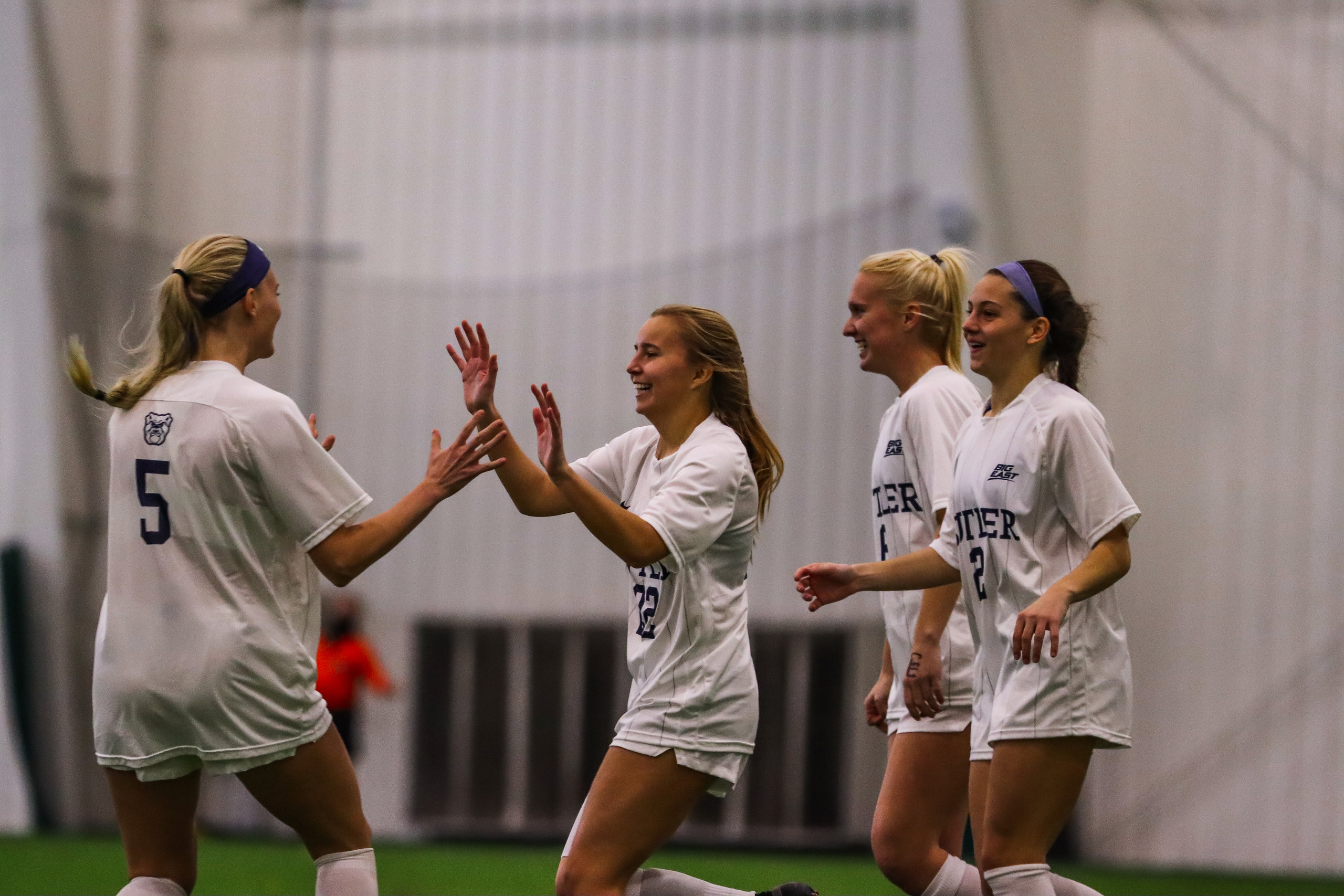 The Butler women’s soccer team celebrates after scoring a goal this season. The Bulldogs defeated DePaul, 3-1, on March 4, improving their record to 4-0 on the young season. Photo by Chandler Hart.

In their first game of conference play, the Butler women’s soccer team defeated the DePaul Blue Demons, 3-1, in the Sellick Bowl. DePaul, who finished fifth in the Big East a year ago, was predicted to finish second in the Big East Midwest Division for the 2021 season, one spot ahead of Butler.

The Bulldogs got off to a quick start with an early goal from freshman forward Alli Leonard on the first shot attempt of the game in the seventh minute. Leonard added another goal just six minutes later to put the Bulldogs up 2-0 in the 13th minute, off of an assist from junior forward Anja Savich.

Towards the end of the half, sophomore midfielder Becky Dean also found the back of the net at the end of a chaotic sequence in which Dean headed in a blocked shot from junior midfielder Katie Soderstrom right at the goal line. Dean’s goal at the 35-minute mark was the last of the first half to give Butler a commanding 3-0 lead entering halftime.

The Blue Demons only got one shot off in the first half thanks to an offensive showcase from the Bulldogs, but managed to get seven attempts in the second half. In the 75th minute, senior defender Gwen Walker got DePaul on the scoreboard by cashing in on a direct corner kick from the left side.

The Bulldogs held DePaul in check for the rest of the game and secured the victory, 3-1.

Junior goalkeeper Stephanie Rodriguez, who was selected as the Big East Preseason Goalkeeper of the Year, had another successful outing by allowing just one goal off of an impressive shot by Walker that was heavily aided by the strong wind. Thursday’s performance marks the second time this season that Rodriguez has only allowed one goal this season. She has yet to allow more than two goals in a single game through Butler’s four outings to date.

The Bulldogs return to the Sellick Bowl on Thursday, March 10, for a showdown with Marquette as they look to continue their undefeated season.