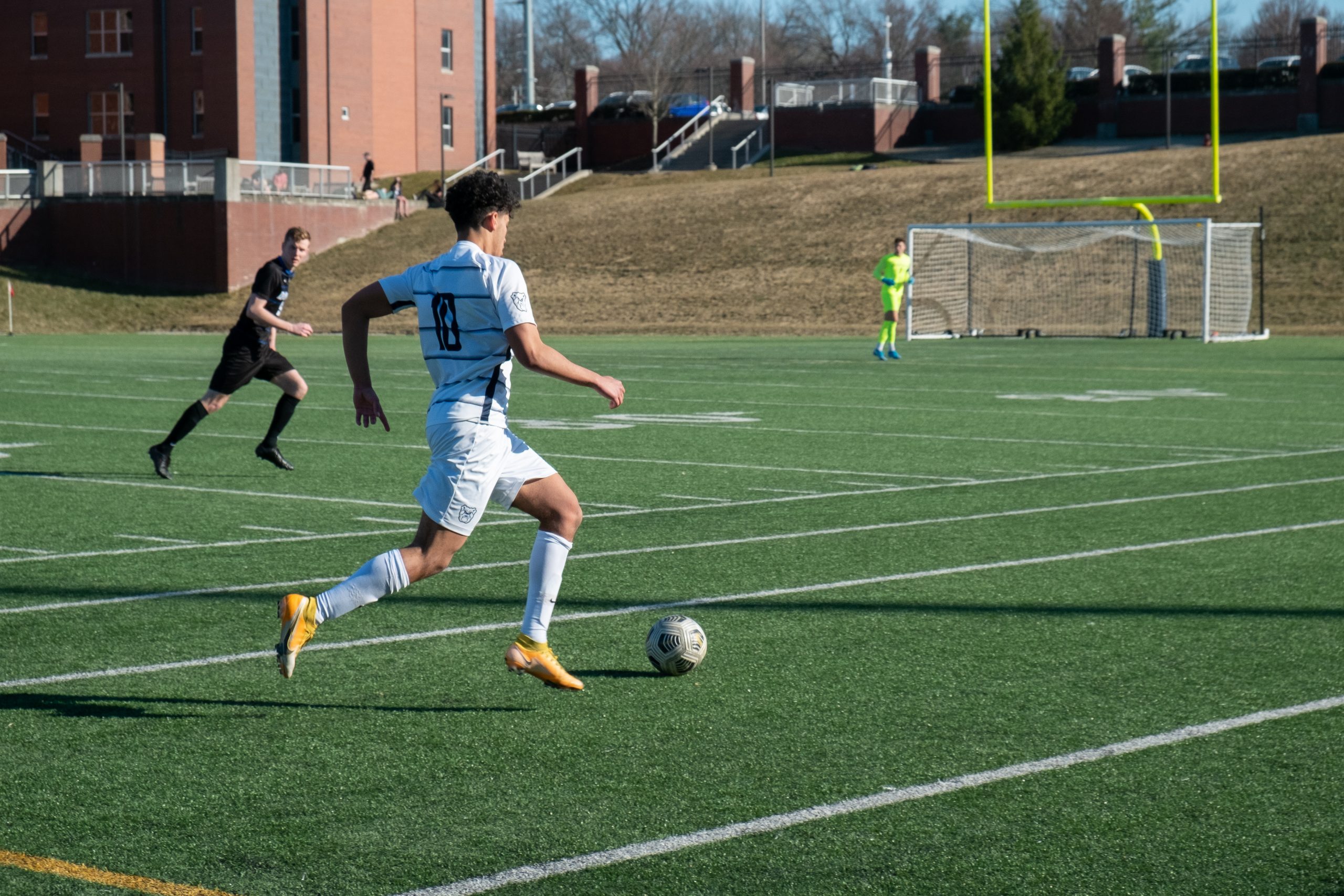 Hemi Nasser dribbles the ball down the pitch. The Bulldogs were held to a 0-0 draw with rival Xavier on March 13. Photo by Julian Cirnigliaro.

Both teams started the game aggressively and maintained the physicality throughout the contest. The chippy play resulted in multiple penalty appeals but the referee was reluctant to give anything.

In a very evenly matched contest, Xavier was the team who controlled the first half. Xavier kept the pressure on Butler as Butler was unable to get any real possession. Fortunately for the Bulldogs, Xavier wasn’t able to turn their possession into any goals. The Musketeers’ best chance came in the 23rd minute from an interception in the Butler defensive end which led to a low shot for sophomore forward Karsen Henderlong. Butler defenders sophomore Perrin Barnes and senior captain Rhys Myers were on Hunderlong’s heels but junior goalkeeper Gabriel Gjergji got down to his right to make the stop.

Slow starts have been a theme this season for the Bulldogs as Butler seems to play better in the second half. Coach Paul Snape said, postgame, that faster starts will come with experience.

“We got to remember we got a lot of guys who haven’t played a lot of minutes for us,” Snape said. “We’d like to start the game really quickly, but we’re building on it.”

Again, Butler came out of halftime with a different mindset and outplayed Xavier most of the second half. Despite Butler’s pressure, their two best chances were penalty claims. Sophomore forward Wilmer Cabrera Jr., preseason All-Big East selection, created both chances. The first came in the 57th minute as Cabrera Jr. dribbled with pace down the right flank past a Xavier defender, felt contact and went to ground. The second, in the 75th minute, was a Cabrera Jr. shot that was blocked by what seemed to be a Xavier defender’s hand.

Xavier’s second-half game plan consisted of counter attacking which actually produced the best chance of the game. In the 73rd minute, redshirt junior midfielder Justus Kauppinen struck a bouncing Xavier cross and hit the right post. A combination of Butler defenders Myers and redshirt junior Justin Savona did just enough to make Kauppinen’s look at the goal a tough one.

Coach Snape said he was proud of the team’s second half performance but acknowledged the threat Xavier posed.

“Overall I thought in the second half we were the better, more dominant team,” Snape said. “They got some good players on the counter and they had a couple shots.”

After regulation, the overtime periods produced more back and forth play with neither teams getting any clear looks. Shots finished 13-12 in favor of Xavier. Butler’s Gjergji registered his third-straight shutout while the Bulldogs have failed to score in 220 straight minutes.

Coach Snape said there is a level of disconnect between the team that is making it hard for the team to score.

“I think we’re delaying how we’re getting the ball into our attack, then what happens is they’re [forwards] not sure when to go and when to not,” Snape said. “Overall, it’s not far, we’ll keep working on it.”

Butler will look to get their forwards back on the scoresheet against Creighton on March 17 on the road in Omaha, Neb.