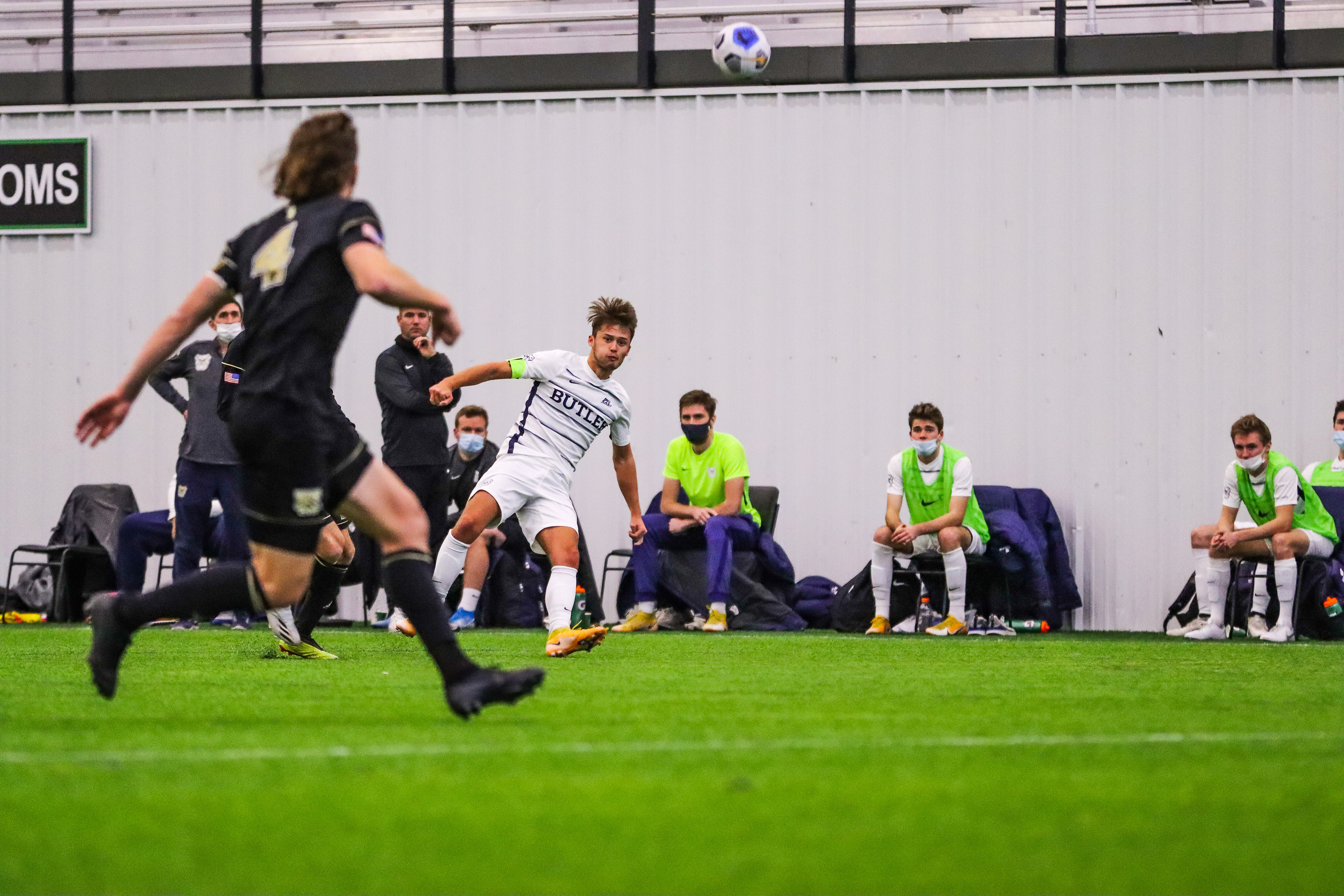 Joel Harvey sends a cross into the box in a match versus Western Michigan earlier this year. After losing 1-0 to Notre Dame on Feb. 27, the Bulldogs fall to 0-4 on the season. Photo by Chandler Hart.

The Butler men’s soccer team has continued its losing streak, starting the spring season 0-4, in another loss to Notre Dame, 1-0. However, the result didn’t necessarily tell the full story as the Bulldogs were dominant for much of the game. Butler started slow in the first half and couldn’t recover enough in the second half.

Notre Dame started the game on the front foot and controlled most of the first half. The Fighting Irish entered the game with a 5-4 record from their fall season but hadn’t yet played this spring. Notre Dame generated six shots in the first half, many of which were not clean looks at the goal.

Notre Dame freshman Matthew Radivojsa scored their one goal in the 35th minute. Radivojsa capitalized off a failed clearance from Butler’s defense, hitting the ball first time in the bottom right corner of the net. Although Butler could’ve cleared the ball more convincingly, Radivojsa left no chance for junior goalkeeper Gabriel Gjergji.

On the other side, Butler’s first half was highlighted by a great foot save from Gjergji to stop a Notre Dame breakaway in the 43rd minute. The Bulldogs couldn’t get a hold of the ball for any substantial periods. Sloppy mistakes and lack of forward movement left Butler to generate chances from defensive pressure. Although they only had one shot, junior midfielder Jack Haywood and sophomore forward Wilmer Cabera Jr. were able to convert turnovers into solid chances.

“First half we were slow, we were sloppy,” Snape said. “We weren’t doing what we thought we could so it wasn’t a great first half from us.”

In the second half, Butler looked like a completely different team. The Bulldogs midfield and forwards controlled much of the possession while defenders in sophomore Perrin Barnes and senior Rhys Myers handled the Notre Dame attack.

Butler had a couple golden chances to tie the game at one but couldn’t capitalize. In the tenth minute Butler’s Haywood swung in a cross off a corner which connected with Myers and resulted in an open look for sophomore forward Hemi Nasser just outside the six yard box. In the very next play, a steal deep in the Notre Dame half resulted in another opportunity. Nasser put a low shot on target but it was saved by the Notre Dame goalkeeper, senior Keagan McLaughlin. The rebound ricocheted straight to sophomore midfielder Jack Streberger who couldn’t connect with a bouncing ball just a few yards off the goal line.

Although the Bulldogs have had a tough start to the season coach Snape said the team is maintaining positivity and belief.

“I see real growth in this team which is really encouraging. And the boys see it, it’s not just me,” Snape said. “They really genuinely believe in this.”

Butler will begin their Big East campaign at home against DePaul on March 3.