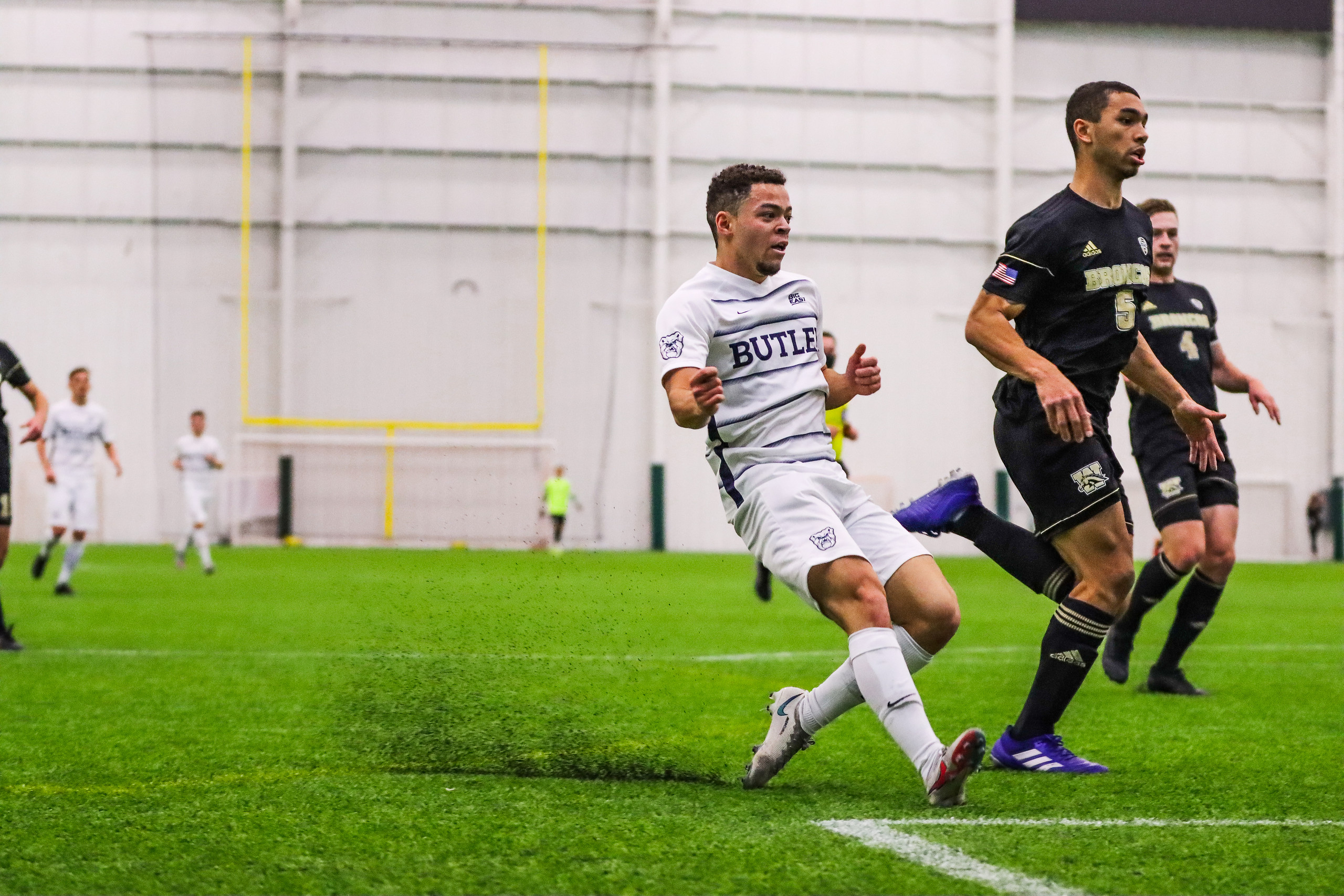 DJ Hooks fires a shot on goal in Butler’s match versus Western Michigan earlier this season. The Bulldogs earned their first win of the season over DePaul on March 3, 5-0. Photo by Chandler Hart.

In the first half, neither team could get a good grip on the game resulting in a lot of half chances for both teams. DePaul actually led in the shots category with eight while Butler had five. Although DePaul had more shots, they failed to get any clean looks at net and convert on their opportunities. On the other end, Butler took advantage of one of their chances as Cabrera Jr. directed a cut back cross from sophomore forward Hemi Nasser into the bottom right corner with his left foot.

Butler coach Paul Snape said, postgame, that the team’s start to the game wasn’t their best.

“First half we started off a little sloppy,” Snape said. “We gotta remember we’ve got some guys who haven’t played as much.”

The second half featured a Butler team who took their game up a level. The Bulldogs were quick to press DePaul in their defensive half and quickly converted Blue Demon’s turnovers into goals.

Butler’s redshirt freshman Tommy Visser caused DePaul all kinds of problems, using his pace on the left side to get around defenders and deliver crosses. Visser played a role in Butler’s second and third goals. The Bulldog’s second came off a deflected cross from Visser which dropped into the path of Cabrera Jr. who dispatched a powerful shot to beat the keeper. Cabrera Jr. returned the favor on the third, dribbling past a defender on the right side to deliver a ball across the face of the goal for Visser to finish into an open net.

Butler’s second-half highlights didn’t stop there as Cabrera Jr. scored another in the 75th minute. Receiving the pass from redshirt junior forward Ethan King, Cabrera Jr. turned a low shot into the bottom left corner. The fifth and final goal was anything but spectacular as junior midfielder Eric Hollenkamp caught the DePaul goalie, redshirt senior Drew Nuelle, out of position scoring off a 40-yard free kick.

“For Butler, this is the first game I’ve gotten more than one goal so I mean I’ve been looking forward to it and it happened today,” Cabrera Jr. said. “And it was three so it’s even better than just two.”

DePaul’s star forward and leading goal scorer Jake Fuderer was kept quiet by Butler’s defense. Senior defender and captain Rhys Myers was a force in the air, clearing any set piece opportunities away from the Butler goal. Myers’ center back partner, sophomore  defender Perrin Barnes used his pace to sniff out any runs in behind from DePaul attackers. Butler’s solid defending meant captain and junior goalkeeper Gabriel Gjergji didn’t have much to do, registering two saves.

Butler did everything they needed to in order to start to turn around the season after their 0-4 start. After only scoring one goal in the first four games and conceding seven, the Bulldogs needed to restore confidence in both their defense and their attack.

Captain Rhys Myers said it was important for his defense to get a clean sheet.

“It’s massive, it gives bits of confidence to everyone that way we can go into Marquette next weekend and dominate them and hopefully get a similar result,” Myers said.

Coach Snape acknowledged the significance of both the clean sheet and Cabrera Jr.’s first goals of the season.

Butler’s focus turns to their next Big East game against Marquette on March 10 at the Sellick Bowl.