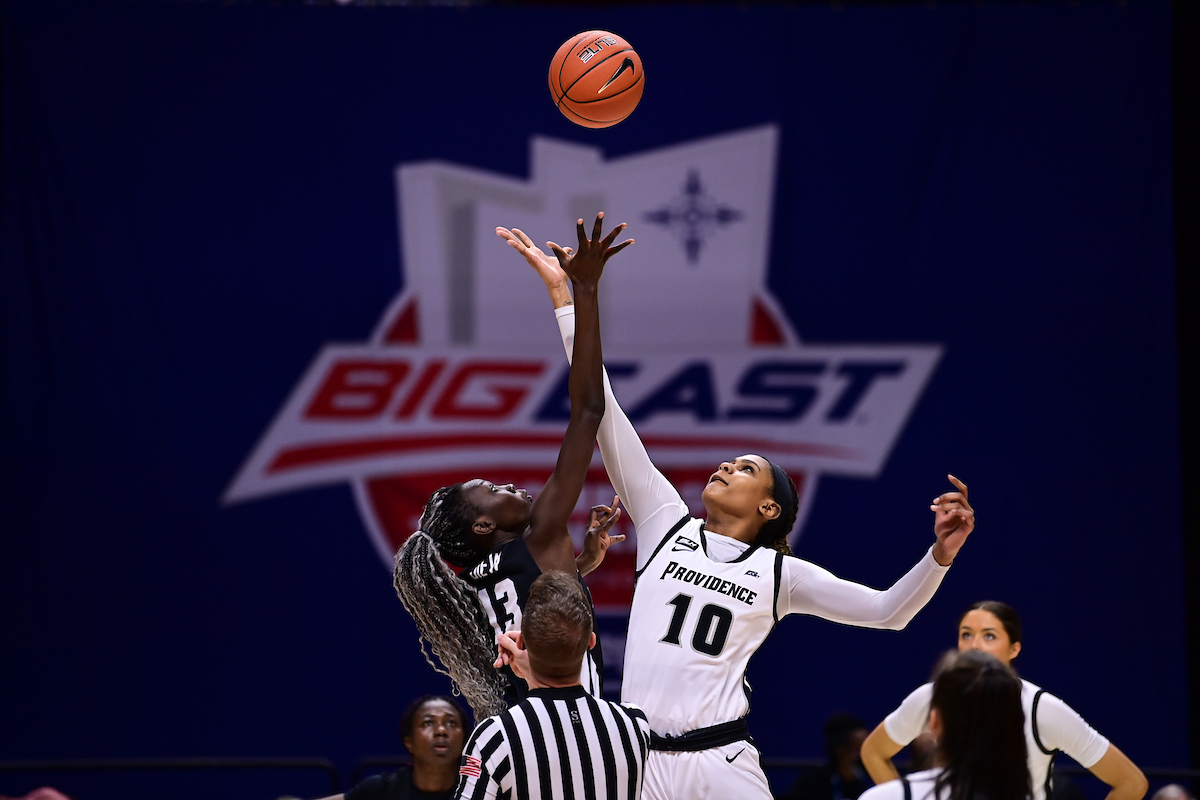 Butler’s Nyamer Diew and Providence’s Mary Baskerville go up for the tip in the First Round of the Big East Tournament on March 5. Diew finished her freshman season with nine points and four blocks in Butler 63-61 loss. Photo courtesy of @ButlerUWBB on Twitter.

The Butler women’s basketball team lost to Providence in the first round of the Big East Tournament 63-61. This marks the end of the season for the Bulldogs, who finish the season with a 3-17 record. Providence moves on to play Marquette tomorrow in the quarter finals.

The Bulldogs had a chance at the end to win the game, missing three 3-pointers in the final 30 seconds. After the game, head coach Kurt Godlevske said there was a misread on the final possession, and his goal at the end was to tie it and send the game to overtime, and there was an open option for a layup. Butler failed to score in the last two and a half minutes of the game, which turned out to be fatal for Godlevske’s side.

The game was back and forth from start to finish. Butler jumped out to an early 4-2 lead off a three from Atosu. The Friars followed with a 9-2 run over the next three minutes, hitting three easy shots inside and a 3-pointer, to take an 11-6 lead.

After a cold couple of minutes for Butler, Adika cashed in her first three of the game. Butler’s defense held Providence scoreless for three minutes straight following Adika’s three, but only mustered two points, going 50% from the free throw line.

Geary ended the drought for the Friars to restore their lead, but Emilia Sexton hit a shot from long range and Atosu scored a layup on the next possession to give Butler the lead with under a minute to play in the first. Providence hit a three just 15 seconds later, and the two teams entered the first break deadlocked at 16.

The Bulldogs started the second quarter on a tear. Just seconds into the quarter, Atosu drove to her right and hit a floating layup. A minute later, Adika hit her second three of the quarter, this one from the corner off a feed from Atosu. Two possessions later, freshman guard Tenley Dowell converted an and-one, again off a pass from Atosu. At around the six-minute mark, Parker hit a three, her only points of the half, to give Butler a 27-18 lead. Providence hit two shots from the free throw line, but failed to score a field goal through the first four minutes of the quarter.

The Friars woke up after a sloppy first four minutes, and went on a 7-0 run over the next three minutes to cut the lead to a single possession. Toward the end of the run, Atosu picked up her third foul of the game, and sat out the remainder of the half.

Adika ended the Friars run in style, converting an and-one bucket to restore the Bulldogs lead to five. A minute later, Diew blocked a Channell Williams jumper – her third block of the half – and scored a bucket on the other end to give Butler the 32-25 halftime advantage.

Baskerville’s quiet start didn’t last into the third quarter. She scored the Friars first five points in the first two minutes to cut the lead down to five. After the spurt from Baskerville, the rest of the quarter was dead even at 17 a piece. Sexton and Adika both hit threes, and both teams hit seven free throws in the quarter. The third frame ended with Butler still holding onto their lead, but it had dwindled to just a 49-47 advantage.

The fourth quarter was intense, and it was not clear at all who would win until the final buzzer sounded. Adika hit a layup to begin the quarter, but the Friars fired back quickly with a three and a Williams layup, to take their first lead since the opening quarter. Parker took the lead back on the next possession, and then went one of two from the line half a minute later. Providence guard Kyra Spiwak splashed in a three shortly after to take the lead back. Then, Adika found Diew on a nice entry pass for an easy layup. Williams took the lead right back for Providence on a jumper, to make the game 57-56 with under six to play.

Over the next three minutes, the only buckets would be a single free throw from both sides, before Diew hit a long jumper from the corner with her foot on the line. Adika made a shot from about the same spot to give the Bulldogs a three point lead with two and a half to play. However, they would not score a point the rest of the way, missing six shots.

Baskerville scored a layup with just under two minutes left to cut the lead to one, and on the Friars next possession, she grabbed her own miss and put it back up to take a 62-61 lead. After Atosu missed a layup to take the lead, Baskerville was fouled at the other end and only hit one of her free throws, which meant Butler could go for the tie with a two-pointer.

Instead, Butler took three 3-pointers – one from Atosu and two from Parker, including the one at the buzzer.Although this is a tough way to end this season, especially for a team that had been playing so well at the end of the year, the Bulldogs have much to be happy about with how the season ended. Diew and Dowell are only freshmen, and they both have proven they can be impact starters in the Big East. Adika is a star, and she is only going to get better with more time at the Division I level. Above all, this team proved they can persevere through serious adversity, and will not give up when the going gets tough which is an admirable trait for any team or person.

Once this team has a full offseason to prepare, full practice time and is back to full health, they will be back to winning ways in no time.