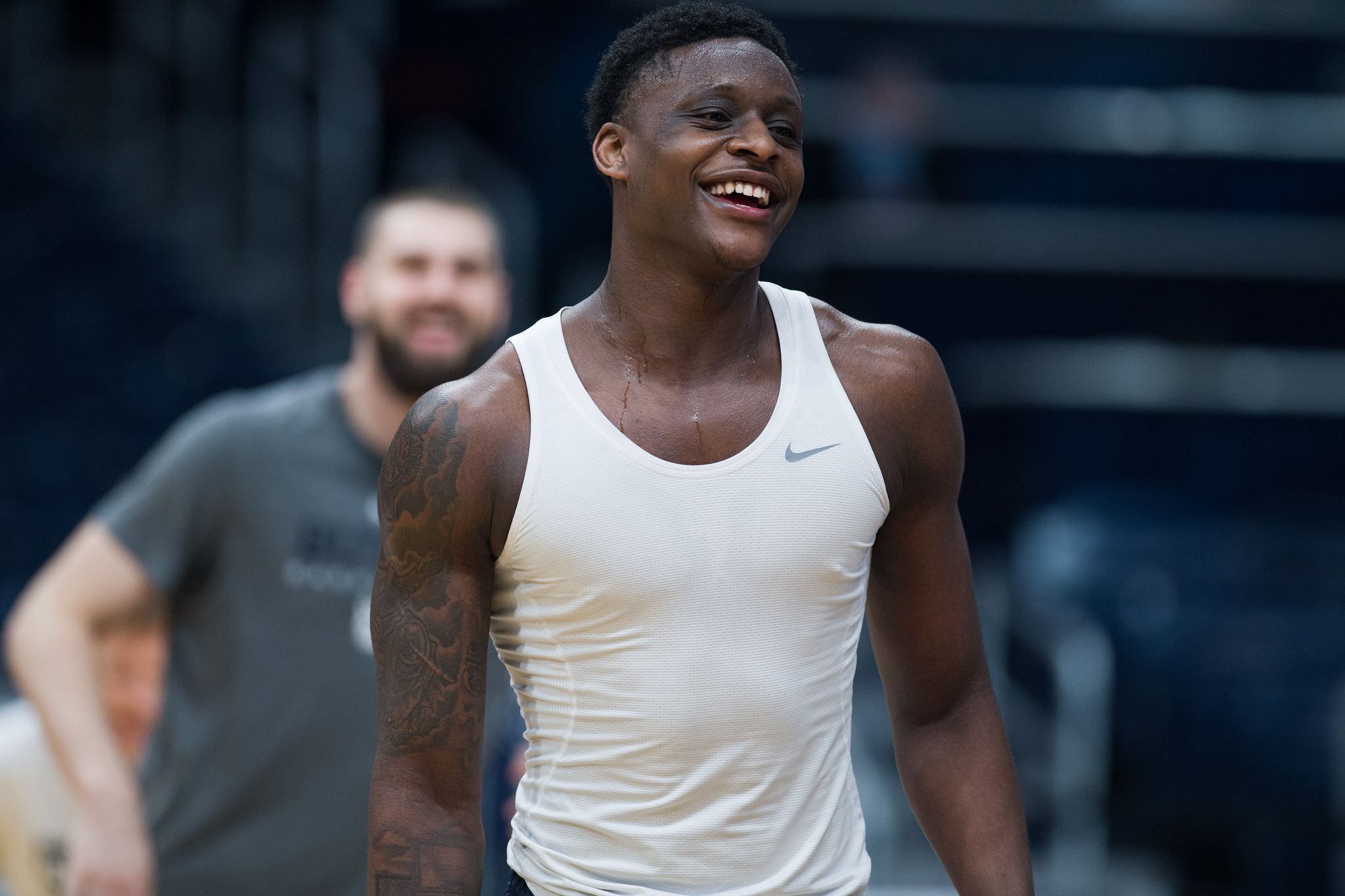 Bo Hodges warms up prior to a game this year. Hodges recorded double digits in four of his first five games in a Butler uniform. Photo by Zach Bolinger.

This Q&A has been lightly edited for clarity.

On Jun. 3, senior transfer Bo Hodges announced he would transfer to Butler for his final year of eligibility after playing at East Tennessee State University for three seasons. At ETSU, Hodges was named 2018 SoCon Freshman of the Year and was an All-SoCon First Team selection in 2020.

Due to eligibility issues, Hodges did not make his Butler debut until Jan. 30, scoring 11 points versus Xavier in his first game. Hodges bested that performance with 15 points, 12 rebounds and eight assists in the loss at Marquette on Feb. 2. The 6’5 guard currently averages 9.8 points per game on 37% shooting from the floor.

Bo Hodges: You couldn’t take visits because of COVID so everything was virtual. Basically, it was just like picking who was telling the truth over who was lying. I felt that Coach ‘Vall and the rest of the coaching staff were honest with me through the whole recruiting process and I felt that I could trust them, so that’s what made me come.

TBC: Who was your favorite basketball player growing up and why?

BH: Dwyane Wade probably because he wasn’t the main superstar but he was good, he was good at what he did. He wasn’t a shooter, but he played defense, guy was good in transition, could make mid-range jump shots if he needed to. That’s kinda like me, and so I model my game around him.

TBC: What’s the basketball game you were most nervous for?

BH: I would probably say the state championship game. I didn’t make it [to the state championship] my freshman and sophomore year. My junior year we actually won our district, but lost to a team we beat in the beginning of the season. Senior year, we got all the way there and played a team that was like 26-0 and had won state three years in a row. [Before the game] I was like ‘man, they’ve been here before.’ My brother and I were the only two kids off my team to go play college basketball after school. So it was just us and a bunch of kids who just wanted to play basketball just because they were playing in high school and they had a bunch of D-I athletes, so that probably was the most nerve-wrecking game before the game even started.

TBC: How would you describe your playing style to someone who hadn’t seen you play before?

TBC: If you were to have any magic power what would it be, and why?

BH: Reading minds. Why? Because I feel there’s a lot that goes through people’s heads. Like, if you’re having a conversation or just like someone’s just sitting there, they would never say and like you would never know. I would just like to, maybe, for one day, hear what everybody’s thinking about.

TBC: Wouldn’t that be too much information, especially if you’re just walking past someone?

BH: Only if you make eye contact with them.

TBC: Do you have one specific shot in your career that you’d say was bigger than any other and what’s the story behind that?

BH: Freshman year. I was playing varsity and we might have been down two and there was like a second left. They were shooting a one-and-one to close off the game, and this was the district championship game. And the kid who shot the ball missed it and I got it and I just heaved it from the other free throw line and it hit the glass and went in. That was maybe the biggest shot of my life.

TBC: Growing up, what were some of your favorite TV shows and movies?

BH: TV shows? I used to watch Martin and Fresh Prince of Bel-Air a lot. Cartoons, I would say Fairly Oddparents and the Proud Family. Movies? I like all the Rush Hours, Transformers, Friday’s, and…oh, Fast and Furious. I like movies where there is a series behind them, not just one movie.

TBC: Who’s your favorite actor of all time?

BH: I would say either Tom Cruise, Will Smith or Samuel L. Jackson — one of those. I like Tom Cruise because he can do his own stunts.

TBC: If there was a movie about you, would it be one of those three that plays you?

TBC: Who’s the best player that you’ve played against, whether in high school, AAU or college, and what was it like playing against them?

TBC: You played for your dad during AAU. Some people hate playing for their dad and some people love it. What was your experience like?

Butler hosts the Seton Hall Pirates at Hinkle Fieldhouse tonight. As of publication, Bo Hodges is listed as questionable for the game.