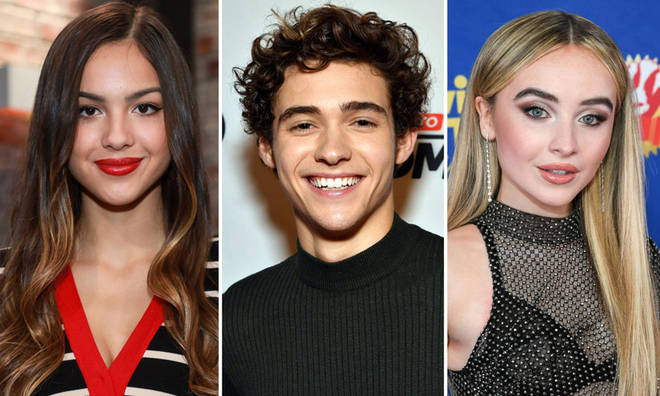 Are you on Team Olivia or Team Sabrina? Photo courtesy of CapitalFM.com

Olivia Rodrigo’s new single “Driver’s License” has topped the Billboard 100 chart for the past two weeks, but not without stirring up a bit of drama. Rodrigo, who stars in Disney’s “High School Musical: The Musical: The Series,” or “HSMTMTS,” was rumored to have written the song about co-star Joshua Bassett.

Fans of Rodrigo and Bassett began to speculate that the two were dating after the first season of “HSMTMTS” was aired, but their relationship was never confirmed. In a video of the two posted by LeBlanc Updates on YouTube, Rodrigo said she would “always remember” practicing to drive in Bassett’s car.

This video led fans to believe Rodrigo references Bassett in “Driver’s License,” as she begins with the line “I got my driver’s license last week, just like we always talked about.”

Posts made to Rodrigo’s TikTok account during August 2020 alluded to a breakup, with one being captioned “and that’s on failed relationships.” Rodrigo also sings about a breakup in “Driver’s License,” saying that she drove through the suburbs “crying ‘cause you weren’t around.”

Rodrigo suggests that Bassett has moved on with someone else with the lines “And you’re probably with that blonde girl/ Who always made me doubt/ She’s so much older than me/ She’s everything I’m insecure about.” Since Rodrigo and Bassett’s rumored breakup, Bassett had been pictured with actress Sabrina Carpenter, who appeared on the Disney show “Girl Meets World.” Notably, Carpenter has blonde hair and is four years older than Rodrigo.

Two weeks after the release of “Driver’s License,” Carpenter released “Skin,” which seemed to be a direct response to some of the lyrics in Rodrigo’s song. In the song, Carpenter sings “Maybe you didn’t mean it/ Maybe blonde was the only rhyme,” and “But you’ve been tellin’ your side/ So I’ll be tellin’ mine.”

Further fueling the drama, Bassett also took the opportunity to release his single “Lie, Lie, Lie” on Jan. 14. In the song, Bassett addresses deceptive accusations, singing “I know what you said about me/ I hope that it makes you happy/ You can’t seem to get me off your mind.”

Some Butler University students have kept up with the drama surrounding the three songs. Junior marketing major Sarika Dev said that she felt Rodrigo wrote a very vulnerable song about teenage heartbreak and Carpenter essentially used that to take advantage of her.

“I think that Sabrina’s really tacky,” Dev said. “I think that she is a 21-year-old bullying a 17-year-old over four lines in a song in which Olivia was complimenting Sabrina. Rodrigo was like ‘you’re so beautiful, and I’m insecure about it.’ Like, what? I think that’s pretty tacky, and she had no popularity after she left Disney Channel and this is her one chance to get it back.”

Carpenter posted on Instagram on Jan. 25 to thank her followers for listening to “Skin,” specifically “those who have opened their minds to lyrically what [she] was trying to get across.”

“I wasn’t bothered by a few lines in a [magnificent] song and wrote a diss track about it,” Carpenter said in the Instagram post. “I was at a tipping point in my life for countless reasons. So I was inspired to do what I usually do to cope, write something that I wish I could have told myself in the past.”

Carpenter also said that the song “isn’t calling out one single person,” but that “some lines address a specific situation, while other lines address plenty of other experiences [she has] had this past year.”

Not everyone was convinced by Carpenter’s caption, though. Shelby Mohr, a junior political science and international studies major, had a similar opinion to Dev when she first heard about the “Driver’s License” drama.

“I was definitely on Olivia’s side because I kind of felt for her,” Mohr said. “Because she’s younger, obviously Josh was a little bit older. Her song is basically just about heartbreak. Especially after Sabrina’s song came out, I feel like Sabrina took it as a personal attack, and it just was about Olivia’s heartbreak.”

Mohr said she wondered, though, if the entire situation was just one big publicity stunt.

“It just was very coincidental that all three of them released songs within the same two weeks,” Mohr said. “And then, the ‘High School Musical’ season two is about to come out. So part of me kind of thinks that it might be just marketing… it was just weird timing. I was like, how did Sabrina just write a song and come up with it like two weeks?”

Erin Degnan, a junior communication sciences and disorders major, said she also wondered the same thing, considering she didn’t feel “HSMTMTS” was originally as successful as Disney had hoped.

“I personally know a few people that, because of all the drama and the release of the song and whatever, they started watching [‘HSMTMTS’],” Degnan said. “So, I think that might have something to do with why the song was released when it was… I think there definitely is some truth to it, but I can also see it just being for publicity as well.”

Publicity stunt or not, “Driver’s License” is continuing to break records on the charts. The drama is driving up recognition for each of the artists’ singles and the upcoming season of “HSMTMTS.” The devil works hard, but Mickey Mouse works harder.