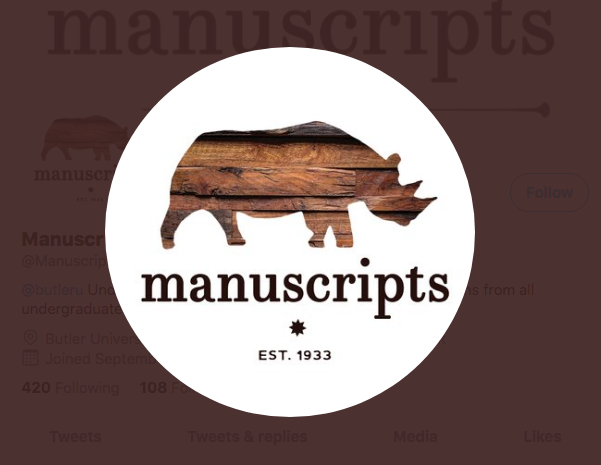 Manuscripts, Butler’s literary magazine, has been routinely publishing undergraduate work since 1933. At the time, the magazine was released quarterly and featured a slew of written work along with some woodblock prints — a method of printing text and images used in East Asia — for 15 cents. Nearly 90 years later, over one hundred issues have been printed and distributed.

Manuscripts’ editorial board accepts prose, poetry, photography and art submissions. These pieces begin to be accepted to the magazine at the beginning of the academic year. From there, the team tries to attract more submissions by posting ads on social media.

Darby Brown, a senior English, history and Spanish triple major, has been a part of Manuscripts since her first year and now serves as the magazine’s editing chair.

“Once we start getting submitted pieces, each week we all read a certain amount of pieces and then vote on them in our meetings,” Brown said. “We decide whether we want to accept or decline them. I think it’s a lot of reviewing pieces, encouraging people to submit and then looking ahead to plan [contests] right now.”

The magazine hosts several contests throughout the year to get students to participate and send in their pieces. Two of those contests are poetry and prose competitions with cash prizes for the winners. In addition to the cash prizes, the contests are normally judged by guest authors who give feedback to the students who submitted their pieces.

Lilly Hinckley, a senior English and classical studies major, is the editor-in-chief of Manuscripts. As part of her position, she is in charge of reaching out to guest judges and helping organize the ceremonies where they announce the contest winners. In addition to the contests, the group occasionally has literary festivals and open mic nights to help their members connect and learn more about the organization.

The deadline for submitting pieces is around the beginning of March so the editorial board has enough time to review, vote and edit pieces before assembling and printing the magazine. The distribution of the magazine either occurs at the end of the school year or runs into the fall of the next school year.

Miriam Berne, a junior criminology and creative writing double major, is currently the associate editor. She said that COVID-19 has affected the timeline of the magazine.

“Everything’s going to be, I feel like, a little bit sped up this semester just because it’s a shortened semester,” Berne said. “And, we want to try and have the print magazine here before graduation. So it might look a little bit different this semester.”

Along with the issues that COVID-19 has presented the magazine, the editorial board is still dealing with the same issues they normally would when it comes to creating a literary magazine from scratch every academic year, such as determining a theme. This year, the team contemplated quarantine or loneliness as possibilities for themes, but have yet to formally decide, according to Brown.

Recently, beginning in the fall of 2014, Manuscripts also started accepting submissions from any Indiana undergraduate student.

If students are interested in being featured in Manuscripts, they may submit their poetry, prose, photography or art, through the website. There is no fee to participate in the magazine and all pieces are judged anonymously by the executive team.

Manuscripts is currently hosting its prose contest, which will be judged by a guest author in the beginning of March. Students can participate by submitting their work all pieces by Feb. 24 through this link.

More information about Manuscripts can be found through their website or by emailing editor-in-chief Lilly Hinckley.