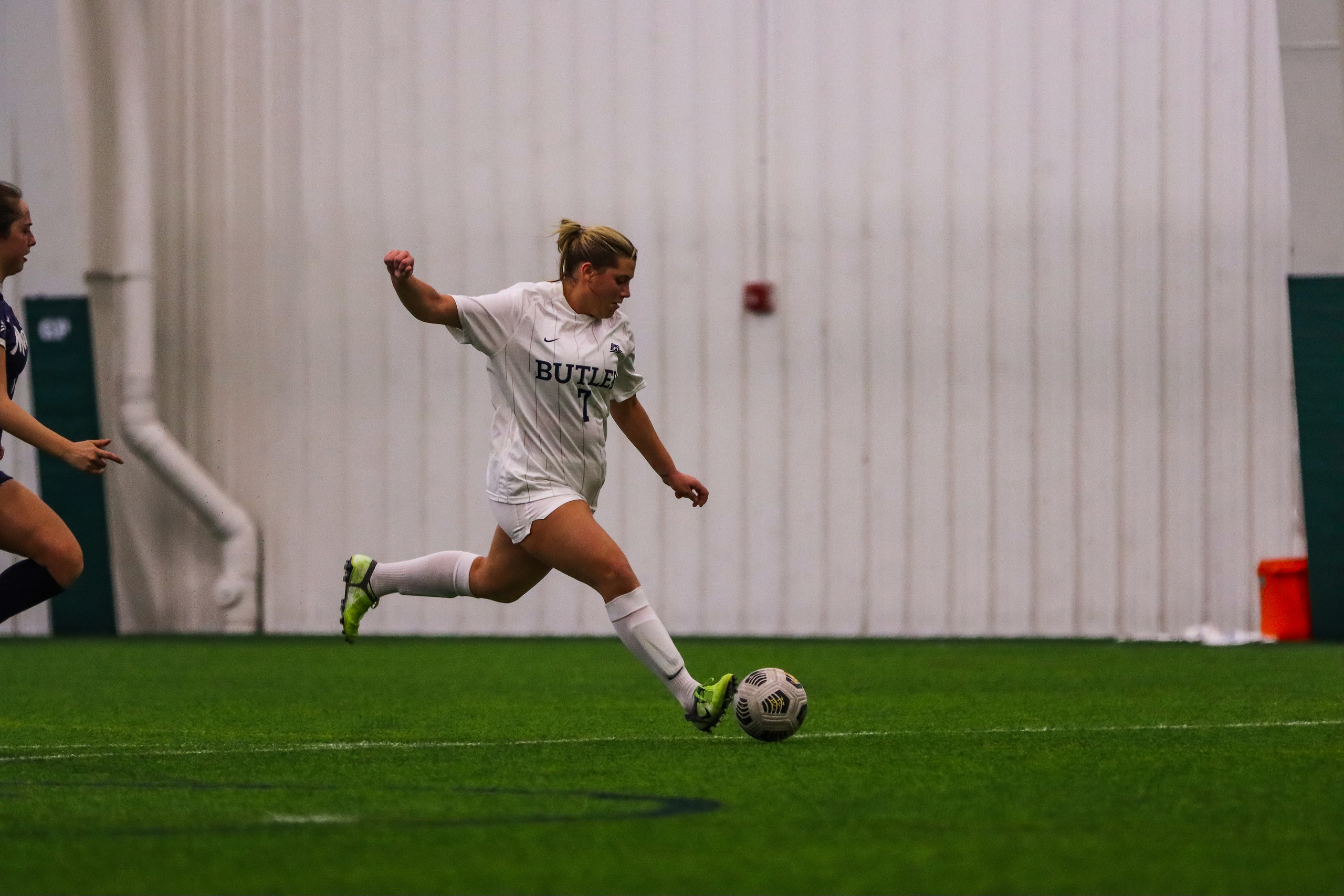 Anja Savich shoots for the goal in a match against Marian earlier this season. The Bulldogs are playing for the first time in 14 months. Photo by Chandler Hart.

Like many of Butler’s fall sports, the women’s soccer team began their season this spring for the 2020-21 academic year due to complications caused by the COVID-19 pandemic. However, that did not stop many players and coaches from setting lofty expectations to begin the year.

Co-head coaches Rob Alman and Tari St. John both believe this year’s Butler squad is capable of taking home the Big East championship and advancing deep into the NCAA Tournament.

“I think that the strength and depth in this squad is as high as we’ve ever had,” Alman said. “I think that speaks volumes as we’ve graduated many players these past few years who have gone on to play professionally.”

While this is Alman and St. John’s ninth season working together as married co-head coaches, St. John is in her 15th year overall with the Bulldogs. Despite this being the most unique season as a coach, St. John believes that the postponed season is a good thing for her players.

“Instead of freshman having to jump into games ten days into their freshman season, now they’ve gotten five or six months to acclimate on an academic level as well as athletic level,” St. John said. “And those six freshmen, I don’t even look at them as freshmen anymore. They’re just so acclimated at this point.”

As one of the first-year players on the team, Claire Farrington thinks the delay was beneficial to allow for more time to practice together before games began.

Farrington, a native of Mondanville, Australia, said she came to Butler to help the Bulldogs secure a championship and grow as player. Of all the schools she looked at, Farrington felt that the environment at Butler would help her improve most as a soccer player.

“I would say it’s definitely a competitive environment which is good, it means you can grow so much as a player,” Farrington said. “I think that to be able to grow you do have to be confident in that you’re good enough to be here. I think my confidence has definitely built thanks to that.”

Soderstrom and Savich each scored a team-high eight goals in 2019. Soderstrom added seven assists to her campaign, while Savich was second on the team with five. Rodriguez started all 19 games and recorded 63 saves. Soderstrom is the lone returning Bulldog who was a member of the All-Big East First Team, but Savich was recognized on the All-Big East Second Team and sophomore midfielder Aliya Diagne was a member of the Big East All-Freshman Team.

As one of five seniors on the roster, Leonard has opted to return to Butler in the fall of 2021, embracing the role of the experienced upperclassman and does the most she can to help incoming freshmen with acclimating to their new team.

“Every upperclassmen on the team has a different leadership role, so we all kind of bounce ideas off each other when underclassmen come to us and say they’re dealing with a problem,” Leonard said. “Just being able to give advice, whether it be soccer advice or life advice. I’ve learned from past experiences and from people who have gone before me in the soccer program and I love sharing that knowledge with others.”

Like most players on the team, Taylor Crowe, a senior midfielder from Noblesville, said she believes there is no limit for where the team can go in the 2021 spring season.

“This team is fearless,” Crowe said. “After a year like 2020, there is just nothing to hold us back anymore. This is a group of girls who are willing to go the extra mile and do the hard work and it is just such a blessing to have this opportunity.”

Crowe said she believes that after the hardships every player had to deal with in 2020, each member of the team begins the season mentally stronger than they ever have been.

“We worked so hard on being strong mentally, whether that’s during games or practice, or even outside of practice,” Crowe said. “Of course, at the end of the day, we want to get to the NCAA Tournament. But right now, we’re trying to focus on the present and just work each week to grow and improve and take that on to the next week.”

Alman, however, said she does not believe that just one championship is possible for 2021. Should the next season return to the fall, the Bulldogs would have a rare occasion of having two seasons in one calendar year.

“The silver lining of having a spring season is having the chance to do something that we’ve never had the chance to do, which is play two competitive seasons in the same calendar year,” Alman said. “The group’s got its sights set on winning championships, and that’s what we’re aiming for.”

After winning each of their first three regular season games by three goals or more, the Bulldogs return to the pitch on Friday for an exhibition match versus Bowling Green before Big East play begins next week.