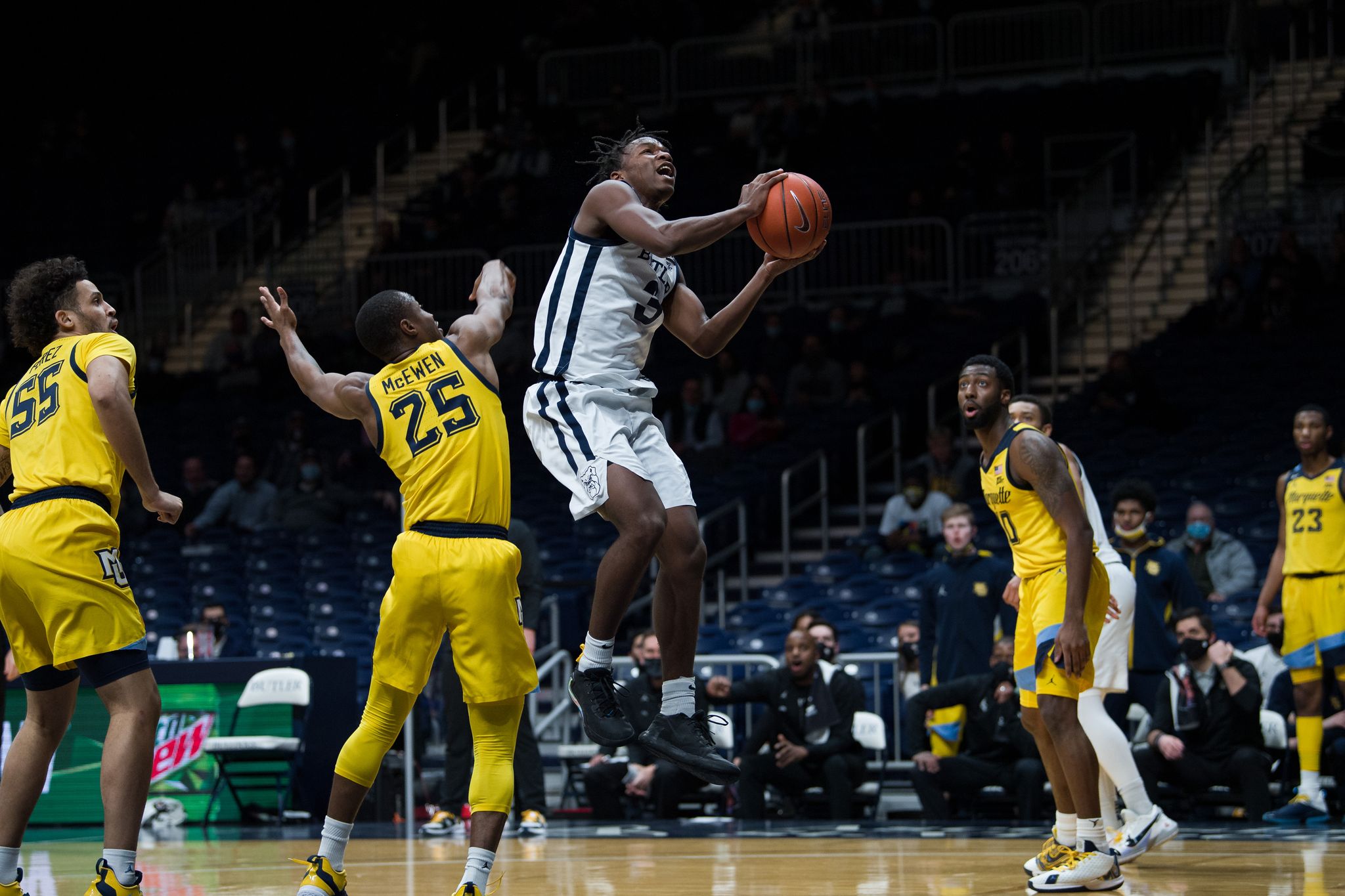 Chuck Harris attempts a layup in Butler’s loss to Marquette last week. Harris scored a team-high 14 points in the Bulldogs’ loss at Xavier on Sunday. Photo by Zach Bolinger.

Just two weeks ago, the Butler men’s basketball team defeated St. John’s in a come-from-behind overtime victory. The win was the Bulldogs’ second in a row, as the team saw opportunities to move up the league standings with winnable games coming up against Georgetown and Marquette.

Since then, Butler has averaged just 57 points per game and dropped three consecutive conference games. The Bulldogs got blown out at Georgetown and in Hinkle Fieldhouse to Marquette, before putting up a fight at Xavier on Feb. 21. Butler was missing three senior starters in that matchup with the Musketeers. Now, the Bulldogs finish their regular season slate with games against each of the top three teams in the Big East.

Seton Hall visits Hinkle Fieldhouse with a 10-6 record in the Big East and is in the NCAA Tournament conversation, while Butler is mostly playing for momentum into next year. This game, which was originally scheduled for Jan. 22, was postponed for what turned out to be a false positive COVID-19 test on Butler’s side.

Here’s what you need to know as the Bulldogs try to avoid a four-game skid.

How to watch/listen: CBS Sports Network, 1430 AM

1. Seton Hall should be coming in frustrated after a disappointing loss last week

This Seton Hall team is not as good as the one that featured First Team All-American Myles Powell last year. This year’s squad, however, is no slouch. This time last week, the Pirates were riding high on a four-game winning streak in the month of February, including NCAA Tournament resume-boosting wins at Providence and UConn.

Last Saturday, Seton Hall’s winning streak was snapped in a 81-75 loss to the same Georgetown Hoyas who gave Butler fits two weeks ago. With a chance to go undefeated in their final eight games, the Pirates could have coasted to Selection Sunday with relatively little worries. Because of that hiccup at Georgetown, Seton Hall is back to fighting for their postseason lives night in and night out.

Bracket Matrix, an aggregation of bracket projections from experts around college basketball, currently has the Pirates as a 10-seed. While Seton Hall may not need to win out to make the Big Dance, a loss to a struggling Butler team would set Kevin Willard’s team squarely on the bubble. After such a disappointing loss against Georgetown, expect Seton Hall to give Butler their full attention. In these two teams’ first meeting this season on Jan. 2, the Pirates went up by as much as 13 before the Bulldogs went on a run to cut their deficit to a single point. In the end, Seton Hall regained control and won, 68-60.

2. Butler comes in more hampered than they’ve been in recent memory

While Butler basketball has dealt with its fair share of injuries over the last few years, the Bulldogs may have it worse right now than in any time since I started following the team a decade ago. On Sunday against Xavier, Butler was without Aaron Thompson, Bryce Nze and Bo Hodges to thumb, groin and calf injuries, respectively. Those three average a combined 30.9 points, 17.4 rebounds and 9.3 assists this season. It’s no wonder the Bulldogs were only able to muster 51 points against Xavier in their absence.

Quite simply, it would take a Herculean effort to win any game this season without arguably their three best players. Of all stretches of the year, this is the worst time for these seniors to be out, too. As mentioned previously, the Bulldogs are about to enter arguably the hardest three-game stretch of any team in the Big East this season.

Should Thompson, Nze and Hodges return, though, it could mean a whole other story for LaVall Jordan’s group. As seen throughout college basketball this year, experience continues to be the means by which good teams succeed. For instance, seniors Thompson and Nze combined for 32 points, 11 rebounds and seven assists in Butler’s upset win over No. 8 Creighton last month. With those two and Hodges back in the mix, the Bulldogs would be in a much better position to spoil the Pirates’ tournament chances.

3. If the Bulldogs win, it will be because of their ability to slow down “Mamu”

Sandro “Mamu” Mamukelashvili continues to be the engine that drives Seton Hall’s success this year. The 6’11 senior from the nation of Georgia has recorded 20 or more points in half of the Pirates’ games this season and logged 24 points, nine rebounds and six assists in the win over Butler last month. While Seton Hall certainly has players like Jared Rhoden and Myles Cale who can also hurt the Bulldogs, the Pirates will go to Mamu early and often. The likely First Team All-Big East selection has recorded double-digit field goal attempts in 11 of his last 12 games.

All season, Butler has struggled defensively against talented bigs, especially since Nze has been sidelined due to injury. Trayce Jackson-Davis, Jeremiah Robinson-Earl and Nate Watson each posted 18 points or more in four games against the Bulldogs. With Nze out, replaced by Christian David and John-Michael Mulloy, Xavier forward Zach Freemantle led the team with 17 points on an efficient 5-of-9 shooting.

This is the penultimate home game of the season for the Bulldogs, who have played much better at Hinkle this season than on the road. If the seniors are able to return, Butler could be in the mix to earn an upset heading into the much-anticipated Senior Day game against No. 8 Villanova on Sunday.