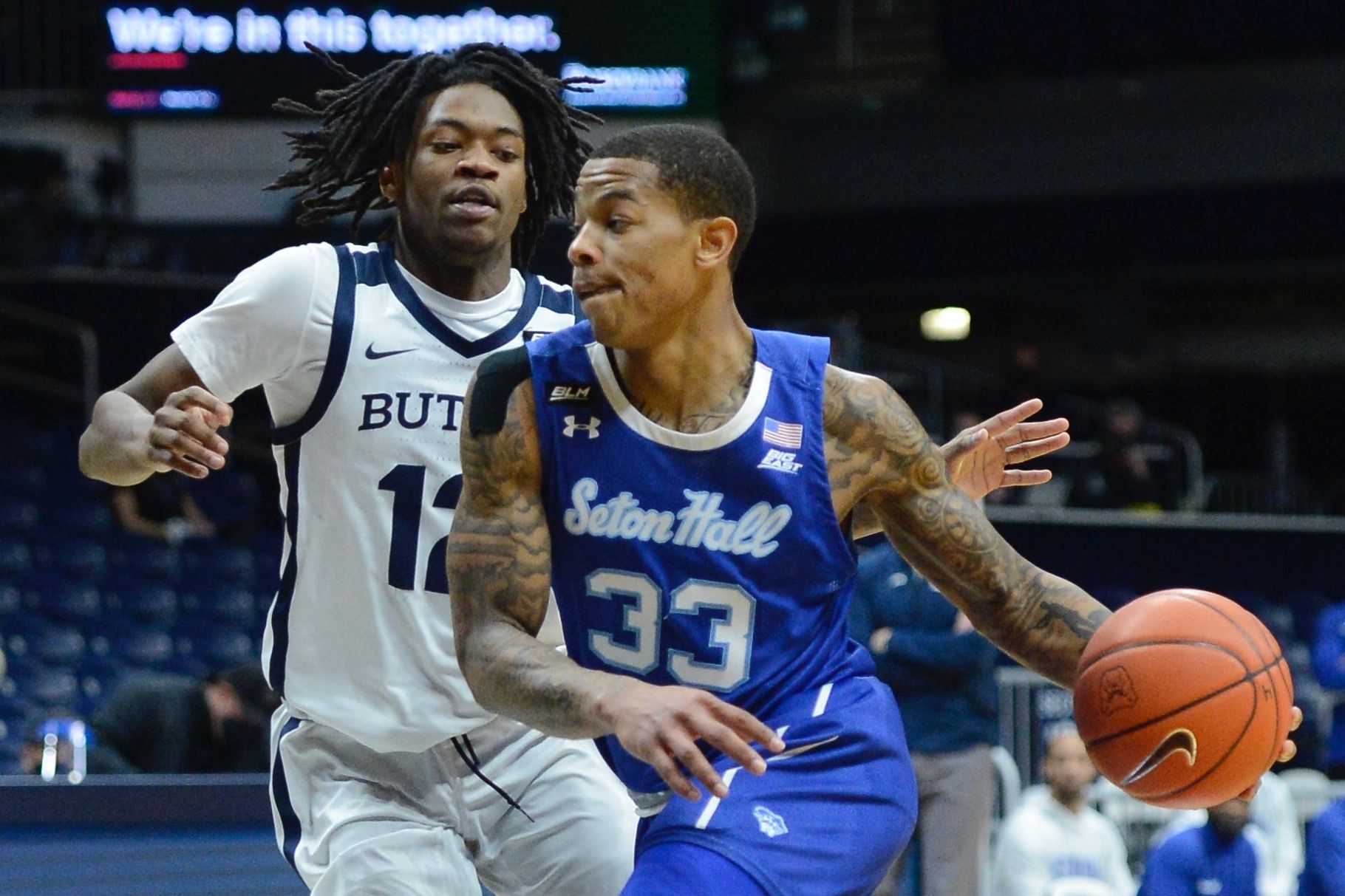 Myles Tate guards a Seton Hall player in the Bulldogs’ 61-52 win over the Pirates on Feb. 24. The 52 points were the fewest Butler had allowed this season. Photo by Zach Bolinger.

The Butler men’s basketball team snapped their four-game losing streak on Wednesday night with a 61-52 win over NCAA Tournament-hopeful Seton Hall. The 51 points is the fewest the Bulldogs have allowed in any game this season. The Pirates’ star forward Sandro Mamukelashvili struggled to just 4-of-13 from the field and five turnovers.

The loss likely knocks Seton Hall out of most NCAA Tournament projections for the time being.

Despite a scoreless first half, Jair Bolden exploded for 16 second-half points as the Bulldogs salted away the game in the final minutes. Bolden also eclipsed the 1,000-point mark for his collegiate career, which includes stops at George Washington and South Carolina. Bolden’s 16 points were a team-high.

The Bulldogs made 15 of their 16 free throw attempts on the night, a remarkable achievement considering they came into the game ranked 332nd in the nation shooting 63% from the foul line. Aside from Christian David, every Butler player hit a free throw against the Pirates.

We go beyond the box score in a game that ultimately may not decide Butler’s postseason fate, but could very well have a say in whether Seton Hall hears their name on Selection Sunday.

1. Butler’s defense was the best it’s been all year

The 51 points actually is a little deceptive because if not for a 3-pointer at the buzzer, Butler would have held the Pirates to under 50 points. In today’s brand of basketball, 50 points is a halftime score for some teams. Seton Hall was forced to fire away from the perimeter as 27 of their 58 shot attempts came from beyond the arc. They only made six of those attempts and even those were highly contested. One play in my mind stands out in particular. Myles Tate got switched on to Mamu, which usually means very bad things. Instead of conceding the easy layup a Butler defender sprints to double.

Of course, that’s just one play out of a 40 minutes of impressive defensive action. Seton Hall went on a 9-0 run to take the lead 11-4 and Butler fans must have thought ‘Oh, here we go again.’ But it was not the same script for the Bulldogs defensively.

2. The Bulldogs held their own on the glass against a much bigger Pirate squad

Was it a blessing to have Bryce Nze back in the lineup, or what? Seton Hall runs out a 6’11 Mamu at power forward in most lineups with a 7’2 Ike Obiagu at center. In theory, the Pirates should have dominated the paint, but that was not the case. Butler allowed Seton Hall to corral nine offensive rebounds but actually had a higher offensive rebound percentage since their seven offensive rebounds were on much fewer misses. Even when Bryce Golden was forced out with foul trouble, David stepped in and boxed out admirably despite only grabbing three rebounds.

Butler committed an uncharacteristic 16 turnovers on the night, but their slight edge on the glass made the difference in the end. With the Bulldogs outscoring Seton Hall by 13 points from the foul line alone, it was going to take a monster effort from the Pirates to turn the tide. It was not just the bigs that stepped up on the glass, though. Chuck Harris — and more on him in a minute — was excellent on the boards with six of them, two of which were on the offensive end. Bolden had six of his own, so it was a total collaborative effort on that end of the floor for the Bulldogs. As Butler moved to a zone primarily for the second half forced the Bulldogs to rebound as a team and they succeeded.

3. At some point, we want to stop talking about the future, but it is blindingly bright.

I know. At some point, we have to stop talking about the future and see results on the court. The seniors who were able to play on Wednesday night did so admirably, but it’s these freshmen that are continuing to turn heads in Hinkle. Harris led the underclassmen with 14 points on 50% shooting from the floor with no 3-pointers. He weaved in and out of the paint, splashed mid-range jumpers and even added five assists to his total statline. Myles Tate’s stats look just as solid on the box score with eight points, three assists and two steals,

But what is most impressive about these freshmen doesn’t show up on a box score. With a NCAA Tournament-hopeful team on the ropes, one expected a late push from Seton Hall. Some youngsters would fade under the heat. But not these two. They’re rock solid when the intensity is highest and that is one of the very many reasons Butler fans are loving what the future holds for this group.

Coming into this last three games against Seton Hall, Villanova and at Creighton, Butler fans would have been thrilled with one win. Now that Butler already has that win, they should play like they have nothing to lose to finish out the rest of this season. That starts with No. 8 Villanova in Hinkle Fieldhouse for a noon tip, Sunday Senior Day. I really hope Aaron Thompson can play for that game, because he of all people has earned this one.