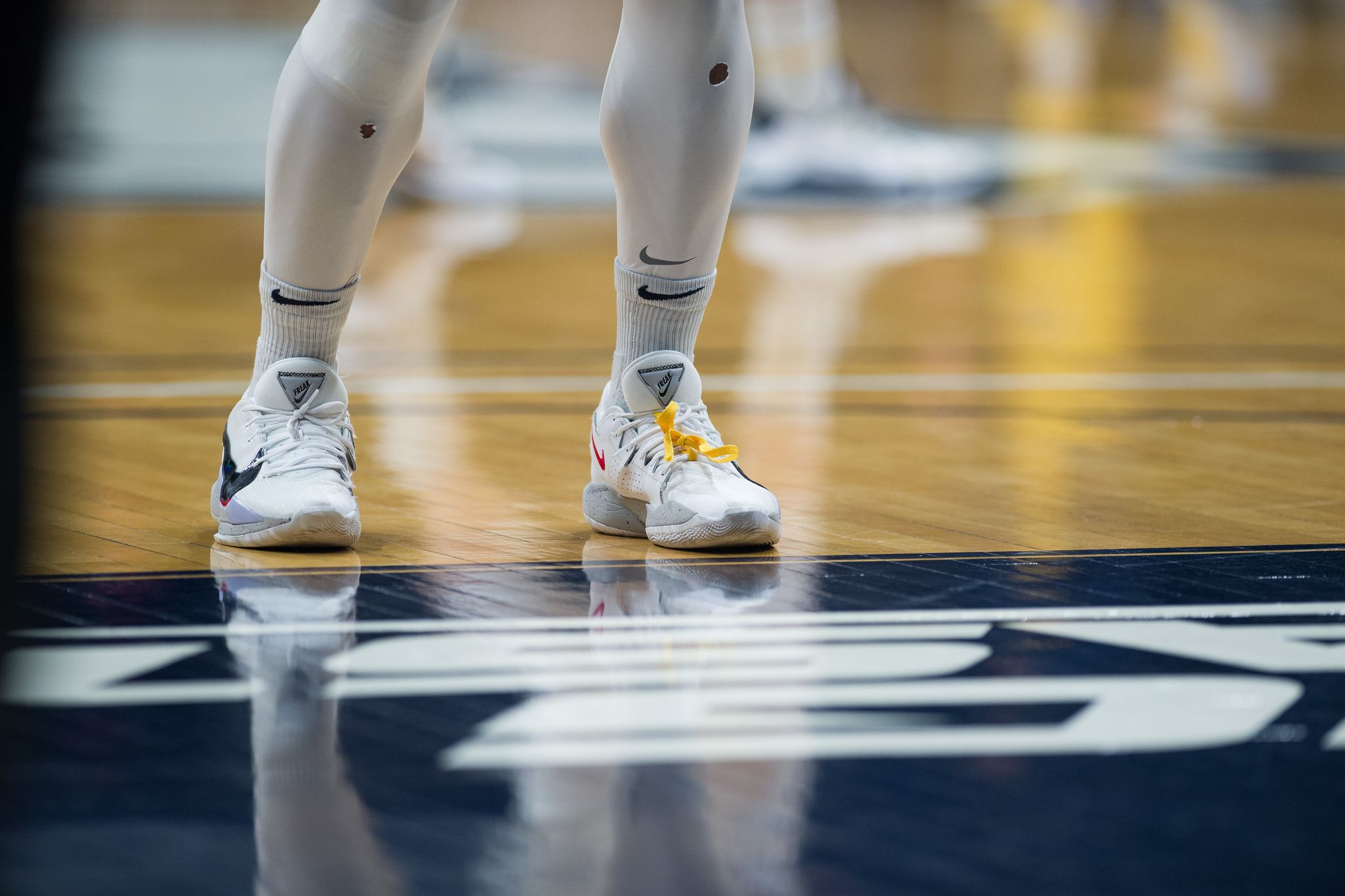 Aaron Thompson attempts a free throw in Butler’s loss to Marquette. The Bulldogs drop to tenth in the Big East standings heading into the final four games. Photo by Zach Bolinger.

The Butler men’s basketball responded from their loss at Georgetown with yet another blowout loss at the hands of Marquette, 73-57. The score did not reflect the nature of the game, as the Bulldogs trailed by as much as 28 points late in the second half. Butler yet again started slow, trailing by double digits less than ten minutes into the game, as the Golden Eagles cruised to just their second win in eight games — both now coming against the Bulldogs.

Marquette put on a basketball clinic in the win. Entering the game ranked tenth in the conference standings, the Golden Eagles fired out of the gates hitting 50% of their shot attempts. Four Marquette players scored double figures in the victory, as Greg Elliott led the way with 17 points. The Golden Eagles scored 24 of their 73 points from the foul line, connecting at 89% clip for the game.

On the other, Butler struggled mightily on offense, connecting on just 34% of their shots attempts. It is the fourth time in seven games the Bulldogs have failed to hit 40% or more of their shots. Chuck Harris was the leading scorer with 21 points, but he hit just 5 shots on the night — all of which were 3-pointers.

The team was unable yet again to avoid falling into a double-digit hole in the first ten minutes. The Bulldogs have now had six such games in a row, dating back to late January. Let’s talk free throws, injuries and slow starts as we go beyond the box score.

What started out as a unique in-game quirk has quickly developed into a chronic issue for this team — falling behind by double digits in the opening minutes. A 12-3 Marquette run turned a tie game in the opening minutes into a nine-point Butler deficit in a blink. The Golden Eagles weren’t done there, either. A Theo John layup with 40 seconds to go in the half capped a separate 8-0 run that put Marquette up for good. Unlike in most games earlier this season, Butler had no fight in them, with a late 14-2 run with the walk-ons in the game dressing up a blowout.

The Bulldogs have struggled with this problem all season. This game marks the 16th game Butler has trailed by double digits at some point in the game. They’ve only played 19 games to this point.

While Bryce Nze’s injury had much to do with this — and more on him in a minute — it seems that no combination head coach LaVall Jordan throws out there works for the Bulldogs. Senior Christian David made his first start, while Jair Bolden came off the bench for the first time this season. Trade senior for senior in the starting five and Butler gets the same result: a deflating opening ten minutes.

2. Some Bulldogs are in extreme slumps

Butler plays at a pace that makes every possession a commodity. When the Bulldogs are shooting under 40% from the floor as a team, it forces the team to play nearly perfectly in every other facet of the game to compensate for the lack of scoring possessions. Aside from the overall team struggles, some concerning individual slumps have begun to appear.

For starters, grad transfer Jair Bolden shot 1-of-8 tonight from the field, as all of his shot attempts came from behind the 3-point line. Since leading the team in scoring at DePaul on Jan. 19, Bolden has made just 15 of 63 field goal attempts. As the leading 3-point marksman on the team, shooting under 24% from the field is crippling. Harris, Butler’s second best shooter on the team statistically, is in the same boat. Since leading the team in scoring in the first matchup with Marquette, the freshman is 16-of-48.

So, fine, Bolden and Harris are struggling from the field. At least there is Aaron Thompson, who has proven he can step up offensively. Not tonight. The senior guard made just two of his eight attempts and uncharacteristically recorded three turnovers in the first ten minutes. When all of those players are slumping at the same time, the sight is not pretty for the Bulldogs.

Fortunately, basketball is a game that more times than not returns to the mean. Bolden isn’t a career under-25% shooter from the field. Myles Tate is better than a 1-for-6 effort tonight. But in years past, someone stepped up for the Bulldogs. Other than Golden, no one did tonight for Butler.

3. Is anyone healthy at this point in the season?

Talk about an injury bug. Apparently, masks don’t work as effectively with injuries as they do with COVID-19. At this point in the season, it seems like every player is banged up and nursing some type of injury.

Nze missed the game with a groin injury, Bo Hodges had a calf strain and Thompson fell on his thumb driving in for a layup. Aside from the struggles this team has had offensively, it’s likely they haven’t been able to all get on the court together for some time. This makes a huge difference with on-court chemistry. While I’m not saying this team would be atop the Big East standings when perfectly healthy, it is a possible explanation for the poor performances these last two games.

After the game, Coach Jordan was asked about the fact that Scooby Johnson was not on the bench tonight. Normally, I would not take much stock into this; the guy’s got a torn ACL. But the response is what was eye-catching for me, too PR-ish for me. This was no doctor’s visit or late night cram for an exam. Within the next few weeks, more information should be available about this absence, and it very well could be a fluke. I feel like I’ve seen this movie before, though.