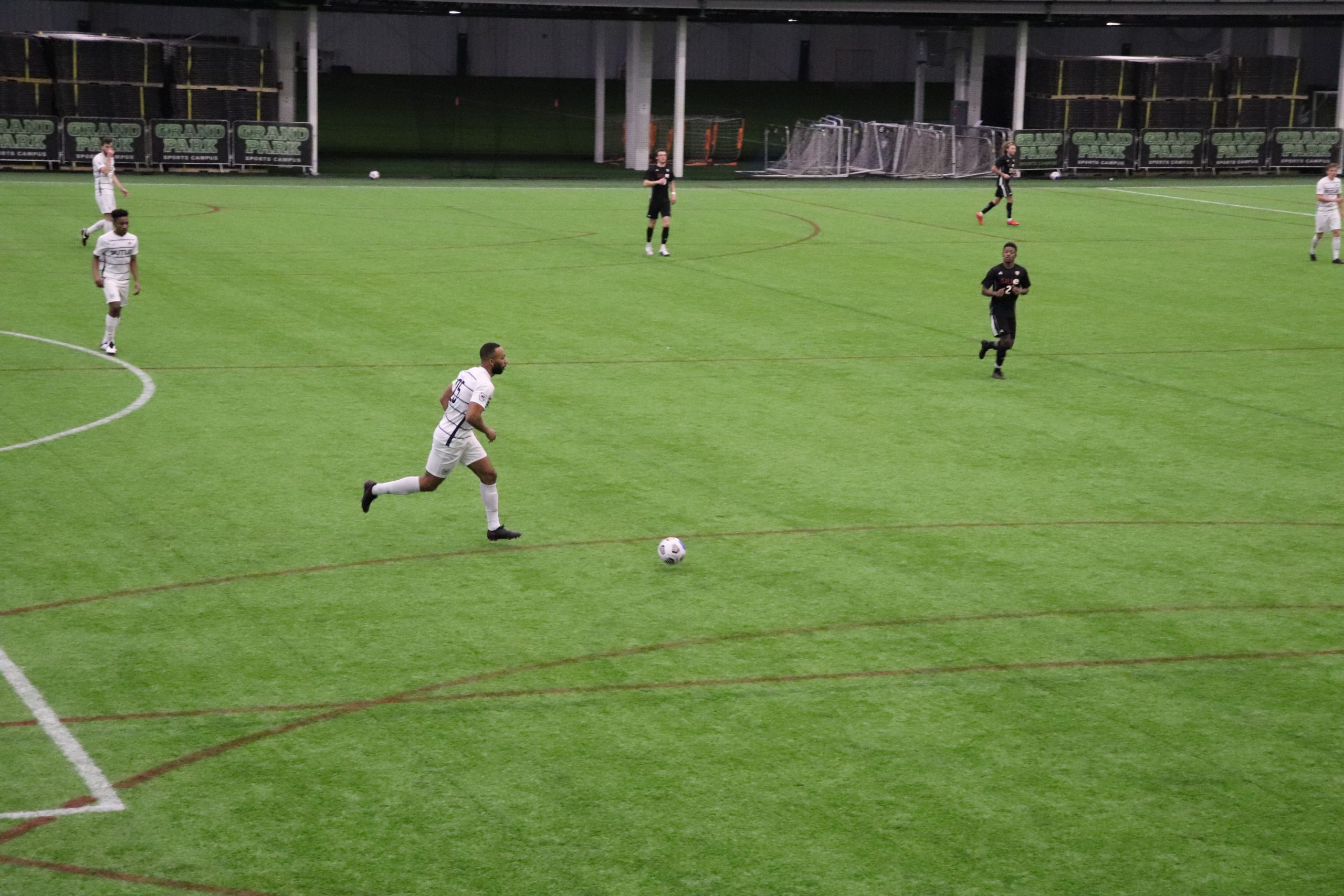 Rhys Myers pushes the ball up the pitch in the Butler men’s soccer team’s season opener versus SIU-Edwardsville. The Bulldogs return to action today against Western Michigan. Photo by Ben Caylor.

A determined coach, talented roster and past success make this year’s Butler Bulldogs men’s soccer team a tough opponent for any team in the country. With play moved to the spring, Butler began their season falling to Southern Illinois University Edwardsville, 2-1, in double overtime.

Head coach Paul Snape is entering his tenth season with the program. Snape has led the Bulldogs to the NCAA Tournament in three of the last four seasons. The program’s previous success has led to lofty expectations, as Butler was picked to win their respective division of the Big East in this year’s preseason polls. Snape acknowledged the team’s preseason accolades, but said the team must take the season day by day.

“I think you break it down into daily behaviors and standards,” Snape said. “Are we training the right way? Are we holding each other accountable? Are we pushing each other on the field?”

Among the five senior departures from last year was forward Brandon Guhl. Guhl led the team with nine goals in the 2019 season and was a focal point in the Bulldogs’ attack. Snape recognized that filling Guhl’s shoes won’t be easy.

“Brandon was a guy who at the end of the day, was always a threat to score goals and we’re definitely going to miss him,” Snape said.

The leading candidate to help fill Guhl’s void is sophomore forward Wilmer Cabrera Jr., who will look to have another standout year. Cabrera Jr. was the 2019 Big East Freshman of the Year and a 2021 Preseason All-Big East selection.

“He’s one of the most technically skillful players in the Big East and dare I say the country,” Snape said. “He just has this fierce desire and determination to win.”

Supporting Cabrera Jr. in the attack is sophomore Hemi Nasser. Similar to Cabrera Jr., Nasser is a shifty forward who will take on defenders and put the opponents under pressure. Junior midfielders Eric Hollenkamp and 2019 All-Big East Third Team selection Jack Haywood play a huge role in providing Nasser and Cabrera Jr. opportunities. The midfield pair are always one move ahead and have the unique field awareness to keep the ball for the Bulldogs.

Anchoring the team are two captains, senior defender Rhys Myers and junior goalkeeper Gabriel Gjergji. In 2019, Gjergji led the Big East in saves and his six shutouts were tied for third. Myers, another Preseason All-Big East selection, said he is focused on using the spotlight to jumpstart the season.

“I don’t look at it as pressure, I look at it as motivation to drive to do better and obviously our end goal is to try and win the Big East and beat all the teams that we can possible,” Myers said.

Myers is a powerful defender who will be crucial to leading the defense. The center back is good in the air, physically demanding and can read the game well. Myers is using this season to hopefully catch the attention of professional teams so he can take the next steps in his career.

The Bulldogs have another talented defender in sophomore Perrin Barnes. Barnes can play multiple positions along the backline, giving the coaching staff the ability to change systems and formations. Barnes commented on the importance of having versatile players as well as what it’s like to play alongside veteran defenders.

“If our systems are not working, we’re not in trouble,” Barnes said. “It’s good that we can almost distribute the pressure and everyone’s being a leader back there.”

Nine of the eleven players who started in the loss to SIUE played vital roles on last season’s team — a team that made an NCAA Tournament appearance but had an early exit in the first round to West Virginia. Getting to the tournament is an accomplishment to be proud of but the disappointment of a first-round loss means this year’s team will be striving for more.

“We have the opportunity to build on what overall is a very good season, 2019, so the guys are really excited,” Snape said. “Those guys want to get back to the NCAA Tournament, we want to be challenging for the Big East honors.”

Butler has three more home non-conference games before Big East play begins March 3. This year, the Big East play is split into two divisions — East and Midwest — where Butler will play home and away matches against Creighton, DePaul, Marquette and Xavier. The Big East championship and the NCAA championship are still set to be played as well.

Although the team didn’t get off to the start they wanted, focus has shifted to their next opportunity. With their eyes set on championships, the Bulldogs know they will have to be mentally tough to reach their goals.