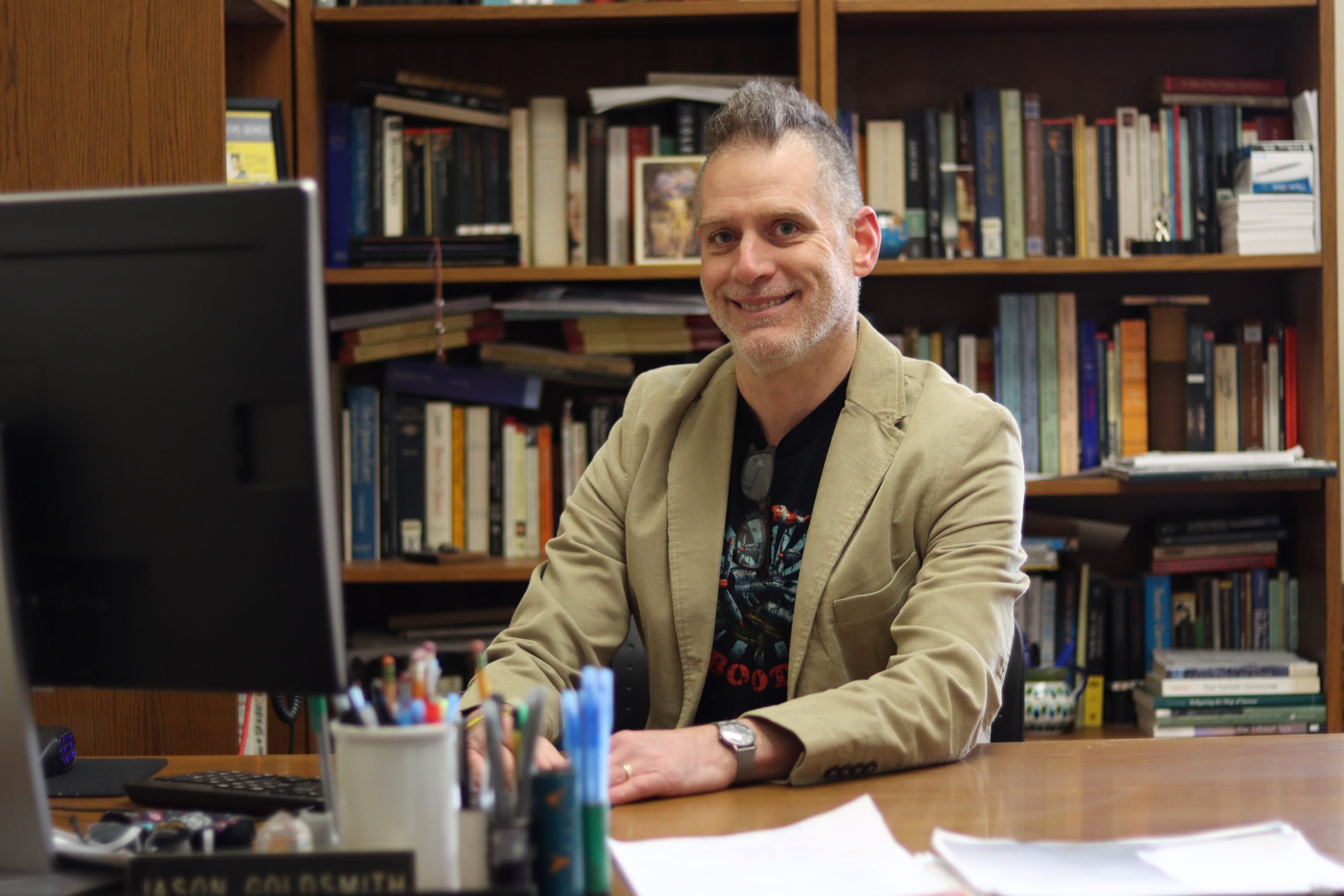 This is A Word With… Jason Goldsmith

Among the amazing faculty within the English department, Jason Goldsmith stands out for his facilitation of honest, candid and open dialogue in the classroom. His classroom atmosphere is the product of diverse life experiences, and his willingness to ask difficult questions always keeps students engaged.

Where did you grow up?

I was born in New York City, but moved when I was very young. I was born in Brooklyn, but when my brother was born we moved to New Jersey. I spent most of my life there until I went to college. I would take trips to the city because I didn’t live very far from Manhattan. I would go there to watch Rangers hockey games, Knicks basketball games, or just to go into the city as I got older. And I enjoyed my school growing up; I was in public schools my whole life. We had a big backyard — and cousins that lived nearby — so we would have pick-up games of football or soccer in the backyard. It was kind of an idyllic white middle class privilege, I was very fortunate that way.

What hobbies did you have as a kid?

My passion ever since I was little was reading, drawing, and making art. I also played a lot of sports up through high school. I became more involved in music during high school, playing guitar and bass guitar in some really bad high school bands. But there has always been this creative side, I’ve always liked reading, not very good stuff, some awful science fiction and fantasy. I had a huge bookcase as a kid. And back in the day people used to have denim jackets with album covers painted on the back — I was one of the people who painted those. And what I find interesting is that these are things that I have come back to at this point in my life. I was also one of those first generation Dungeons and Dragons players. You know, a sort of nerd.

When you went into high school, were you still a nerd?

I was one of those offbeat kids. I had red Chuck Taylors that I bleached and then painted with different patterns. I was a weird art kid. But I also played soccer. I would still say a nerd, but I started to get more into music then. Sports started to take a back seat. I was very into heavy metal at the time, which isn’t like “book nerd” kind of stuff.

After high school, what was your college experience like?

It was interesting because I’m a first generation college student, and it was really great to go with my dad to all these different campus visits. I visited some smaller schools, but I remember being at Michigan University with my dad and we were walking around and the bells rang to mark the end of classes and thousands of students came flooding out of the buildings and I was like ‘Oh my gosh this is great.’ You know, the anonymity that you could have there. It was the kind of place that you could be whatever you wanted to be, however different or unique, you could find your place. And I made some really great friends there my first year who were very artsy and creative. I poured myself into that kind of lifestyle, and going to Michigan, I met so many different people. I grew and developed a lot. I got to pursue my passions; I took the classes that I wanted to take. It was a very liberating experience.

Were there any professors that influenced you or that you really enjoyed during your undergrad experience?

I would say no. I was not a very good student as an undergraduate at Michigan. In high school, school was very easy. But when I went to university, it became harder.  I thought either I could work harder to get good grades, or I could just kind of continue to skate by, have fun, and make art. But I was ready to be done with school after college. The people who inspired me came later in graduate school.

After undergrad you wanted to be done, so what happened after that?

I graduated in the recession and there wasn’t much work, but I ended up getting a job on Wall Street in New York City, which I knew nothing about. I worked in finance for seven or eight years. I started at the bottom doing back office sort of work, and it was cool because I learned; it was something new. It was kind of like I was still in school. I knew nothing about the difference between a stock and a bond. But by the end I was working on bigger things. I loved it, but after awhile you want to be doing something that you really love and want to be somewhere where you really fit in. So ultimately, I realized that this didn’t make me happy. So it was like, “you know what, I’m kind of done here.” I wondered what I was going to do, so I applied to graduate schools.

And what made you decide that graduate school was the next move for you?

Because I had no other idea of what to do. I just knew I liked books. I figured I would do a masters degree and see if I liked it. If not, I would be done in a year or two and I could try something else. I’ve always believed in this idea of reinventing yourself, and I feel so sad when I see people who are so determined and say that they need to do X, Y and Z right now or else their life “won’t turn out the way that I planned.” Life is going to come at you. Be open to different possibilities and don’t think that whatever choice you make now will determine forever your future.

It was wonderful. I was not the smartest person in my class, but I worked hard. I worked for seven years on Wall Street and then when I came back to school I treated it like a job. My friends came up with a verb out of my last name called “Goldsmith-ing.” That meant that I’m not going out, I’m staying in and working. But I just took it seriously. I made some incredible friends there. I have been very fortunate to make those connections.

Ultimately, why did you choose to come teach at Butler?

Part of it was where did I want to live? Indianapolis has really grown in the years that I have been here in amazing ways. There’s a wonderful community here. But I also came for the students. I really enjoyed the students that I met when I was on my teaching demonstration. I’m happy when I step in the classroom and most of the students that I have here are really excited to learn. That’s what I like. I like sitting in a classroom in a circle and saying “what did you think of this?”

Do you feel like the student culture at Butler has changed a lot since you have been here?

From when I was first here, something that I needed to get used to was that the students were very deferential early on and put off by debating and back and forth discussions. That doesn’t seem to be the case anymore. Maybe because of the larger political climate, you see people confronting one another more, and maybe they’re more used to that. I also feel like our students have become more active politically than they were. And I think that all of this is for the good. I think they are more aware of what is going on around them in the world. And they aren’t afraid to speak their minds. To me, as someone who runs a discussion-based class, it has been a benefit.

What gets you out of bed in the morning?

The fact that I have to get my kids ready for school. I joke, you know. It’s a good question. I guess I just want to learn. I’m curious. I want to know about the world. I want to know about things. Right now, I’m obsessed with sentences and I want to find great sentences. I’m very curious and very passionate. This also means that I have been a jack-of-all-trades and a master of none. I follow my curiosity.

What is one of the best things students can do right now?

Really just give themselves over to the process. Buy into it and do the weird stuff that your professors ask. There’s a reason behind it. And if you kind of give yourself over instead of resist, the students who really do that are transformed by the end of the semester. And it’s really hard to do that. And as a faculty member, one of the only good things about COVID is that it has forced us to rethink what we are doing in the classroom. So, if you open yourself up to things that you think you wouldn’t find interesting, and just sort of sit with it for a while, you may learn something new about yourself. Be open to those potentially transformative moments.