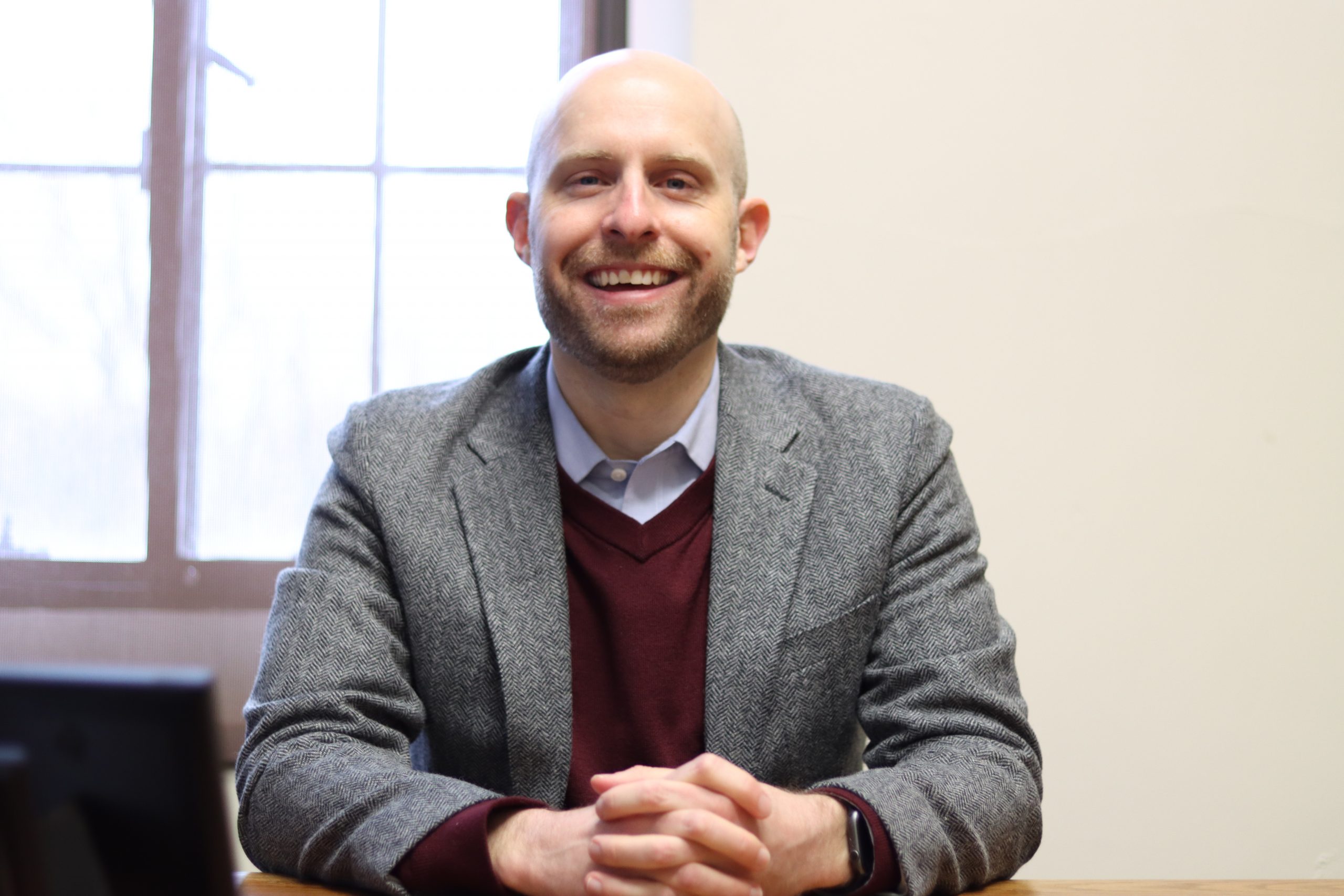 Editor’s Note: questions have been lightly edited for clarity.

This is A Word With…Zachary Scarlett

Many students love Zachary Scarlett for his animated and energetic lecture style, his clear love of history and his compelling classroom discussions. He frequently turns students’ questions into engaging classroom moments. Scarlett’s passions are clear: through teaching history, he seeks to give students the tools they need to explore the greater world and think critically about current events.

What were some of your hobbies as a kid?

I collected baseball cards — passionately. I played sports. I played the trombone from fourth grade to twelfth grade. I was just sort of on my bike and running around with friends in the neighborhood. It was in some ways a typical suburban life. I don’t still collect baseball cards. I tried to get my daughter into it to give me cover for returning to it, but she hasn’t shown any interest.

After high school, was college always the next step for you?

Yeah. I decided I wanted to be a history professor when I was a freshman in high school. Basically, I’ve been living with this decision since I was 14 years old. I sometimes wonder if I should have been an English professor or something like that, but I feel like this is the only track I’ve been on and I don’t feel bad about that.

Was there a moment where you were like, ‘I must become a history professor?’

You know, my dad has always been into history, so I was absorbing it for a long time, but I never realized that I had been and that I could translate history into a career. When I was 14, I started to see how history could work for a career and I started to actually think that I could take this subject and turn it into a career. I just always felt a sense of import of understanding the world. Maybe it wasn’t even history, but just trying to engage with the world in a meaningful way. And trying to understand it as best as I could. It’s the old question of whether you should do a career that you would do even if you hit the lottery. And if I hit the lottery, I would still be doing this.

Did you always know you wanted to focus on Chinese history?

No, I had no idea it was going to be Chinese history. One professor sparked my love and interest in Chinese history. That was it. I took her class when I was a sophomore, 19 years old, and that was a thunderbolt moment. I was floored, I was knocked over. I had never thought about Chinese history before, quite frankly, because high school education doesn’t prompt us to do so. Once that floodgate opened, it never shut. I think that although it was a thunderbolt moment for me, I didn’t just say “I’m going to do this” and commit myself totally. But with each step that I took, like taking more classes, starting to study the language, actually going to China, I was more and more attracted to it. I felt like I just had to learn everything I could, as much as I could.

What was undergrad like? Were you ready to move on to your PhD afterwards?

I had a really great experience as an undergrad. I played rugby in college, so that was a big switch up for me, but it was really important to me. I also met my closest friends who I’m still close with, and I met my wife. So, it was a really meaningful experience, but by the time I was a senior I was ready to get out of there. But, in some ways I feel like I’ve never left undergrad. In some ways I look at my students and kind of feel like we’re going through the same thing, which is ridiculous, but I think that my undergraduate experience still stays with me strongly.

For me, having a place where I can think about the things that I like to think about is such a tremendous privilege. And I feel very fortunate that I have that opportunity to sometimes sit in my office and read a book and then think about it. That is such a privilege, and I recognize that. The student engagement is fantastic. The most rewarding thing for me is taking students to China or trying to replicate the thunderbolt moment that I had. I’ve had a couple of students that had no interest in China, but have taken multiple classes with me, and I don’t think they’ll pursue a career in it, but I feel lucky to have those students and introduce them to that part of the world. And at least arm them with some kind of understanding of the larger world out there. At the end of the day, as a professor, you really have to love college or university or the academy, fundamentally at its core, and what it’s trying to do in order to be a good professor.

After college and after your PhD at Northeastern University in Boston, is that when you started thinking about the Fulbright program?

I did Fulbright when I was a graduate student. I was in my fifth year in graduate school where I spent a year in China, living in Beijing and doing research. And it was, again, wonderful. Looking back, it was such a meaningful time. It was incredibly rewarding to be learning Mandarin in China as well. Language is a process that can really only be understood in its context. You can’t just translate words directly, like changing currency. It has to be understood to really deploy it well in the context where it is spoken. And everything builds on itself. You study the language and you understand the culture more. You study the culture, you understand the history more. It’s just a cumulative process.

Has it been challenging for you to figure out how to frame the historical subjects you are teaching within the current circumstances of our world today?

It’s very challenging because I don’t know a lot of the answers to some students’ questions. I think that one of the great secrets of adulthood is that younger people look at adults and think that they are in charge and they have things under control, and we don’t. The world is just as out of control from my perspective as it was sitting there when I was a sophomore in college. I think when students ask me difficult questions, I try to frame an answer as best I can, but then what’s more important is to get students to continue to ask those questions. And not be discouraged when they can’t find a definitive answer. The questions we ask are always more important than the answers we are able to generate. What I usually say is, you know, the reality is so complicated, and keep asking those questions for the rest of your life.

What do you think is a barrier to asking those difficult questions?

The default position of modern society is to be dull to what’s going on in the world. It’s therefore very easy to fall into a cycle and go through the routine and see problems around you, but be so numb to yourself and to other people that you miss those things. It’s not even that you forget to ask, you just don’t even think about asking. When there are big events in the world and big emergencies, that’s when people start to empathize and think about them and consider what is going on and ask those really important questions.

Do you think you’ve seen any shifts in the student body over the eight years you’ve been teaching at Butler?

From my perspective, I do think students have become more politically engaged and active and willing to speak up for what they feel is a more just and equitable community. I still think that more students should raise their voices, and everyone at the university should listen and respond. I think students are willing to think about and ask questions. And I think that has been happening more.

What made you pick Butler?

Being in a city was really important. The history and anthropology department is an incredibly warm, open and collegial environment which in academia is not a very common thing. But we are all truly supportive of each other. It was important for me to be at a liberal arts college that really valued humanities and social sciences. It was also important for me to be at a smaller university where I could really teach students and interact with them.

Do you have any role models?

There are historians that I really admire in the China field. The best work that I have read lately has been from people who are working on gender and gender studies. Role models who aren’t scholars? I have a deep passion and love for Bruce Springsteen, so I would put him on the list. There’s a really interesting musician named Robert Glasper who does jazz and R&B. I admire their artistry and their craft.

I really truly admire and look up to Greta Thunberg. And think she’s just incredible. If I was ever on the other side of some of her issues, which I don’t think I would ever be, I would just be petrified. She just seems so knowledgeable and committed and never going to yield her values or anything. She’s incredible.

Do you feel like you’ve accomplished the dreams you had as a 14-year-old?