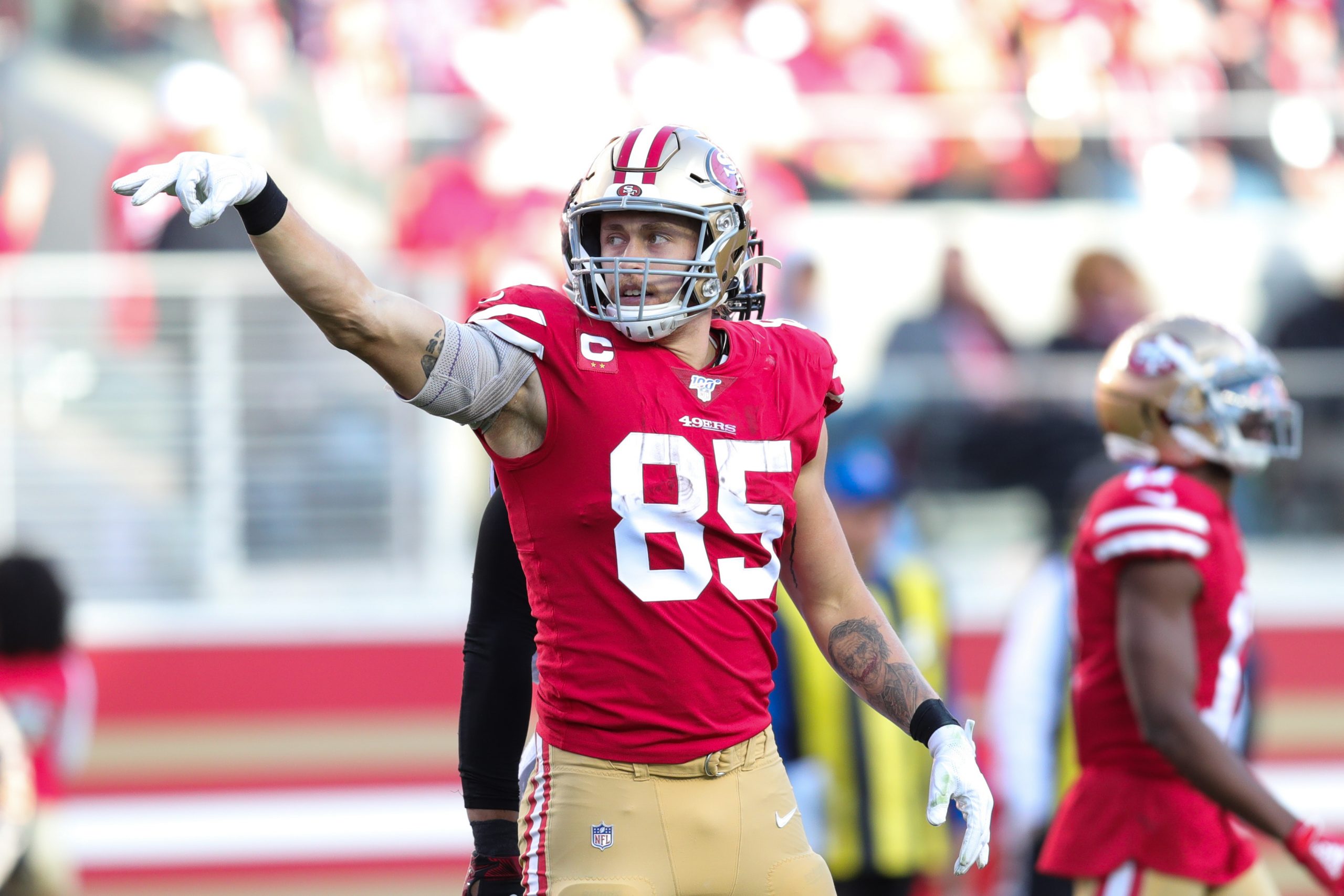 George Kittle celebrates a first down in a game earlier this season. Kittle creates an intriguing Week 17 matchup against a Seattle defense that struggles in the passing game. Photo by USA Today.

While most leagues have finished up their fantasy football championships, there are still a select few who have one more week remaining. This final week is considered one of the most challenging weeks as some teams like the Chiefs, who have already clinched a first round bye may choose to rest or limit the playing time of certain starters like Patrick Mahomes.

With many star players being sat on the last week of the season, this could force fantasy managers to have no choice but to search for new options. Here are the key players to start and sit for the final week of the NFL regular season.

Tom Brady, Tampa Bay Buccaneers. Talk about an obliteration. Last week against the Lions, Brady let all the haters know that this Buccaneers offense is nothing to mess with. Brady threw for 348 yards and four touchdowns in a game where the Bucs scored 34 points in the first half. Now that the offense has been revived, they will look to continue their hot-streak against the Falcons defense that is the second worst in passing yards allowed per game in the league. Brady should have no issues racking up major numbers in their second meeting with the Falcons in the last three weeks.

Kyler Murray, Arizona Cardinals. The Cardinals peaked at the wrong time. After starting the season looking like the best offense in football, the Cardinals have cooled off dramatically. Their most recent example of this was last week when they were only able to score 12 points against a banged-up 49ers defense. In this game Murray threw for 247 yards and ran for 75 yards, but most importantly, he had zero touchdowns. For a quarterback who has been solid all season long, this raises many concerns for fantasy managers looking for a reliable quarterback. This week, those fantasy managers will have to look elsewhere as Murray will have another tough matchup against a Rams defense that ranks the best against the pass as well as the third best against the rush. Murray may have played well the entire season, but this week’s matchup should force fantasy managers to think twice about starting him.

Gus Edwards, Baltimore Ravens. The Ravens’ offense has looked like a train with a head full of steam. Specifically, their rushing offense has played spectacular as they are ranked best in the league in yards per game. In last week’s game against the Giants, the Ravens had three players rush for over 70 yards with Edwards leading all rushers with 85 yards. While Jackson continues to play well as a rushing quarterback, Edwards has established himself as the lead back for the Ravens. This week, Edwards will likely continue to increase his role in the Ravens offense as they will go up against the Bengals defense that has yielded the eighth most rushing yards in the league. Edwards is a solid sleeper that is still available in most fantasy leagues especially against the shaky Bengals defense.

Kareem Hunt, Cleveland Browns. In the most 2020 game ever, the promising Browns gave the Jets their second win of the season. In the Browns defense, they had four wide receivers test positive for COVID-19, but that did not excuse the lack of a rushing offense the entire game. The Browns have been ranked in the top three in rushing yards all season long, but against the Jets, the Browns combined for 45 total rushing yards. Hunt was nowhere to be found as he only ran for 11 yards and a touchdown. Any glimpse of hope for Hunt to bounce back will be shut down this week when they go up against the Steelers who rank eighth against the run. Fantasy managers should be very cautious when deciding to move Hunt into the starting lineup this week.

Justin Jefferson, Minnesota Vikings. The Vikings have found a hidden gem in the draft with Jefferson. When Kirk Cousins lost his go-to-man in Stefon Diggs in the offseason, it didn’t take long for him to find a new replacement. Since joining the team this season, Jefferson has the eighth most receiving yards in the league. His outstanding performances should have no problems putting up more big numbers this week against a Lions defense that has allowed the third most receiving yards in the league. Jefferson’s turning into a star right before the NFL fans’ very eyes, so fantasy managers should make sure not miss out on his success.

Tyler Lockett, Seattle Seahawks. The once fantasy reliable option has been recently overshadowed by the rest of his offense. After starting the season with incredible performances each week including one week where he scored 52 points in fantasy, Lockett has fallen off a cliff. Over the last nine games, Lockett has only been able to get into the endzone once. This is unacceptable for fantasy managers looking for a solid wide receiver on offense. This week, the Seahawks will face the 49ers defense that just held an elite reciever like DeAndre Hopkins to just 48 receiving yards. Since Lockett has been such a failure in the second half of the season, there is no reason to start him for any reason in the final game of the season.

George Kittle, San Francisco 49ers. The legend himself has returned. After suffering a foot injury in Week 8, Kittle surprised many by picking up right where he left off by catching four passes for 92 yards. Kittle return is huge for all held onto Kittle for the last nine weeks hoping at some point he would eventually return. This week, Kittle will go up against the Seahawks defense that ranks dead last in passing yards allowed per game. “The People’s Tight End” needs to be moved into the starting lineup in every league immediately.

Evan Engram, New York Giants. Engram has been a boom-or-bust player for the entire season. Some weeks like last week he will put up numbers like seven catches for 65 yards and others like two weeks ago, he will only have two catches for 18 yards. While some fans may blame the fact that Engram is part of an offense that has continuously switched quarterbacks almost every week, his ability to gain a reliable amount of targets each game is inexcusable. Even though Engram will face a Cowboys secondary that has allowed the seventh most total yards this season, his inconsistencies on the field is not worth taking the risk.

Brandon McManus, Denver Broncos. The injury-plagued Broncos season may be lost, but there is still one more way to get back on track before next season, and that is to go out and beat the Raiders. With many players like Drew Lock fighting for his job in the future, the Broncos will do anything to win this week. Fortunately for the Broncos they will be up against a Raiders defense that allowed the fourth most points in the league. This means that McManus will have plenty of opportunities to put points on the board for the Broncos and the fantasy managers. McManus should be ready to produce big numbers in their final AFC West clash of the season.

Jake Elliot, Philadelphia Eagles. Just when a glimmer of hope shined down for Eagles fans on Jalen Hurts, the light disappeared as quickly as it appeared. All the Eagles had to do was knock off the Cowboys last week to keep their playoff hopes alive, but instead, the Eagles choked and lost by 20 points. The Eagles’ playoff chances are all, but gone meaning it is time to start focusing on next season. The Eagles still have one more game to get through before they do so and that is against the Washington Football Team who have allowed the fifth least points in the league. With the Eagles quite possibly giving up and their matchup not being so favorable, Elliot’s chances of scoring big points are all but gone.

Baltimore Ravens Defense. Lamar Jackson and the Baltimore defense have found their groove. Over the last few weeks, Baltimore has found a way to win with their most recent game against the Giants where they held them to just 13 points. This week, the defense should have no problem shutting down a Bengals offense that has scored the sixth-least points per game in the league. With the playoffs on the line for the Ravens, expect them to wreak havoc on the shaky Bengals offense.

Chicago Bears Defense. Three weeks ago, all seemed lost for the Chicago Bears as they choked against the Lions, but fast forward to the present and the Bears chances to make the playoffs have risen significantly. Players like Khalil Mack and Roquan Smith have stepped up to lead this Bears team on a three game winning streak. However, the hot streak will have a tough time this week against the scoring machine in the Packers offense that ranks the best in points scored per game. While the Bears defense has finally got it going again, this week’s matchup means their defense should be avoided at all costs.