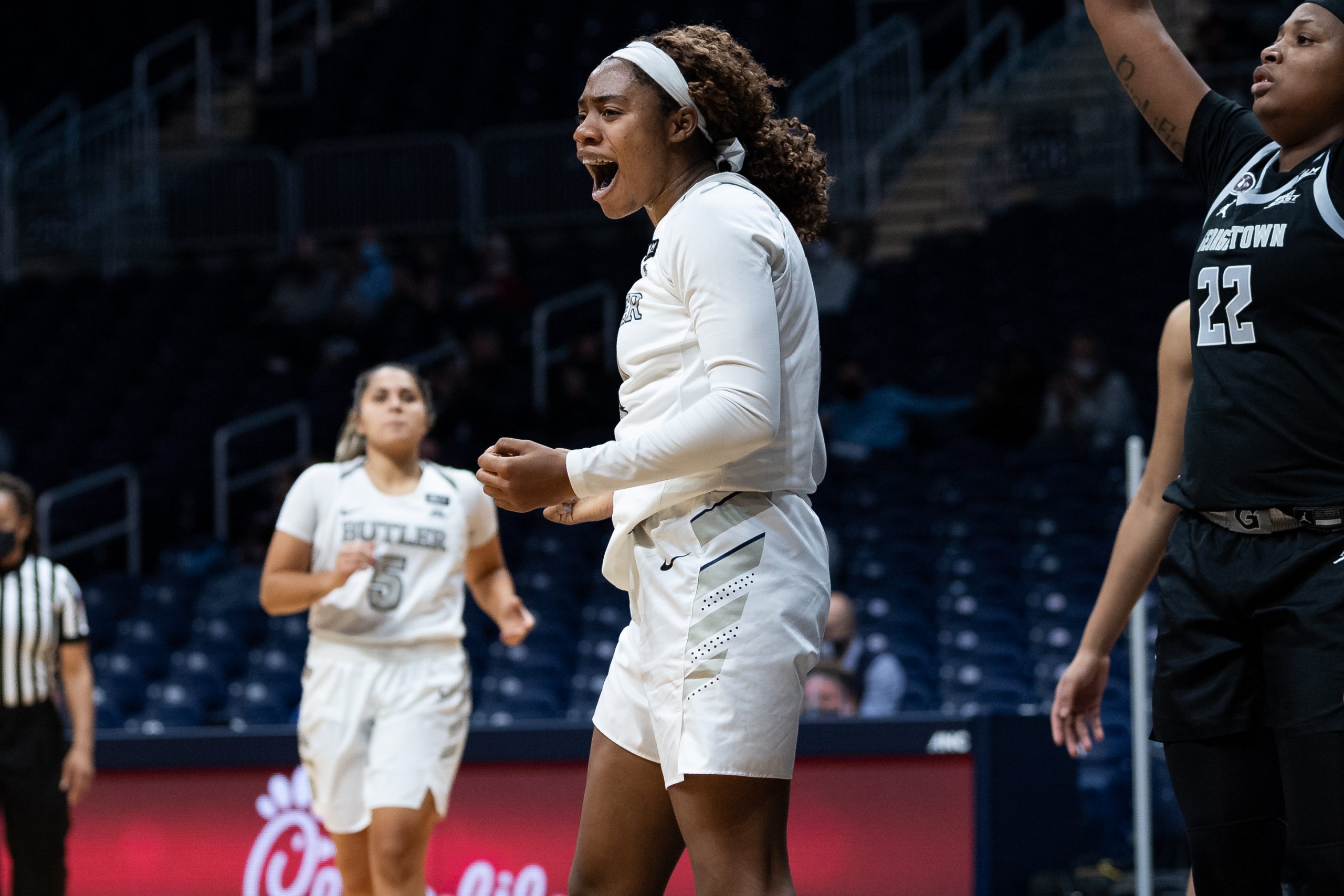 Okako Adika celebrates after a play in a game earlier this season. Adika scored 16 points in the Bulldogs’ loss to No. 18 DePaul on Jan. 21. Photo by Butler Women’s Basketball on Twitter.

The Butler women’s basketball team lost to No. 18 DePaul at Hinkle Fieldhouse, with a final score of 80-66. Senior guard Genesis Parker led the Bulldogs with 18 points, six rebounds and four steals. Butler’s leading scorer Okako Adika added 16 points, and redshirt senior Jaia Alexander notched a double-double of 12 points and 10 boards. The Bulldogs fall to 1-10 on the season.

This game was the 18th meeting between these two programs, and each of the previous 17 ended with the same result—a DePaul win. From that statistic alone, it’s a safe assumption that Butler had their hands full with this matchup. However as the game began, it was clear that the Bulldogs were ready to compete against the Blue Demons.

On the Bulldogs first possession of the game, Annilia Dawn’s shot fake got her defender to jump before she drove to the hoop and kicked it out to a wide-open Micah Sheetz who splashed in a 3-pointer to open up the scoring. The Blue Demons scored on their next possession, and Parker scored her first bucket of the day a minute later, and then went one of two from the line a few possessions later. The score remained at 6-2 over the next two minutes before redshirt freshman point guard Tenley Dowell scored in transition to give Butler a six-point lead with a shade over four to play in the first quarter.

Over the final four minutes of the first quarter, DePaul showed exactly why they are nationally ranked, showcasing their full-court press and offensive prowess. The Blue Demons went on a 15-4 scoring run over that stretch, including scoring a layup at the buzzer to close the quarter. The lone buckets for the Bulldogs came off a nice spin-move and jumper from Alexander and another Dowell layup.

The Blue Demons continued their scoring run as the second quarter opened, hitting a 3-pointer on their first possession and scoring a layup a minute later to extend their lead to 10. Immediately following that score, Parker found an open Adika in the corner and the 47.6 percent 3-point shooter knocked down the shot. This sparked a 9-4 Butler scoring run, with all nine Butler points coming from Adika. She went one for two from the line after a pair of DePaul FTs, and after an offensive rebound, Parker found Adika in the same spot as her last three and she knocked it down again. Just a few seconds later she stole a cross-court pass and took it the rest of the way for two, cutting the deficit to five points.

Over the next few minutes, the two teams traded baskets, but DePaul’s full-court press started to wear on the Bulldogs, and the Blue Demons took advantage of the turnovers they forced. In the final minute of the half, DePaul forced two turnovers before Butler crossed midcourt, and turned both into easy baskets. This capped off a 15-6 DePaul scoring run to end the half, giving them a healthy 41-27 lead at half.

Despite DePaul scoring ten seconds into the second half, the Bulldogs had a strong start, thanks in large part to Alexander. She grabbed an offensive rebound on Butler’s first possession and put up a free-throw line jumper to barely beat the shot-clock buzzer. Following another DePaul layup, Butler broke through the press and Alexander found Adika under the hoop on a nice feed for two. On the next Bulldog possession, Alexander drew a foul and hit both of her shots from the charity stripe.

DePaul scored a second-chance bucket to extend their lead to 14, but on the next possession, Adika found Parker behind the line and the senior hit the shot with confidence. Following two misses from DePaul, Alexander hit a long two to cut the Blue Demon lead to single digits — the nine point deficit is the closest the Bulldogs would get for the remainder of the game. Over the next two minutes, DePaul went on a 9-0 run, extending their lead to 56-38. Parker scored five points over the final five minutes of the quarter, but they weren’t enough to cut into DePaul’s lead, as the quarter ended with a 65-46 Blue Demon advantage.

The Bulldogs outscored DePaul by five in the fourth quarter, with Dowell scoring half of Butler’s 20 points. She hit back-to-back threes with five minutes to play, but the game was too far out of hand at that point. Butler finished the game on an 8-2 run over the final four minutes, capped off by a Sheetz steal and fastbreak-and-one score with less than 30 seconds to play.

DePaul’s full-court press worked versus the Bulldogs, as the team forced 26 turnovers — 10 from Parker — and turned those into 31 points. Butler also struggled to defend the paint, as the Blue Demons scored over half of their points under the basket. This was not a bad performance for the Bulldogs by any means, but a team like DePaul will expose any weaknesses that a team has, and they did exactly that tonight.

Butler returns to action this Sunday, Jan. 24 at 2 p.m. when they take on Marquette at Hinkle Fieldhouse. This game caps off Butler’s hardest stretch of the season, as they play the top three teams in the Big East in just six days.