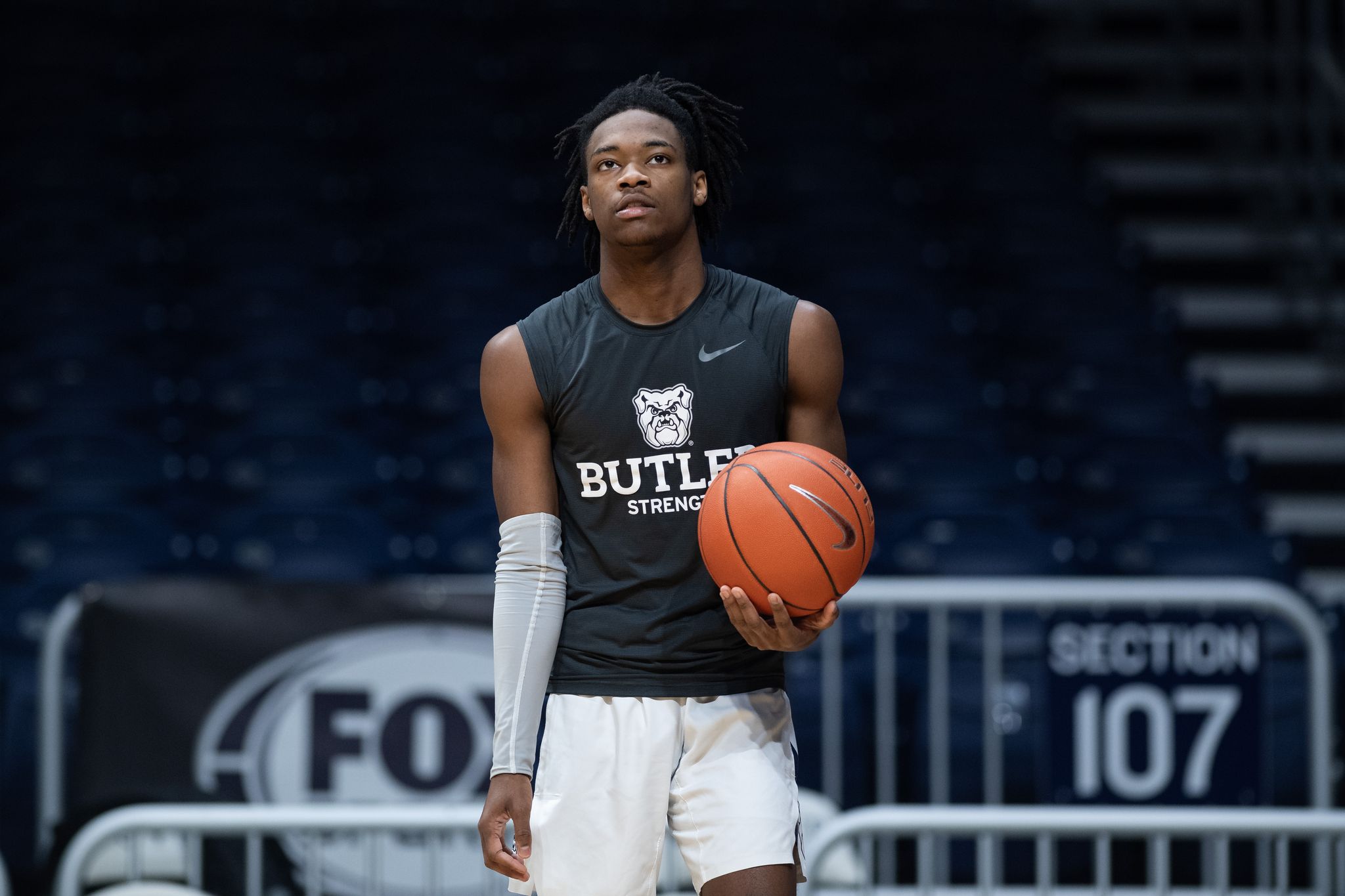 Myles Tate warms up before Butler’s win over No. 8 Creighton. Butler faces Xavier for the first time since March 7, 2020, Butler’s last game of the season last year. Photo by Zach Bolinger.

On Mar. 7, 2020, then-Butler senior Kamar Baldwin rose up from beyond the 3-point line to hit a game-winning shot to win the final game of the regular season over Xavier, 72-71. Unbeknownst to anyone, it would be the final shot of Baldwin’s career and the last seconds of a historic season for Butler basketball. Now, 329 days later, the rivals reunite for the first time since that day. Here’s what you need to know as Butler returns to Hinkle Fieldhouse to face Xavier.

1. When they’ve played, Xavier has been quietly a really good basketball team

With the losses of Naji Marshall and Tyrique Jones, Xavier faced a similar problem at the beginning of the season in how they would replace all of that production. While the Musketeers don’t get a lot of media attention outside of the conference, this team has had a quietly solid season. The group earned wins over the usual collection of mid-major teams as a warm-up to the season, but Xavier exploded onto the scene with a 99-77 win over Oklahoma, a win that is looking better and better by the day. Since then, four of five league games for the Musketeers have been decided by single digits. Travis Steele’s group earned a win over tournament-hopeful Providence off a game-winning 3-pointer from Colby Jones on Jan. 10. After that game, Xavier entered a pause due to COVID-19 and will return on Saturday against Butler.

However impressive their season to this point — which includes a brief stay in the AP top 25 poll — the Musketeers have not been perfect. The team fell, 85-68, at home versus Seton Hall on Dec. 30, making just five of their 24 3-point attempts in the losing effort. While shooting under 30 percent from deep in conference play, Xavier does not pose a huge threat to Butler’s 3-point defense that has greatly improved since the beginning of the season.

2. Zach Freemantle and Paul Scruggs are the Musketeers’ go-to guys

With the previously mentioned departure of Marshall and Jones, Xavier’s third and fourth-leading scorers from last year’s team have stepped up admirably. Zach Freemantle, who averaged 7.5 points per game a season ago, has more than doubled that scoring average. The sophomore forward averages 15.8 points and 7.9 rebounds per game while shooting over 50 percent from the floor. Paul Scruggs, the senior from Indianapolis, has been no slouch this year either, averaging 13.8 points per game — including a season-high 29 in the conference opener against Marquette — and 1.8 steals per game, good for second in the league.

The two combined for 48 points in the marquee win over Oklahoma and look to do more of the same against a Butler defense that has struggled at times this year. While Aaron Thompson is certainly qualified to take on Scruggs for the majority of the game, the same can not be said for who will guard Freemantle. Through foul trouble, injuries and other availability issues, coach LaVall Jordan has had a thin rotation of forwards to throw at opposing bigs.

Forwards have taken advantage of Butler this year, with the likes of Jermiah Robinson-Earl, Trayce Jackson-Davis, Nate Watson, Sandro Mamukelashvili and Julian Champagnie each scoring 18 or more points against Butler this year. However, the challenge of coming back from a COVID-19 pause cannot be taken lightly. In Butler’s return from their break in action because of the pandemic, Butler struggled to get back to their usual selves. If Freemantle comes into Hinkle playing like he has this season, he could cause fits for the Bulldog defense.

3. Offensive and defensive discipline will be key for the Bulldogs

Xavier has a few areas of the basketball game they love to utilize to their advantage. The Musketeers average an impressive eight steals per game, with four players averaging a steal or more per game. While Butler has limited their turnovers in part to their measured pace of play, this would not be the best game to be loose with the basketball. Xavier ranks in the top half in the conference in rebounding, so any extra possessions given away will be a backbreaker for Butler.

While the Musketeers are not a good 3-point shooting team overall, that doesn’t mean they are devoid of hot shooters than can make a big difference. Nate Johnson has averaged over 50 percent shooting from deep through 12 games this season, making nearly three per contest. If Butler is relaxed on their scouting and defensive discipline, losing Johnson could mean losing the game, too.