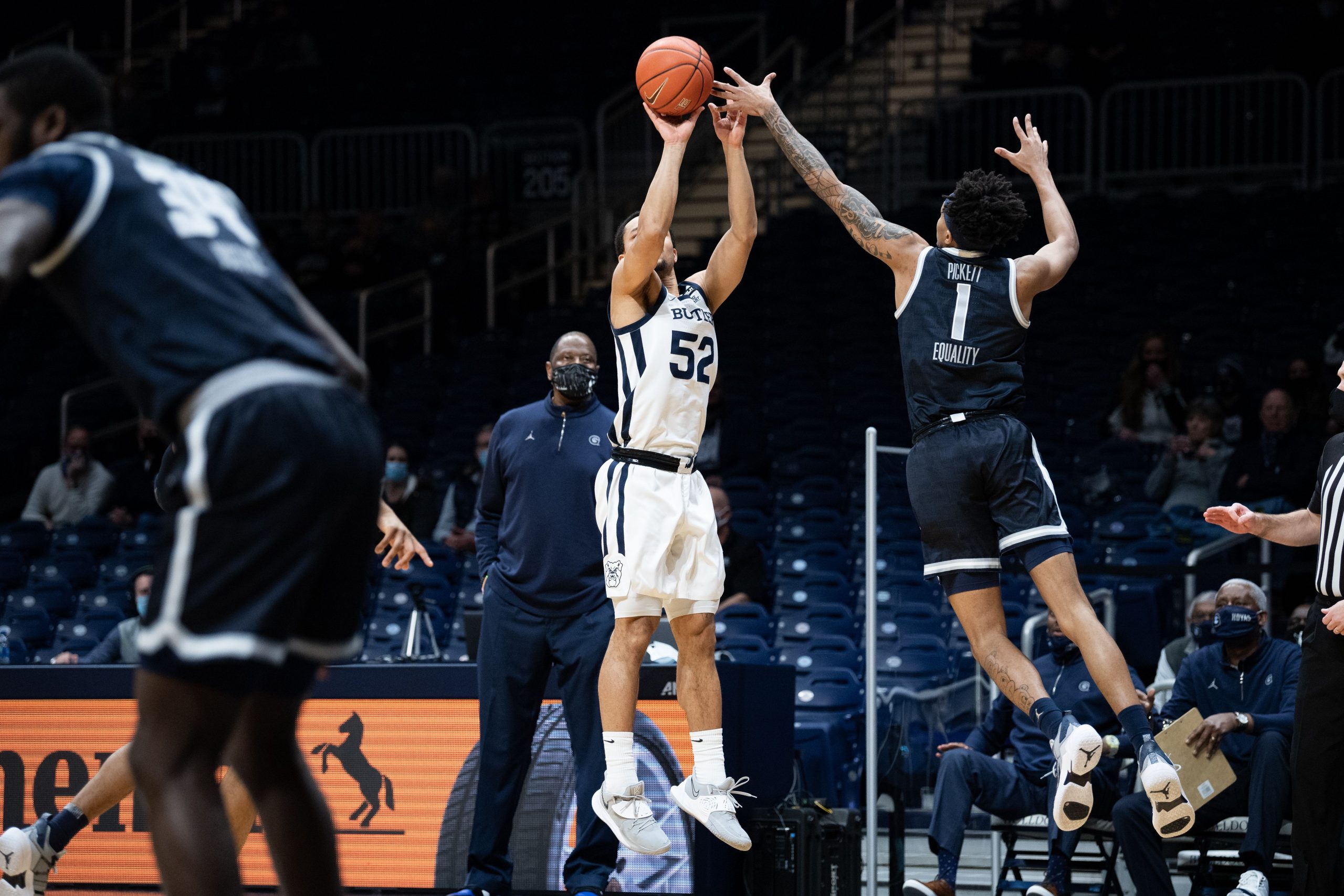 Jair Bolden shoots a 3-pointer in Butler’s 63-55 win over Georgetown on Jan. 6. Bolden scored 13 points and grabbed six rebounds in the win. Photo by Zach Bolinger.

After possibly their most impressive half of basketball this season, the Butler men’s basketball team returns to Hinkle Fieldhouse to face the newest member of the Big East conference — the UConn Huskies. UConn, a member of the American Athletic Conference since the old Big East disbanded in 2013, has achieved relative success so far in the new conference. The Huskies received votes in this week’s AP poll. Here’s what you need to know as the Bulldogs and Huskies clash for the first time since the 2011 National Championship Game:

1. Butler’s frontcourt will be tested

Through Butler’s first seven games of the season, one area the Bulldogs had held a considerable advantage over their opponents was on the defensive glass, good for top 15 in the country. However, Georgetown certainly didn’t have much trouble, grabbing 13 offensive rebounds, leading to several second chance opportunities in the first half to take a lead in Hinkle. If Bryce Nze and Bryce Golden struggled with the Hoyas’ size, they’re in for another long afternoon against UConn. The Huskies roster six players 6’9 or taller, offering nonstop harassment on the glass and at the rim.

Dan Hurley’s squad currently snares nearly 16 offensive rebounds per game on its opponents, good for No. 3 in the country. Even against one of the best bigs in the country in USC’s Evan Mobley the Huskies were able to wrestle away 15 boards from the Trojan defense. Considering how slowly UConn plays — more on that in a little bit — those extra opportunities are gamechangers for a team that doesn’t light it up offensively. It will take a team effort for the Bulldogs to limit its opposition to one shot attempt on Saturday as the Huskies’ leading rebounder is 6’6 Tyrese Martin, who could be a tough matchup for any Butler player. On top of securing boards, staying out of trouble will be crucial for Bulldogs bigs considering how thin Coach LaVall Jordan already is at forward.

2. James Bouknight would be a handful for Butler’s defense

James Bouknight was named to the All-Big East Second Team in the preseason — same as Nze. That may be a laughable gaffe come the end of the season considering many Big East coaches hadn’t faced the sophomore guard yet. The former top-100 recruit is averaging 20.3 points, 5.3 rebounds and 1.5 steals per game through six games for the Huskies. The tricky part for Butler is who stands across from Bouknight. At 6’5, he could prove to be too big for any of the Bulldog guards, but too quick for any of forwards that are suiting up in a Butler uniform at this point in the season.

Although David Duke is a better shooter than James Bouknight, he offers an adequate comparison in terms of size and usage. That analogy probably doesn’t sound appealing to a Butler fan, as David Duke gouged the Bulldogs for 22 points, 13 rebounds and 8 assists on 9-for-11 shooting from the field on Dec. 30. However, Bouknight is questionable for Saturday’s game after hyperextending his elbow in the Huskies’ win over Marquette on Jan. 5. Bouknight shot 3-for-12 in the game and UConn still walked out of Milwaukee with a double-digit win because of their defense, which brings us to…

IndyStar’s David Woods described Butler’s win over Georgetown on Jan. 6 as “bullyball”. The FS1 broadcast team called it a “rock fight”. Whatever verbiage one wishes to describe the Bulldogs’ 63-55 win over the Hoyas will be put to good use on Saturday against UConn. Of the four high-major opponents the Huskies have faced this year, they have only allowed one team to score more than 61 points in 40 minutes and that was the high-flying Creighton offense who scored 66 in regulation before adding 10 more in overtime. The point is, Hurley has embraced the way Big East teams used to play in the Patrick Ewing days: physical, grind-it-out basketball that is not for the faint of heart. Considering the Huskies may be missing their only double-digit scorer on the team on Saturday, expect the UConn defense to ratchet its intensity even more. The Huskies have limited their opponents to a putrid 27 percent shooting from 3-point range this season, for example, and UConn is one of the slowest-paced teams in the country.

On the contrary, Butler has had some its most successful games from deep in their last two games. The Bulldogs knocked down a season-high 11 in the loss to Seton Hall while Chuck Harris connected on a career-high four against Georgetown. Expect UConn to try to muck up the Bulldogs offense, which has already had stretches of extreme inefficiency this year. If you like 9-3 football final scores, you may be in for a treat when UConn pays a visit to Hinkle on Saturday.