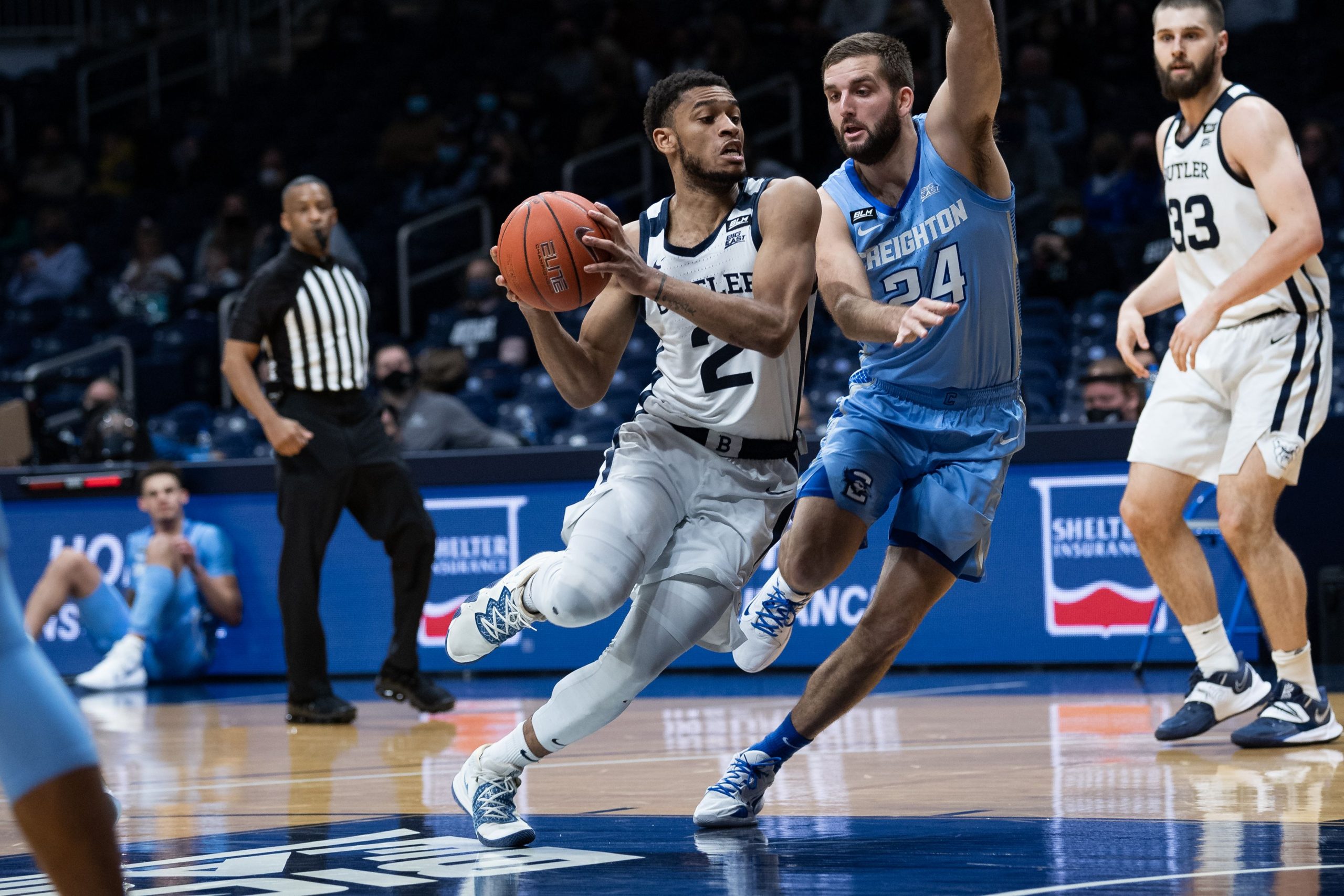 Aaron Thompson drives to the rim in Butler’s 70-66 upset victory over then-No. 8 Creighton on Jan. 16. The Bulldogs look to extend their winning streak to three games at UConn on Jan. 27. Photo by Zach Bolinger.

After their game on Jan. 22 was postponed due to what was later determined to be a false positive test result for COVID-19, the Butler men’s basketball team returns to action on the road against UConn. Here’s what you need to know as the Bulldogs take on the Huskies for the second time in 18 days:

1. UConn did not play well for the two weeks they were ranked

Over the last few weeks, Tyler Polley and RJ Cole have stepped up for a short-handed Huskies over the last couple of weeks. However, if Dan Hurley’s squad has learned anything over their most recent span of Big East games, it’s that there is no replacing James Bouknight. The Preseason All-Big East First Team selection was averaging a shade over 20 points per game in six games played this year before injuring his wrist, later requiring surgery.

Since the Huskies walked out of Hinkle Fieldhouse on Jan. 9 with a 72-60 win, UConn was ranked in the AP poll for the first time since the 2016-17 season. Unfortunately for the Big East newcomer, the number by their name didn’t last long. UConn defeated Big East cellar dweller DePaul by single-digits before falling at home against St. John’s on MLK Day and coming up short against Creighton. This is the first game in which the Huskies are unranked again.

2. Huskies risk looking ahead of the Bulldogs

UConn has endured through two separate pauses for COVID-19 this season and the Huskies are getting their money’s worth of games in the second half of the season as a result. The game against Butler in Gampel Pavilion is the second of a four-game stretch over nine days for the group. Possibly their biggest game of the season awaits them on Jan. 28 as No. 3 Villanova comes to Storrs for the first time since Shabazz Napier donned the UConn jersey as both schools were a member of the old Big East.

With so much anticipation leading up to that game, Butler could take advantage of a classic look-ahead spot. If the Bulldogs can catch the Huskies with a lack of focus, Butler has the ability to leave Storrs with a semi-upset. Over the Bulldogs’ recent two-game winning streak, they’ve allowed just 42 points in the first half between both Creighton and DePaul games.

With UConn scoring struggles offensively over their last two games — the Huskies scored just 17 points in the first 16 minutes of the first half against Creighton on Jan. 23. —, the Bulldogs could turn this game into a low-possession, low-scoring affair that they tried to play in these two’s meeting at Hinkle just a few weeks ago. The short-handed Bulldogs should have been able to get some rest in the midst of the COVID-19 scare, something the team has been able to get little of since their pause in December. Look for Aaron Thompson to key in on Cole, who has been the Huskies’ leading scorer over their last two games. If the Bulldogs can keep UConn under 60 points — easier said than done —, Butler has a real possibility of extending their winning streak to three games on Tuesday night.

3. If Butler wants to make a run at the postseason, it starts with a win here

Is this a little premature to be slotting Butler into contention of a postseason spot? Possibly, but their prospects are more promising than one may think. At just 4-5 in the conference, the Bulldogs sit at the bottom of a highly congested area of the Big East conference. With even just a slight winning streak, the Bulldogs could realistically climb up to as high as fourth in the conference by the end of the month.

JaKobe Coles announced on his Instagram he would miss the remainder of the season with a meniscus tear while Markeese Hastings remains out due to personal reasons. In all actuality, the Bulldogs have no business being in the position they are, but fans have been used to hearing that from this program for years. However, time is not on Butler’s side to get this run going.

With an unexpected win in Storrs followed by wins against top-half teams Xavier and Marquette, coach LaVall Jordan and company will have firmly entrenched the Bulldogs for postseason conversation. But it all starts with this game against UConn as a loss would likely set Butler back to a point where they would need a miracle for their name to be called on Selection Sunday.