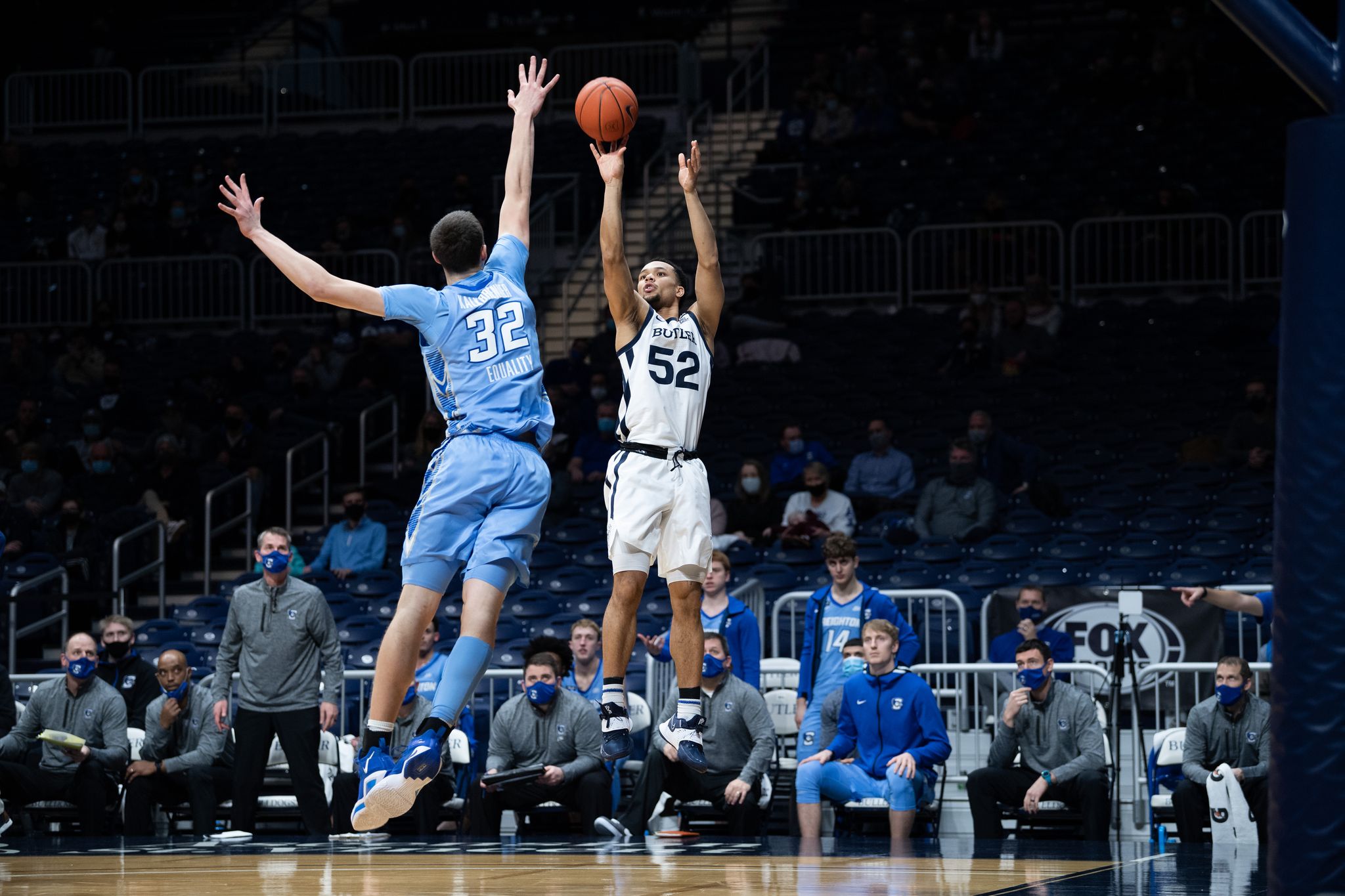 Jair Bolden shoots a 3-pointer in Butler’s upset win over Creighton earlier this season. The Bulldogs shot 34 percent as a team in the loss at UConn on Jan. 26. Photo by Zach Bolinger.

In search of the team’s first three-game winning streak of the season, the Butler men’s basketball team scored a season-low 51 points in the 12-point loss at UConn. In such a struggling game offensively, Bryce Golden stood out as the junior recorded a career-high 19 points, while knocking down 5-of-7 3-pointers. We go beyond the box score in Butler’s first loss in two weeks.

Who could have guessed this performance was coming from Bryce Golden? Through the Bulldogs’ first 12 games, Golden struggled to a 1-of-18 clip from beyond the 3-point line. In Tuesday night’s game against UConn, the junior forward popped off for a career-high five 3-pointers on just seven attempts. While Butler fans have always known Golden is a capable shooter from deep — he made 11 3-pointers last year — but this performance was unprecedented.

While Butler’s offense otherwise was oftentimes hard to watch against the Huskies, this can still be a point of hope for the team. While the Bulldogs have struggled to find a consistent go-to leading scorer, getting Golden back on track will help get the rest of the offense on a better note. If Golden can continue to stretch the defense, that only creates more room for Bryce Nze to maneuver on the inside and more lanes through which Aaron Thompson can drive.

No Butler who shot the ball more than twice shot over 50 percent against UConn. Even worse, some of Butler senior leaders had some of their worst shooting nights of their careers. Nze was 1-of-11, Jair Bolden shot 3-for-12. Even though Chuck Harris only managed to make one shot, the more concerning part was that he only got up four shots in 23 minutes of play. This group has had games where they look like one cohesive team and others where they look like they are a collection of individuals. Unfortunately for coach LaVall Jordan, this game was more of the latter.

We came into this season knowing that scoring the basketball was going to be one of this team’s biggest challenges this season. Butler has only reached 70 points in one game this month and likely would not have reached it at all if they had not taken Creighton to overtime. However, as seen in previous iterations of Butler basketball, scoring may not always be a priority so long as the teams keeps possessions low and plays stingy defense. The Bulldogs did a good job in not committing turnovers — 8 — and getting offensive rebounds —- also 8 —- but giving up 50 percent shooting from the opposition sunk Butler in their first trip to Gampel Pavilion.

3. Bulldogs running out of opportunities to make a run for postseason

After the Creighton and DePaul wins, some circles closest to Butler basketball began wondering if the team was going to be able to turn the tide and make a shot at the postseason. With still many Big East games and a conference tournament left to play, one cannot help but feel this was a monumental opportunity for Butler to jump into the conversation of a top-half team in the league. Thankfully for Butler, the conference provides nearly endless opportunities to get quality wins and that doesn’t change when archrival Xavier comes to Hinkle on Jan. 29.

No matter how good a team is, there will be certain games where it doesn’t feel like the team has ‘it’ on that particular night. The Bulldogs felt that way against St. John’s two weeks ago and again on Tuesday against UConn. While Butler remained competitive in the opening minutes, the Huskies went on a big run and even when the Bulldogs pulled the game to within 10, it never really seemed like there was a fighting chance to pull off the comeback. Don’t expect a similar lack of intensity against the Musketeers.