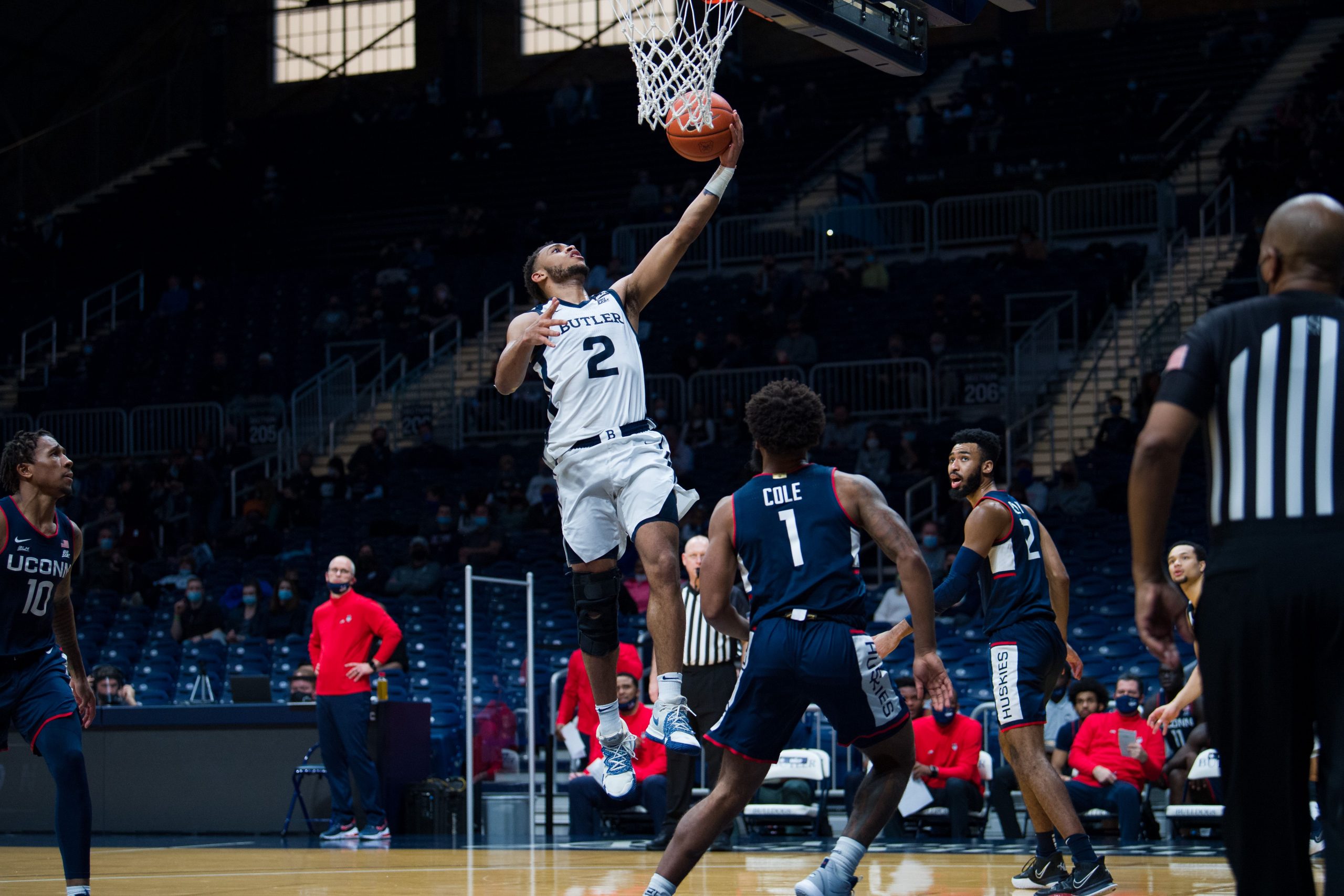 Aaron Thompson drives to the rim in Butler’s 72-60 loss at home against UConn on Jan. 9. Thompson recorded 14 points and six assists in the effort. Photo by Zach Bolinger.

After splitting a pair of home games against Georgetown and UConn last week, the Butler men’s basketball team stands tied for seventh in the Big East. The 3-6 Bulldogs travel to Queens, New York, to take on St. John’s in a conference battle. The Red Storm currently ranks tied for ninth in conference with a 1-5 record in league play. Mike Anderson’s group is coming off a 18-point drubbing at Creighton on Jan. 9. Here’s what you need to know before Butler heads to New York.

1. This is the fastest-paced team Butler has played all season

The majority of Big East teams play a slow, grind-it-out style of offense that emphasizes controlling the game’s tempo. Butler aligns with this basketball philosophy, evident in ranking in the top 40 in the nation, only committing 11.1 turnovers per game through nine games. That style of play will be tested on Tuesday night as St. John’s plays with the 12th-fastest tempo in the country, per kenpom.com. Butler has played one other team that ranked in the top 100 in tempo, when they played their style of basketball and limited Georgetown to under 60 points at Hinkle Fieldhouse less than a week ago.

The Red Storm have scored or allowed over 90 points in four out of six Big East games so far this year, while Butler has only allowed one team to score more than 80 points this season. The Bulldogs’ season-high in points scored was the 73 points they scored in their loss to Southern Illinois on Dec. 21. St. John’s relies on speeding up the game, evident in their 10.2 steals per game, good for 6th in the country. However, there are two sides of the coin in playing in this chaotic fashion. The Red Storm have allowed a whopping 86.2 points per game in conference play off 49.1 percent shooting from the field; each are dead last in the conference.

2. Julian Champagnie is quietly a star in the Big East

When discussing the best players in the Big East, names like Jeremiah Robinson-Earl, Marcus Zegarowski and David Duke understandably come up. However, the conference leader in points scored per game is none other than St. Johns’ Julian Champagnie. The 6’8 sophomore is coming into Tuesday’s contest averaging 21.0 points per game off a league-leading 7.4 made field goals per game. While these numbers are undoubtedly inflated by the Red Storm’s style of play, there is no second-guessing the Brooklyn native’s talent. Champagnie really started coming on late in his freshman season, scoring a season-high 23 points in the loss at Hinkle Fieldhouse this past March, but has picked up where he left off. St. John’s leader has five 20-point games through 10 games, including a 33-point outburst in their most recent game against Creighton. Champagnie does more than score, though, as he is top-5 in rebounds in the Big East as well, securing 7.9 boards per contest.

Of all things, Champagnie’s 6’8 frame may be Butler’s biggest challenge heading into the showdown in New York. The Bulldogs have struggled to contain players who create mismatch problems for them defensively. Jeremiah Robinson-Earl, Sandro Mamukelashvili and David Duke have all had their way with the Butler defense this year, leading to a win for their respective teams. If the Bulldogs can dictate tempo, St. John’s will be sure to turn the ball over and will show their uncomfortability in playing that style. However, if this game becomes a track meet, Champagnie and company may run away from this short-handed Butler squad.

3. These are two very evenly-matched teams

Aside from being just separated by a single game in the Big East standings, Butler and St. John’s have proven so far this season to be evenly-matched on paper this year. The Bulldogs find themselves at No. 88 nationally on Ken Pomeroy’s rankings, while St. John’s is just two spots away at No. 90. Both teams defeated Georgetown at home and falling by single digits on the road at Seton Hall.

Despite so much parity in college basketball, Butler has not found itself in many close games this season. The Bulldogs closed out Western Michigan, Providence and Georgetown down the stretch but the team was down double digits in the second half in each of their losses so far this year. This young Butler team would gain valuable experience in a close game for 40 minutes in what should be a tight game in Queens on Tuesday night,