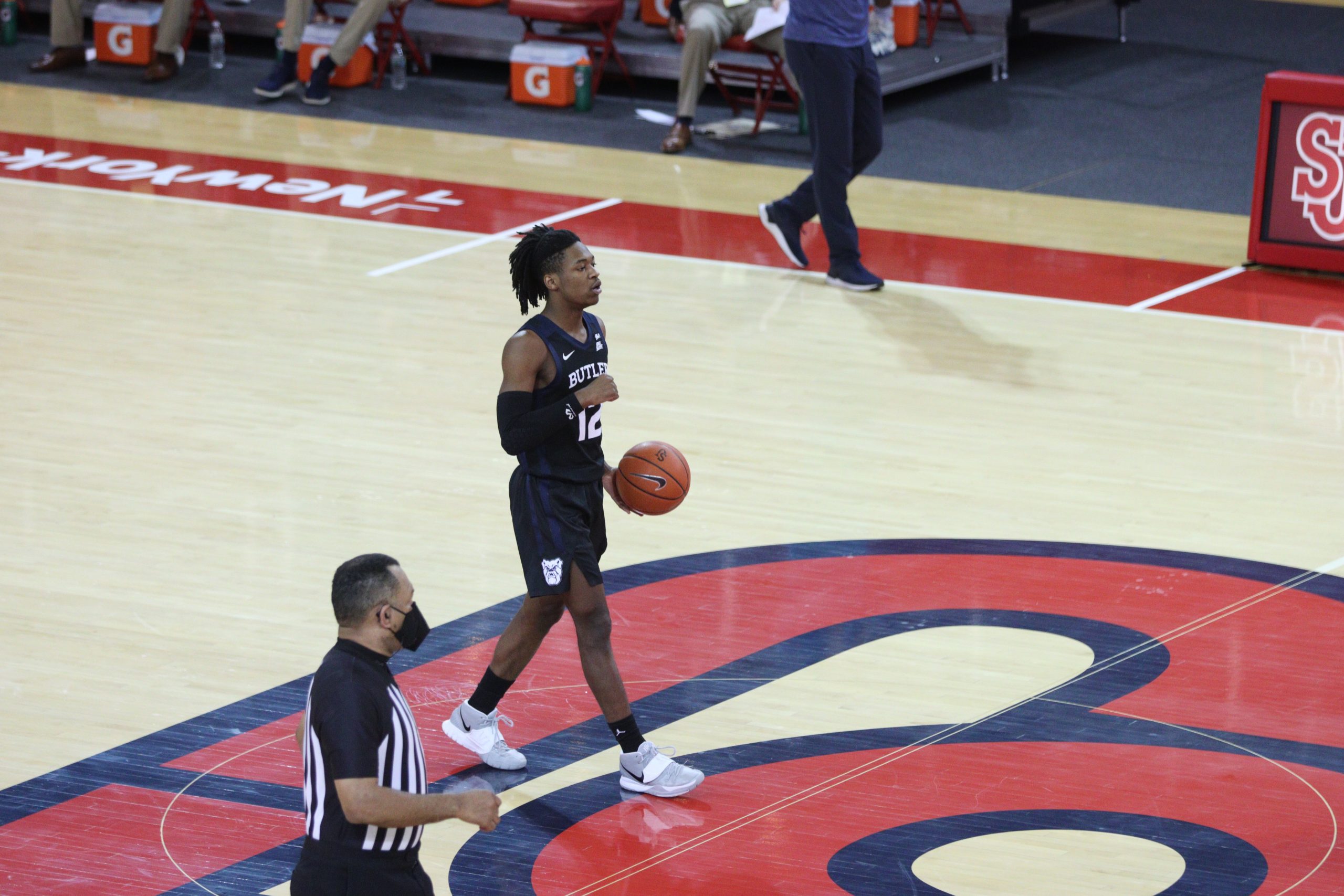 Myles Tate brings the ball up the court in Butler’s 69-57 loss at St. John’s on Jan. 12. Tate played in all 40 minutes of the game versus the Red Storm. Photo by Xan Korman.

After falling behind 12 points quickly into the second half, the Butler men’s basketball team battled back but fell short on the road to St. John’s, 69-57. Chuck Harris was ruled out just before tipoff with a bone bruise on his knee sustained in the UConn loss. Jair Bolden led the Bulldogs with 17 points with five 3-pointers. We go beyond the box score of a tough Butler loss.

In the opening minutes of the first half, Butler played the style St. John’s wanted to play this game: fast. And surprisingly, the Bulldogs held their own despite playing a vastly different tempo than they are used to; all while losing yet another key rotation player. The Red Storm sprinted out of the gate, but the Bulldogs were right at their heels as the score read 23-20 St. John’s just 11 minutes into the game. However, as has been their Achilles’ heel in most of their losses this year, Butler’s opponent went on a big run in the latter 10 minutes of the opening frame to change the complexion of the entire game.

The Johnnies blitzed Butler to the tune of a 7-0 run in the final 2:35 of the first half after the Bulldogs had cut the St. John’s deficit to a single point. While Butler played well in spurts in the second half, the hole they dug for themselves proved to be a burden from which they could not recover. Whether its coaching, lack of execution or focus or the personnel on the floor late in the first half, Butler cannot expect to come back from double-digits in the second half of every game given the Bulldogs’ limited abilities to put the ball in the basket.

2. Aaron Thompson is the key to the Bulldogs’ engine

To any that claim that Aaron Thompson is the most important player on this team for continued success, look no further than this game. Despite struggling with uncharacteristic turnovers early, Thompson regained form in the second half, leading the late Bulldogs charge that got the deficit down to as close to 55-51 with nine minutes remaining in the game. However, as this season would have it, Thompson picked up a costly fourth foul on a questionable call in the following possession, forcing the four-year starter to take a seat. The Red Storm promptly went on a 10-1 run to push the lead out of reach once and for all.

As frustrating as a season it must be for Thompson and the rest of the team this year, he must stay out of foul trouble for any hopes that the Bulldogs finished ahead of their 8th-place picking by Big East coaches in the preseason. Thompson found double-digits in the scoring column yet again this year, his fourth in five games played this year. Considering Chuck Harris’ condition is unknown for the immediate future, Thompson’s presence in the backcourt will be felt more now than ever. As the senior leader of this struggling team, look for Thompson to motivate the group before No. 6 Creighton rolls into town on Saturday.

3. Injuries are piling high in an already tough season

Is this the most unlucky a Butler team has been in some time? It could very well be. Christian David still has not seen the floor since tearing his ACL nearly a full year ago at this point in the season. Scooby Johnson succumbed to a season-ending injury during the offseason. Thompson missed a handful of games earlier this year due to a knee injury, joined by JaKobe Coles and Harris as players who have been sidelined by injury. Now, another starter was shaken up in game action as Bryce Golden rolled his foot late against the Johnnies and will be evaluated upon the team’s return to Indianapolis. Despite all of these setbacks, head coach LaVall Jordan would not allow for any excuses as to why the Bulldogs are 3-7 on the season. Butler fans have seen more early action from young players in a long time, allowing players to get experience ahead of assumed better seasons ahead. While it’s not time to throw in the towel on this season just yet, it’s becoming more and more evident that Butler is facing a stacked deck this season.

A loss to a team that routinely finds itself in the bottom of the Big East is never a good feeling. However, take this as your weekly reminder that the Big East is a complete conference, an unrelenting 20 games for even the best teams in college basketball. The struggling offense is a discouraging sign as the Bulldogs have failed to reach 61 points in their last five games. With an offensive juggernaut marching into Hinkle Fieldhouse on Jan. 16, temper expectations for this young group against a team that is far more prepared for a deep run in the NCAA Tournament,