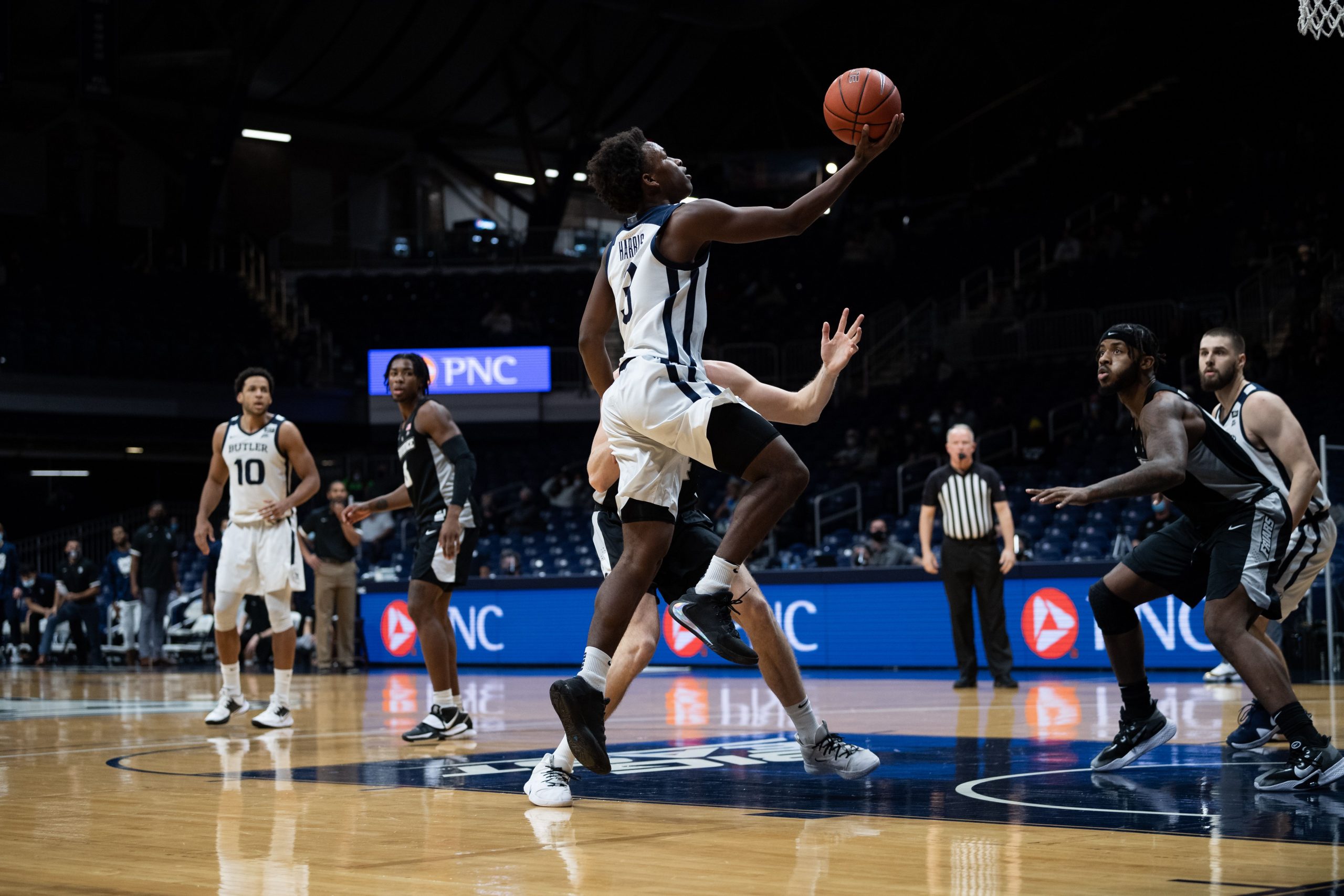 Chuck Harris drives to the rim in Butler’s win over Providence earlier this month. The D.C. native is averaging 11.1 points per game off 42 percent shooting from deep to pair with 2.4 assists per game. Photo by Zach Bolinger.

After suffering losses versus Providence and Seton Hall on the road to fall to 2-5 on the season, the Butler men’s basketball team finds itself with a 1-3 record in the Big East a fifth of the way through the conference schedule in the 2020-21 season.

The Bulldogs will look to improve that mark and avoid losing six of their first eight games for the first time since the 1992-93 campaign as they return to Hinkle Fieldhouse to host the Georgetown Hoyas. Here’s what you need to know heading into the matchup:

1. Georgetown will come in hungry after a very disappointing loss

The Hoyas looked to be hitting on all cylinders through the first 21 minutes on Jan. 2 against Marquette, leading by as much as 18 points after a Qudus Wahab jumper that put Georgetown in front, 38-20. By the description in the headline, one can tell that Patrick Ewing’s group did not play at the same level for the remainder of the game. The Golden Eagles sprinted to an 18-4 run over the span of six minutes of the second half, running away from D.C. with a miracle 64-60 win.

As in any other game, it is crucial for the Bulldogs to keep their composure throughout the inevitable struggles in a 40-minute game. As of late, Butler has struggled in the latter ten minutes of the first half, leaving them in a large hole that is difficult to overcome no matter how good they play. Even if Georgetown jumps out to a double-digit lead, don’t be surprised if the score is much closer by the final buzzer.

2. The Hoyas plays at a pace that is foreign to Butler this season

Through seven games this season, the Bulldogs have yet to play an opponent that plays at a pace higher than top-200 in the country, per kenpom.com. So far, this has aligned with the slow-paced and short-handed Butler team’s playstyle. However, Georgetown ranks in the top 80 in the country in adjusted tempo through their nine games this year.

Wednesday night’s game will largely be in the balance of who can control the pace of play. With JaKobe Coles out for the next three weeks and Aaron Thompson possibly missing yet another game with a knee sprain, Butler will fight to play long possessions to keep players fresh.

With Georgetown’s elevated pace, one may expect an increase in turnovers forced on their opponents, but that hasn’t proven to be the case so far this year. Hoya opponents are averaging just 10.6 turnovers per game this year, good for 14th fewest in the country. For a Bulldog team that takes care of the ball already, the end result will likely come down to if LaVall Jordan’s bunch can knock down shots on their home floor.

Of all the great things Kamar Baldwin accomplished in a Butler uniform, it is absolutely shocking to realize that that list of feats does not include defeating Georgetown at home in Hinkle Fieldhouse. The Hoyas — far from the Big East giant they were in decades past — have not lost on the road at Butler since February 2016.

Ironically, Mac McClung was inactive for both games he could have played in Hinkle, but it didn’t matter. John Thompson III was head coach of this Georgetown program the last time the Bulldogs ran to the locker room victorious against this group. The likes of Chuck Harris, Myles Tate and co. will look to end the streak that started when they were still in middle school.