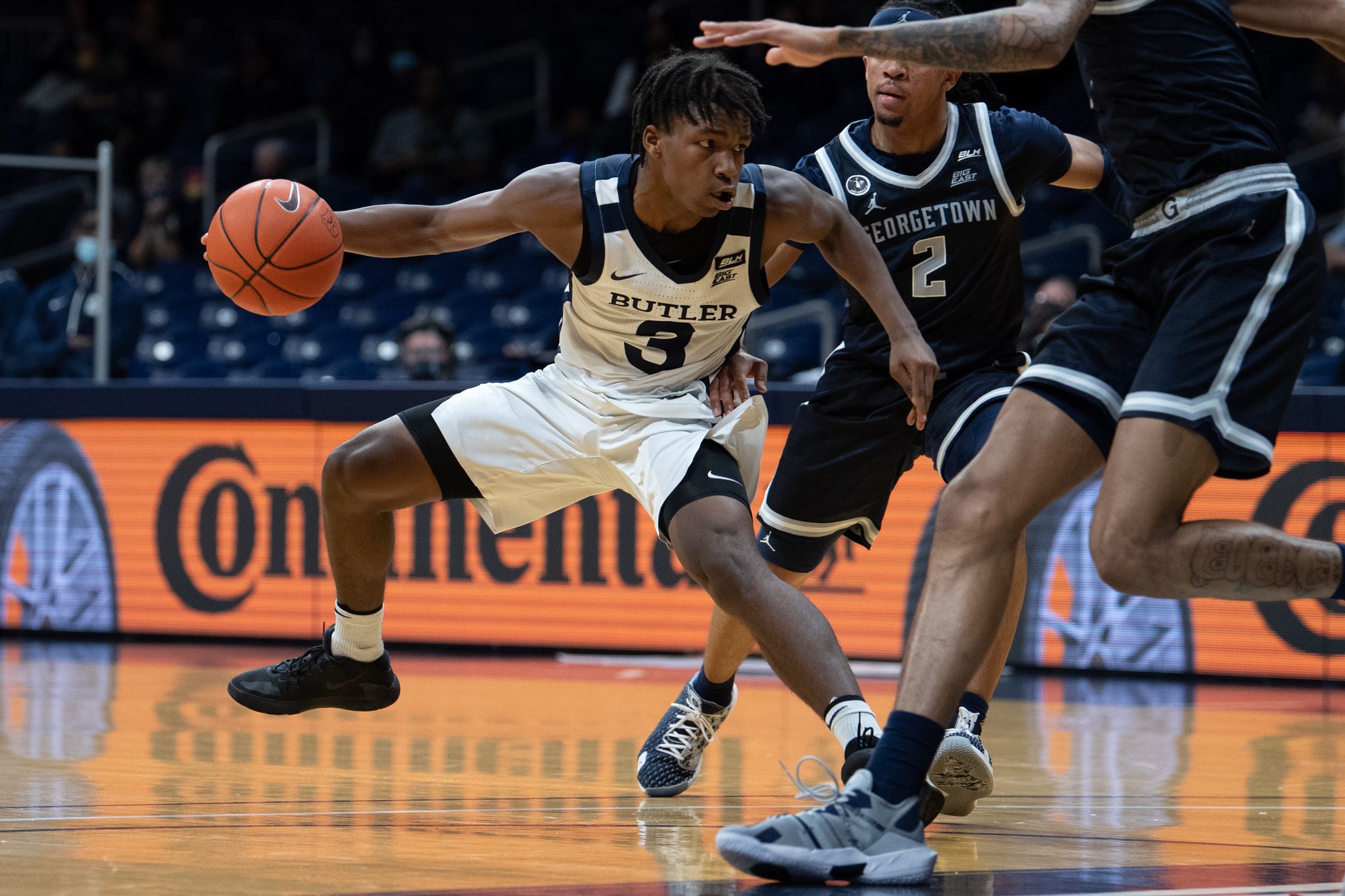 Chuck Harris poured in a game-high 18 points including four 3-pointers in Butler’s 63-55 win over Georgetown in Hinkle Fieldhouse. Harris has scored in double figures in six of the last seven games. Photo by Zach Bolinger.

Chuck Harris connected on a career-high four 3-pointers, the Bulldogs avoided their first 2-6 start in 27 years and the team improved to 2-0 at home in conference play in a 63-55 win over Georgetown. Butler limited the Hoyas to just 21 points in the second half to earn their first win of the calendar year. We go beyond the box score in the come-from-behind win.

1. Georgetown came out swinging in the first half, but Butler weathered the storm

The Hoyas have developed a reputation around the country as a team that jumps out to first-half leads even against the best opponents on their schedule. Georgetown led at the break versus the likes of West Virginia, Villanova and Marquette. Patrick Ewing’s group enjoyed similar success in the first half at Hinkle on Wednesday night, connecting on six 3-pointers and limiting the Bulldogs to just 34 percent shooting from the field. However, like the three games mentioned previously, the Hoyas coughed up their lead in the final 20 minutes. Georgetown scored just four points in the final nine minutes of the second half, scoring a disappointing 21 for the frame.

The other key for the Hoyas through the first 30 minutes of the game was their ability to score off second chances. The length of Qudus Wahab and Jamorko Pickett really got to Butler’s defense, which had been pretty efficient at securing defensive rebounds up until tonight. However, in the second half, the Bulldog offense was able to score enough baskets to slow down the quick-tempo attack of Georgetown, leading to more half-court offense for the Hoyas, which played right into Butler’s hands. Markeese Hastings was a player that had not an abundance of opportunities in a Butler uniform, but made the most of them on Wednesday. Despite registering just four points, Hastings grabbed a career-high seven rebounds and played excellent defense for a Butler team that is very short-handed at forward. While the Bulldogs have yet to put together a full 40-minute performance this season, their ability to compete in the second half of games is an encouraging sign for such a young group.

2. Butler’s leadership carried them in a tight second half

In a season where fans and journalists alike have talked about the freshmen for this Butler team all night long,  the senior Bulldogs proved once again that college basketball is governed by its experienced players. Unless you’ve lived under a rock for the last month, you know that Aaron Thompson has been out since the Villanova game with a sprained ligament in his right knee. While his absence has allowed freshmen guards Chuck Harris and Myles Tate to flash their potential, it has put a hefty strain on the Bulldogs’ offense. Thompson returned from injury on Wednesday night and he, along with fellow senior Bryce Nze, willed Butler to the win in the closing minutes. Despite his struggles down the field, the Butler offense ran through Nze at critical moments in the second half, as the senior forward finished with 10 points despite fighting through foul trouble.

Aaron Thompson, though, proved yet again that he is the straw that stirs the Butler drink. In crucial possessions down the stretch, Coach LaVall Jordan and staff felt infinitely more comfortable that the ball would be in the hands of such an experienced and measured player. His turnaround floater at the end of the shot clock was a devastating blow to a Georgetown team that was looking for a break. The Hoyas’ leading scorer, Jahvon Blair, was held to just 12 points on the night despite averaging 19 on the season. Who guarded him? Aaron Thompson.

3. Chuck Harris is a star, and he’s here now

If you’re just now getting around to learning that Chuck Harris is a future star in the making in Hinkle Fieldhouse, you are well behind the rest of us. After scoring a career-high 22 points in the loss at Southern Illinois, Harris earned Big East Freshman of the Week honors and wasn’t done impressing. With Harris’ game-high 18 points in Wednesday night’s win, he has scored in double figures in six of his last seven games. Coincidence or not, Butler’s last No. 3 — Kamar Baldwin — found confidence in a similar stretch of Big East games in 2017 when the then-freshman guard notched double figures in seven of eight games. Had Harris scored two more points against Georgetown, it would have been his second-career 20-point game in just his eighth-career collegiate appearance. For reference, Baldwin’s second-career 20-point game came as a sophomore in his 48th career game. The young guard is knocking down 43 percent of his shots from the field and connecting on an even more impressive 44 percent from 3-point land. Harris also boasts a 2:1 assist-to-turnover ratio, while not giving the ball up once against the Hoyas.

Along with Myles Tate, Harris is proving night in and night out that he is no flash in the pan for this Butler program. As those guards gain more experience and gain a report playing with each other, the sky is the limit for what they can accomplish as individuals and as a team. Don’t say you weren’t notified.

While it’s only January, the prospects of Butler recreating their team success from 2019-20 look slim to none. The Big East looks to be yet again one of the strongest conferences in the country with loads of experienced players with professional futures ahead of them. While the Bulldogs very well may finish at their pre-season ranking — 8th — by the time March Madness meets Hinkle Fieldhouse, Butler is getting invaluable on-the-job training as a young team. While this Georgetown team isn’t world beaters by any stretch, the Hoyas were riding a four-game winning streak in Hinkle Fieldhouse. While Butler fans may look to the future — with good reason — team 123 isn’t giving up on the ‘21 campaign any time soon.