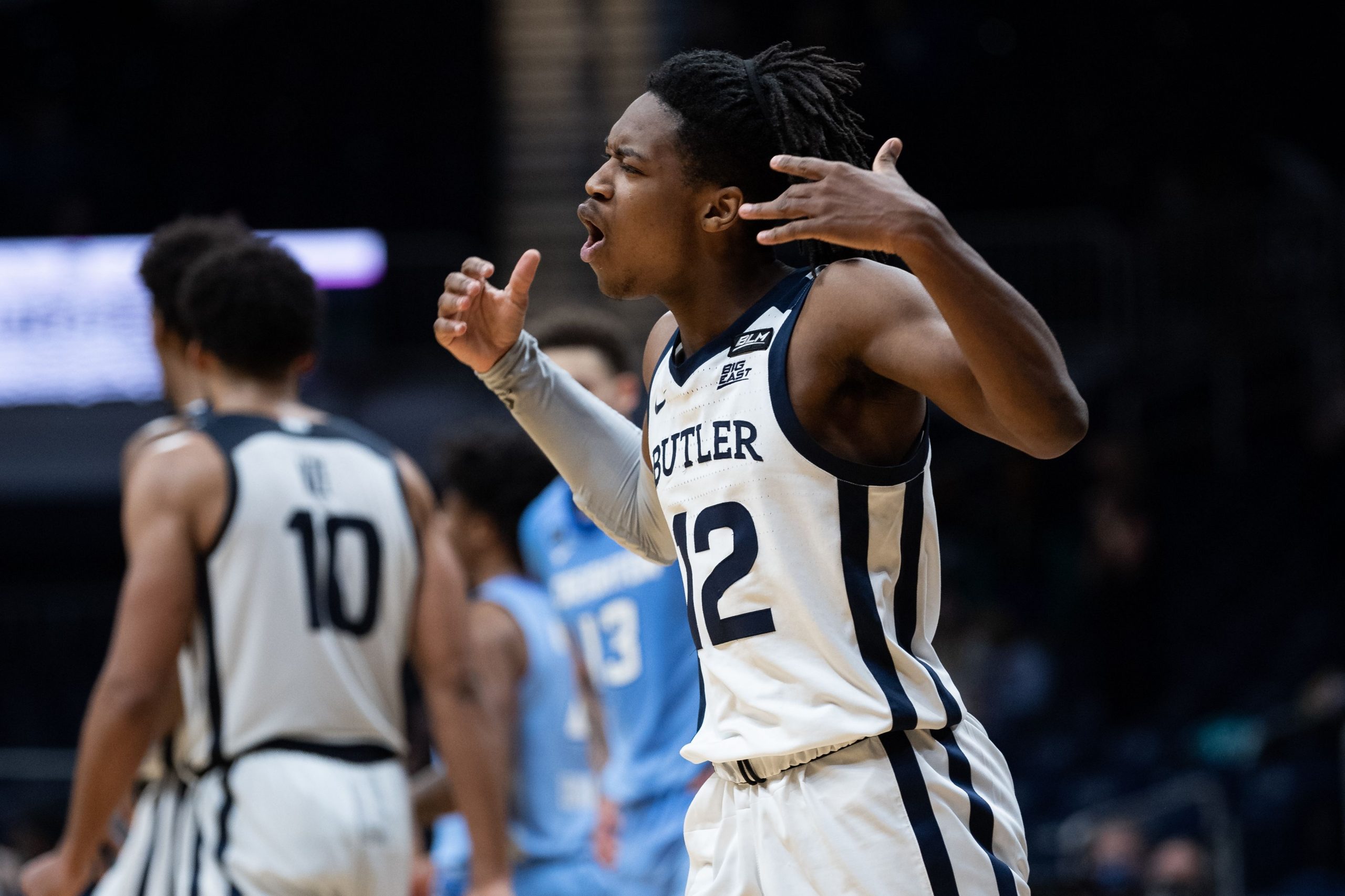 Butler’s Myles Tate celebrates after a big play in the Bulldogs’ 70-66 overtime victory over No. 8 Creighton on Jan. 16. The Bulldogs take to the road on Jan. 19 to face the DePaul Blue Demons. Photo by Zach Bolinger.

The Butler men’s basketball team will search for their first winning streak of the season against the DePaul Blue Demons on Jan. 19. Despite not yet winning in conference play this season, DePaul took Providence to double overtime on Dec. 27 and is coming off an 18-point victory over Valparaiso on Jan. 16. Here’s what you need to know as Butler tries to avenge last year’s Blue Demon upset against the then-No. 5 Bulldogs.

1. These are starkly different teams

Other than being two Big East teams from the Midwest, there is not much in common between the way Butler and DePaul play. The Blue Demons play with a top-30 pace in the country, resulting in a league-leading 18.3 turnovers per game in conference, giving up the second-most points in Big East play at 78.3 points allowed per game and sending their opponent to the free throw line a league-worst 24.8 times per game. None of those stats are going to result to many wins in a conference as good as the Big East, justifying DePaul’s 0-4 start in conference play.

The Bulldogs, on the other hand, play at a grinder’s pace, playing methodically and relying on their defense and avoiding getting into a shootout. Butler put this style of play to great use, mucking up Creighton’s top-10 nationally rated offense to just 25 points in the first half and 66 points in 45 minutes. Like games earlier this season against Georgetown and St. John’s the key for LaVall Jordan and company will be to control the tempo and play in a way in which Butler can succeed.

Despite the Blue Demon’s frantic pace, the team has woefully come up short in terms of getting the ball in the basket efficiently. DePaul has successfully scored more than 30 points in a half just twice this season — in the second half in single-digit losses at Providence and versus Seton Hall. If Butler can frustrate the Blue Demons on the defensive end like they did against Creighton, they have a good chance of walking out with their first road victory of the season.

The Bulldogs will certainly be pleased to not have to see Paul Reed in this year’s matchup at Wintrust Arena. Reed, who would later hear his name selected in the 2020 NBA Draft, diced the Butler defense for 23 points while missing just one of nine shots in the Blue Demons’ upset victory over the then-No. 5 ranked team in the country. While Reed is no longer on opposing the Bulldogs, DePaul still has capable scorers who can put up a big spot in a Big East game. Charlie Moore is the leading candidate for one of such games as the Preseason All-Big East First Team selection averaged 15.5 points per game a season ago, even ahead of Reed. With shooting averages under 40 percent both from the field and behind the 3-point line, Moore was a good pick to break out this year.

Unfortunately for Dave Leitao’s group, Moore has not taken that next step as the go-to guy for the Blue Demons. Moore’s scoring average has dipped to 13.2 points per game while the other areas of his game haven’t been inspiring either — Moore has averaged 1.3 less assists per game with the same number of turnovers and has seen his steals per game cut in half. While Moore has been far from what DePaul fans could have expected for him this season, he is a sleeping giant waiting to break out. Moore has not led the team in scoring in any Big East game this season, and the Bulldogs would not like for Tuesday’s matchup to be the game where he gets right.

3. Butler goes from being the hunter to the hunted

It’s not a stretch to think teams in the Big East pay attention to the other games that go on in their league. Butler came into their Jan. 16 game against No. 8 Creighton as heavy underdogs even without Marcus Zegarowski, the Big East Preseason Player of the Year. Telling by the way Butler came out energized for that game, it’s easy to think the Bulldogs had circled that game on their calendar for quite some time. A young, hungry team licking their wounds from decisive losses earlier in the week picked off a team that was riding in high on a six-game winning streak. It’s part of the reason many college basketball fans consider the sport to be superior to other sports — because a team can win in any given game. However, if Butler is not careful on Tuesday, the roles could very well be reversed.

DePaul will enter the contest without a Big East win on their record. Considering all the other Big East teams notched a conference win before the New Year, DePaul has been looking for a spot to get off the schneid. Butler has been in this position many times this year, falling behind by double digits in all but two of their games this season. This will be one of the few games since the season began that the Bulldogs may have a target on their back. If Butler comes in with a lack of focus coming off of a monumental upset win, the Blue Demons are ripe for the picking to change their winless record in the Big East conference.