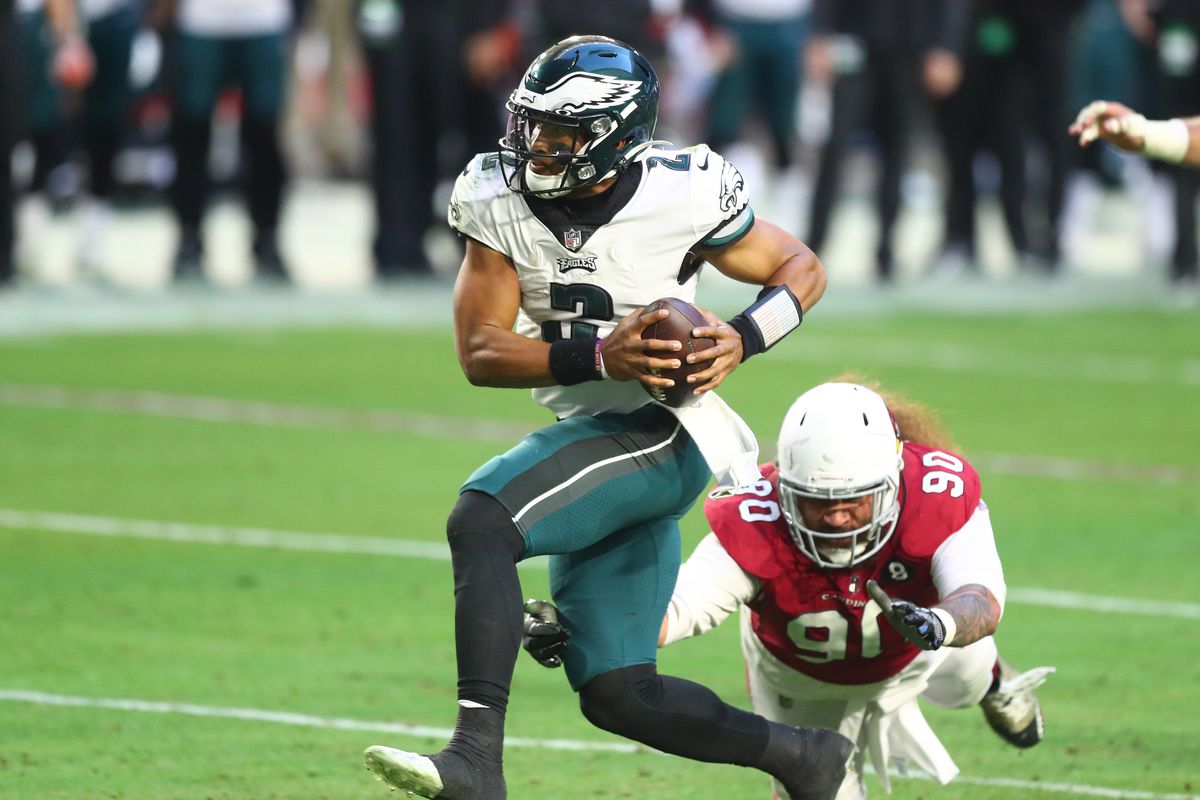 Jalen Hurts avoid Arizona defenders in the Eagles’ loss last week to the Cardinals. While Hurts has played extremely well these last two weeks, he now seems to be the future in Philadelphia. Photo by USA Today.

After 16 weeks of long, hard-fought matchups, for most traditional leagues, it is finally time for the fantasy football championships. From the great waiver pickups like James Robinson and Antonio Gibson to stand out players like Derrick Henry and Tyreek Hill, it all comes down to one final matchup between two of the best fantasy managers in their fantasy leagues.

For fantasy managers, their decisions that they make this week will either haunt them for the rest of their lives or lead them to fantasy glory. Here are the key players to start and sit for Week 16 of the NFL season.

Jalen Hurts, Philadelphia Eagles. A Carson Wentz-less Eagles offense has looked surprisingly better than expected. In his second start for the Eagles against the Cardinals, Hurts threw for 338 yards and three touchdowns as well as 63 rushing yards and a rushing touchdown. This type of production is usually unheard of for rookie quarterbacks especially in just their second start, but Hurts has turned out to be a whole different breed. This week, the Hurts will look to continue his streak against a Cowboys defense that ranks 9th in most total yards allowed in the league. Hurts is now the future of the Eagles offense, and he will attempt to prove that against another great matchup in the Cowboys.

Philip Rivers, Indianapolis Colts. As much as many fans want to keep saying the Colts are one quarterback away from being championship contenders, they are forgetting how well Rivers has been playing as of late. In his last three games, Rivers has thrown for six touchdowns and zero interceptions. The only issue is this week the Colts are up against the big, bad Steelers defense who have given up the second least passing yards per game. Rivers has some potential down the stretch, but this week’s matchup is enough to leave him on the bench.

David Montogmery, Chicago Bears. With Matt Nagy no longer calling the offense for the Bears, Montgomery has finally found his stride. In his last four games, Montgomery has racked up 434 yards, 137 receiving yards and six touchdowns. Montgomery has turned out to be a league-winner for any fantasy manager who has him on their roster. For this week, the Bears will be up against a Jaguars defense that has allowed the most total yards in the entire league. Montgomery’s four-game hot streak will likely become a five-game streak in another favorable matchup against Jacksonville.

Wayne Gallman, New York Giants. Gallman’s five seconds of fame in the Giants’ offense are now over. After Gallman came out of nowhere and tore through opposing defense, he disappeared as fast as he appeared. Over the last five weeks, Gallman averaged 16.8 carries and 81.4 yards per game, but in last week’s game, Gallman only had nine rushes for 29 yards the entire game. Gallman’s production has seemed to take a major dip at the most important time of the year. This week, the Giants will be up against a Ravens defense that allows the 10th-least rushing yards per game. Since Gallman has struggled to get any sort of a run game going, it isn’t worth taking another risk in starting him.

Robert Woods, Los Angeles Rams. The winless Jets are no more thanks to the Los Angeles Rams. Just when fans thought that the Rams might be a legitimate championship contender, they went out and got beat by the Jets. While the Rams loss was very embarrassing, fantasy managers are still pleased with Woods’ production. Woods was able to put up six catches for 86 yards and a touchdown as well one rush for 40 yards. With Woods being the only bright spot of the Rams offense last Sunday, it is expected the Rams will continue to rely on Woods success to get back on track against the Seahawks’ defense that yields a league-leading 293 receiving yards per game this week. Woods has the potential to have another breakout game against a poor Seahawks secondary.

Diontae Johnson, Pittsburgh Steelers. The Steelers went from being undefeated to losing three games in a row. Most recently, the Steelers not only lost to the Bengals, but lost to them in a primetime game on Monday. This means everyone got to witness the exposing of the Steelers as an imposter of a successful team. As for Johnson, he has been one of the bright spots on the Steelers’ offense. Johnson has scored double-digit fantasy points in six of his last seven games due to his recent increase in targets. While the Steelers offense has relied heavily on Johnson to carry the offense week in and out, they will have to find different options this week against a Colts defense that has yielded the seventh-least total yards in the league. Fantasy managers should think twice when deciding to start Johnson this week.

Austin Hooper, Cleveland Browns. For the first time since 2002, the Browns have legitimately played like a playoff contender. Baker Mayfield has made strides in the right direction and their defense has also played surprisingly well. Hooper has also begun to join in on the success that the team has seen with his most recent performance of five catches for 41 yards and a touchdown. While these numbers aren’t league-winner numbers, Hooper will have an extremely favorable matchup this week against the Jets defense that has allowed the third-most receiving yards in the league. Hooper will be a great sleeper for fantasy managers in desperate need of a tight end.

Tyler Eifert, Jacksonville Jaguars. The Jaguars now hold the first pick and the rights to select Trevor Lawerence in the 2021 draft thanks to the Jets winning a meaningless game against the Rams. While the Jaguars future looks a little brighter, there are still two more games left this season for them to play. For Eifert’s sake, he has two more weeks left to struggle. Last week, he was able to bring in three catches for 51 yards against a strong Ravens defense. This week, he will face a similar style of defense in the Bears who held the Vikings tight ends to just three catches for 37 yards. If any fantasy manager has Eifert on their rosters to begin with, it would be smart to keep on the bench.

Will Lutz, For a kicker who is on a team that has only lost three games this season, it would be expected that he would be having just as much success as the team, right? Well, not quite. Lutz has seen a recent slump in production. Despite Drew Brees making his return last week, Lutz has made all of his extra points, but he has also missed all four field goal attempts he has faced in the last three weeks. For fantasy managers getting worried about his reliability going forward, they should take a deep breath. This week, the Saints will be up against a Vikings defense that has allowed the eighth-most points per game in the league

Matt Prater, Detroit Lions. Every year, the Lions start the season out with giving their fans plenty of hope for a successful season, and then, at around the halfway point, everything comes crashing down. For now the Lions are still in the phase of recovering after they were only able to score 25 points against one of the weakest defenses in the league. As long as the offense continues to struggle, Prater will have a harder time scoring a reasonable amount of points in fantasy especially in this week’s matchup against the Buccaneer defense who has yielded the 12th-least points per game in the league. Prater’s value for this week is not worth investing in especially with only two weeks left in the season.

Miami Dolphins Defense. The Brian Flores-led Dolphins defense has been lights out all season long. While the Dolphins give up an average of 358.1 total yards per game, they still lead the league in least amount of points allowed per game as well as the third-best turnover ratio. This should help this week against a Raiders offense that is still deciding between starting Marcus Mariota or Derek Carr, who is coming off a groin injury from last week. Both teams are still fighting for a playoff spot, but regardless of the outcome, the Dolphins defense should still be a solid option at defense.

Denver Broncos Defense. This year is just not the year for the Broncos. After many fans and sports analysts believed the Broncos would have a chance to sneak into a wildcard spot this year, the team has once again disappointed. Last week, Josh Allen and the Bills came to Denver and torched the entire defense for a season-high 44 points. This is not encouraging for any fantasy manager looking for a spare defense especially when this week they will face a Chargers offense that has the seventh-most total yards per game in the league. It is time for not only the Broncos fans but fantasy managers to move on from the Broncos defense this year.