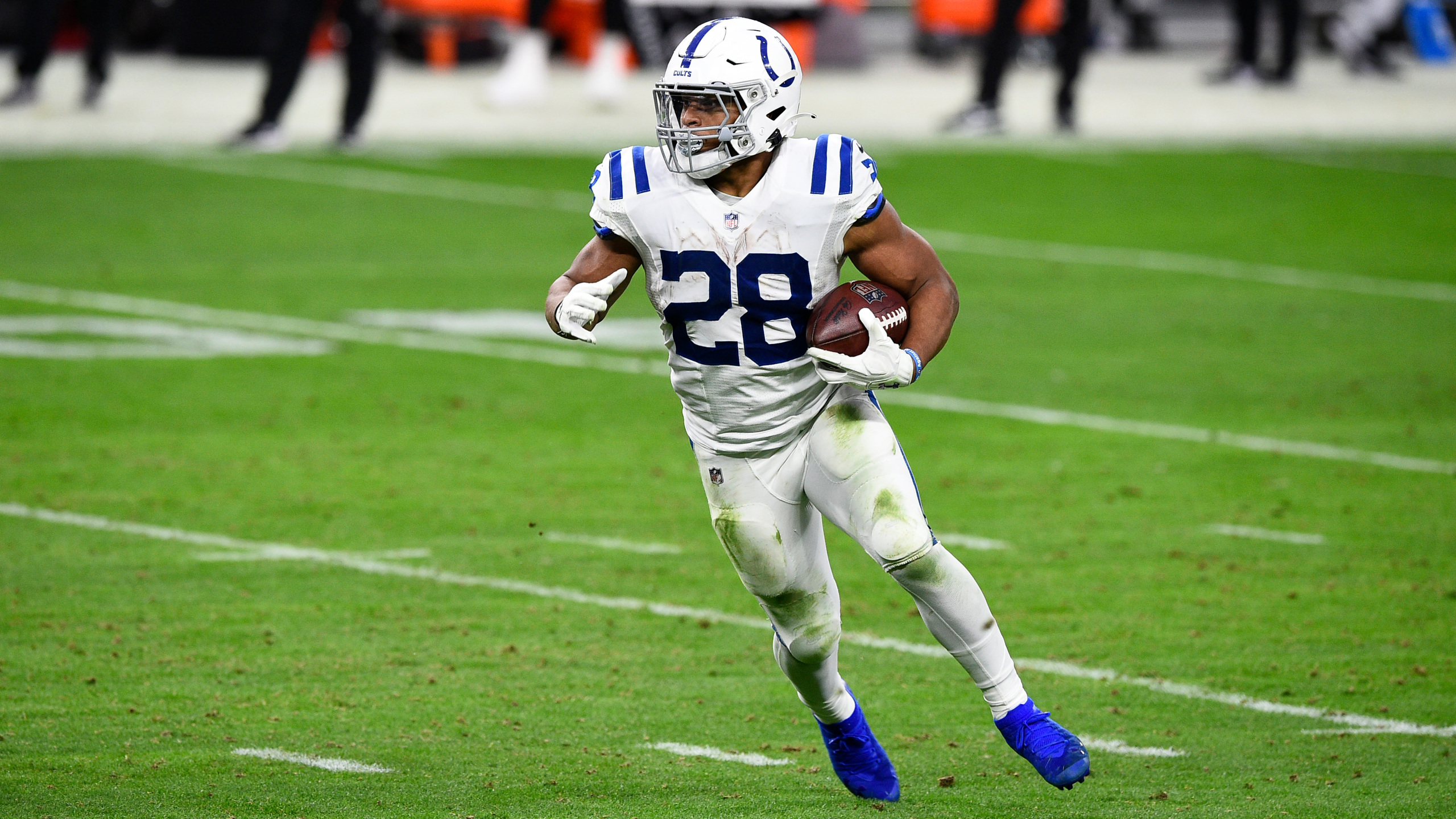 Jonathan Taylor looks for running room against the Las Vegas Raiders last week. Taylor returns with yet another good opportunity for fantasy points against a poor Texans rush defense.

Congrats to all the fantasy managers who survived the first week of the fantasy football playoffs as well as those good enough to be on a bye week! After a thrilling first week of the playoffs filled with plenty of high scoring matchups between teams, it is now time to look forward to next week. With some NFL teams making their final playoff pushes while others like the Falcons and Texans have officially been eliminated, choosing the right player to start this week may be difficult. The decisions each fantasy manager will make could either be league-winners or losers.

The pressure is on, but this list of players is here to provide more insight into the situations for some of the more reliable fantasy players in the league. Here are the key players to start and sit for Week 15 of the NFL season.

Ryan Tannehill, Tennessee Titans. After getting embarrassed against the Browns two weeks ago, the Titans sought to redeem themselves in an easier matchup against the Jaguars. Tannehill and Derrick Henry delivered with an obliteration on offense. Tannehill threw for 212 yards and two touchdowns while Henry matched him by running for 215 yards and two touchdowns. This recent offensive success will likely continue against a Lions defense that has yielded the fourth-most total yards per game in the league. Tannehill’s matchup only makes choosing Tannehill to start this week a smarter option.

Tua Tagovailoa, Miami Dolphins. Tua Time is alive and well in South Beach. In last week’s battle against the Chiefs’ high powered offense, Tua arguably outperformed Patrick Mahomes. Tua and Mahomes threw for more than 300 yards and two touchdowns each, but Mahomes threw three interceptions which was more than he had thrown in one game than the entire season so far. While Tua has looked spectacular as of late, he will have trouble this week against Bill Belicheck and the Patriots. Belichick has a record of 20-5 against rookie quarterbacks with his most recent game being two weeks ago when his defense shut out Justin Herbert and the Chargers offense. Tua’s potential has been on the rise as of late, but Belichick’s defense will be sure to give Tua some nightmares.

Jonathan Taylor, Indianapolis Colts. The Colts played so well against the Raiders last week that the Raiders were forced to fire their defensive coordinator hours after the game. The Colts just simply couldn’t be stopped as they scored 44 points. Taylor contributed to this by running for a career-high 150 yards and two touchdowns. This week, the Colts are back up against the Texans, who they beat just two weeks ago. The Texans are not a team to be feared because they have the second-worst ranked rushing defense in the league. Taylor is ready to feast some more against a Texans defense that has struggled against the run all season long.

Melvin Gordon, Denver Broncos. Gordon has been a bit of a disappointment for fantasy managers this season. After being traded to the Broncos in the offseason, he has only surpassed 100 rushing yards only twice so far this season. In last week’s game against an average Panthers defense, Gordon only ran for 68 yards. Unfortunately for Gordon, he will have a harder time even running for the same amount of yards as he did last week against the Bills’ defense who hasn’t allowed a player to run for 100 or more yards for the past four weeks. Gordon is not the most reliable running back to start especially against a tougher Bills defensive front.

Amari Cooper, Dallas Cowboys. The NFC East is no longer the laughing stock of the league. After starting the season as one of the worst divisions in football, the Cowboys and the rest of the NFC East have begun winning games. As for Cooper, he has been on a three-game streak with a touchdown and at least five receptions. This week, the Cowboys are up against a tougher 49ers defense that ranks the fourth-best in the league. However, since the Cowboys have heavily relied on Cooper to carry the offense, he should have no problem putting similar stats as he did in the last three weeks.

Tyler Boyd, Cincinnati Bengals. The Bengals have gone back to their “Bungal” form. Ever since Joe Burrow went down with a torn ACL in Week 11, the Bengals offense has hit rock-bottom. Last week against the Cowboys defense that had given up the 10th most total yards per game in the league, Boyd was only to bring in five catches for 43 yards. Boyd, who is usually the most reliable wide receiver on the Bengals, was out performed by Tee Higgins and even A.J. Green. This raises many concerns heading into a matchup against the Steelers defense that ranks the second-best against the pass in the league. As long as anyone other than Joe Burrow is running the Bengals offense, fantasy managers should avoid Boyd at all costs.

Logan Thomas, Washington Football Team. As the Washington Football Team has come back from the dead to take the lead in the NFC East division, so has the rise of Thomas as a reliable fantasy tight end. In the last two weeks, Thomas has seen 16 targets, which is four more targets than Terry McLaurin. With Thomas now receiving the bulk of the targets, he will likely have another big role against a Seahawks defense that ranks dead last in passing yards allowed per game. No matter if Alex Smith or Dwayne Haskins is quarterback for Washington, Thomas is sure to continue his hot streak against a weak Seahawks secondary.

Dallas Goedert, Philadelphia Eagles. Carson Wentz has been replaced and the Eagles have once again found a way to win. Rookie Jalen Hurts is now the starting quarterback for the Eagles. In his first game against the Saints, Hurts led an unbelievable upset than nobody could have predicted. While it was great that Hurts was getting all the love, one player has been rather quiet and that player is Goedert. In last week’s game, he only caught four passes for 43 yards. Goedert’s chances to redeem himself will be low this week against a Cardinals defense that has let up the fifth-least points to opposing tight ends this season. The new switch in quarterbacks in Philly could lead to a major drop in Goedert production going forward.

Michael Badgley, Los Angeles Chargers. The “Money Badger” has had a busy season. Excluding the game against the Patriots where the Chargers were shutout, Badgley has had no problem finding opportunities to score points. In last week’s game, he made both his field goal attempts including an additional two extra points made. This week, the Chargers are up against a Raiders defense that has allowed the third-most points per game in the league. Badgley is a solid option for fantasy managers in search for a replacement for their underperforming kickers.

Dan Bailey, Minnesota Vikings. Who knew one player could cost his team 10 total points in an important playoff push game. After hitting the game-winning field goal against the Jaguars last week, Bailey went out and missed all three of his field goals and an extra point. The Vikings are now in trouble as they now have an unreliable kicker headed up against a Bears defense that just held the Texans to just seven points last week. If any fantasy managers still have Bailey on their rosters, it would be smart to seek other options for a kicker who doesn’t miss as often as Bailey did last week.

Los Angeles Rams Defense. The Rams defense is a whole different breed. After a slow start to their season, the Rams have emerged as one of the best defenses in the league. Last week, they held a Patriots team that scored 45 points prior to just three points all game. With Aaron Donald and Jalen Ramsey leading the way, the Rams defense has allowed the third least points in the league. This week, they face a Jets team that is still winless and has the worst offense in total yards per game by around 31 yards. The Rams defense is going to have a field day against a horrendous Jets team that is trying to lose games.

New Orleans Defense. The Saints defense should feel embarrassed after last week’s performance. For the first time in more than three years, the Saints allowed not one but two players to rush for 100 or more yards. The Saints let rookie Jalen Hurts win in his first start ever and Miles Sanders run all over them in a game that should not have been close to begin with. Now, the Saints will have to face Patrick Mahomes and the Chiefs’ offense who rank as the best offense in total yards per game in the league as well as the second-most points scored in the league. Fantasy managers should beware of a Saints defense that will be in for a rough one against a ruthless Chiefs offense.