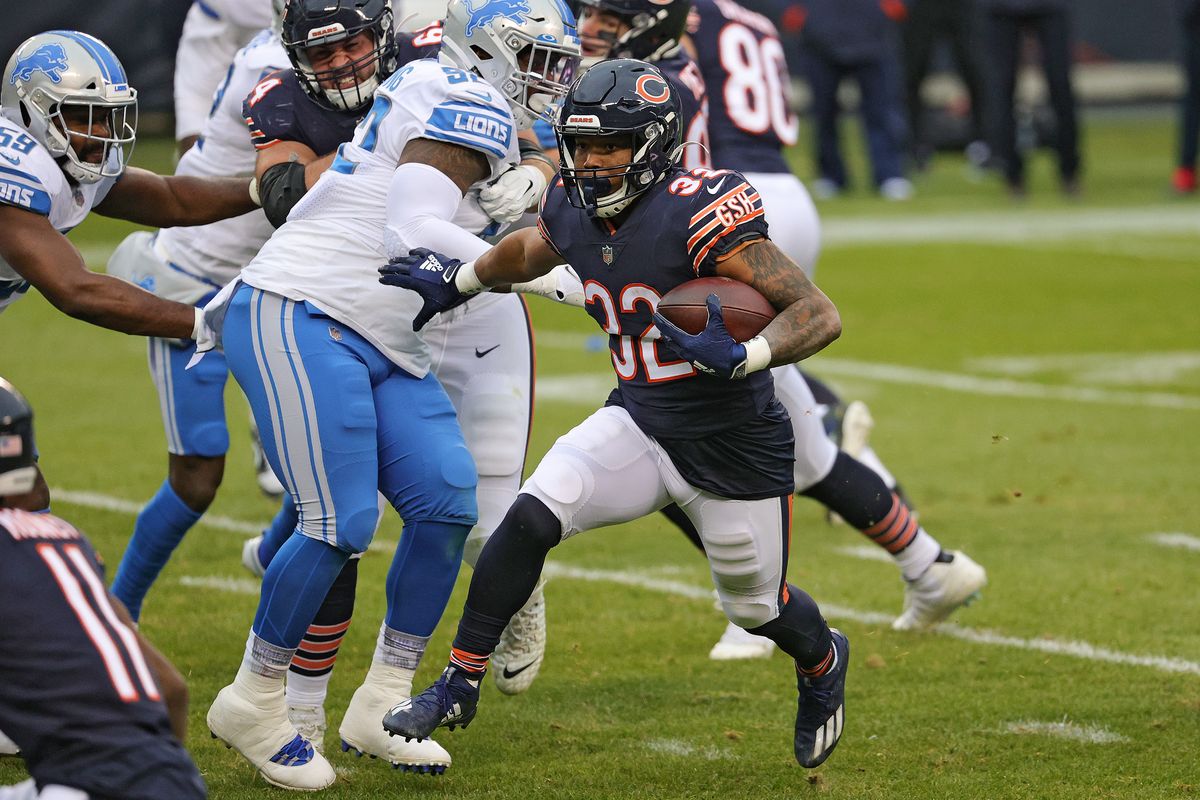 Chicago Bears’ David Montgomery runs to the left in a game against the Detroit Lions last week. Facing a porous Texans’ run defense this week could lead to a big fantasy output for Montgomery in Week 14. Photo by Chicago-Sun Times.

Ladies and gentleman, the fantasy playoffs are here! The last 14 weeks have been a long stretch filled with injuries aplenty, scheduling nightmares and COVID-19 cases everywhere. However, the season still lives on and with it comes the most important three weeks of the year for fantasy football managers.

While some fantasy managers may have earned themselves a bye week for this week, there are still a numerous other managers that still have to play. These managers will be in desperate need of sleeper players that could lead them to a comeback of a lifetime. Here are the key players to start and sit for Week 14 of the NFL season.

Russell Wilson, Seattle Seahawks. Russ forgot how to cook. Wilson went from playing like the MVP of the league to falling off a cliff. In his most recent game against the Giants, Wilson only threw for 263 yards and 1 TD along with a costly interception at the end of the game. Wilson has lost all his hopes of becoming the MVP for the first time in his career. However, Wilson will be able to bounce back against the STILL winless Jets. This game will be the game of the garbage defenses as the Seahawks are ranked the second-worst and the Jets are ranked the fourth-worst in total yards per game allowed in the league. This week, Wilson should be able to find the ingredients needed to redeem himself in the easiest matchup he will face all season long.

Josh Allen, Buffalo Bills. The Bills Mafia’s savior in Allen has lighting it up. Allen has helped revive the Bills passing offense by turning them into the third-highest offense in passing yards per game with 276.4. This Bills team has looked like they could make a long playoff run this year although there is one team that is standing in their way and that is the Steelers. The Steelers defense is ranked in the top three in almost every single defensive category with their most impressive stat being a league leaving 69 sacks. Allen may have been performing great lately, but this week’s matchup is enough to scare fantasy managers out of starting him.

David Montgomery, Chicago Bears. The Bears are awful. There is no way else to describe a team that started off with a 5-1 record and then dropped the next six games. At this point, the Bears are inventing new ways to lose games like in their most recent game against the Lions. Mitchell Trubisky fumbled the ball in their own territory, which led to the eventual game-winning touchdown for the Lions. While the Bears have been nothing but a dumpster fire, there has been one player that has snuck under the radar and that player is Montgomery. The Bears rushing offense has ranked in the bottom of the league, but they have been on their way up with Montgomery running for 175 yards and two touchdowns in his last two games. The Bears will be greeted by the Texans this week which have given up second-most rushing yards per game in the league. Montgomery is a solid sleeper with an incredibly favorable matchup this week against the Texans.

Miles Sanders, Philadelphia Eagles. Sanders is on an offense that has fallen apart. The Eagles went from being able to compete with the Ravens to losing to the Giants. Sanders has also been unable to produce any numbers that he saw at the start of the season. In his last game, Sanders only ran for a total of 31 yards. This week doesn’t get any better for Sanders as he will be up against a Saints defense that has let up the second-least rushing yards in the league. It is officially time to move on from Sanders.

Corey Davis, Tennessee Titans. Every time the Titans seem to take one step forward they always find a way to take two steps back. Last week, the Titans were looking to prove why they should be a force to reckon with in the AFC against the Browns, but instead they ended up giving up 38 points in the first half alone. Even though the Titans have played well as a team, Davis has been feeding on opposing defense each week. Since returning to the lineup, Davis has seen 10 or more targets per game. The Titans should be able to bounce back against a Jaguars’ defense that ranks fourth in most passing yards per game given up per game. Davis should have no issues continuing his hot streak against a weaker Jaguars secondary.

Deebo Samuel, San Francisco 49ers. After Samuel’s excellent performance in his return from a four-week injury, Samuel has struggled. Since replacing the injured Jimmy Garopollo, quarterback Nick Mullens and the 49ers have not been the same. The 49ers have lost their last four of five games leading to Samuel having a harder time scoring reasonable fantasy points. Samuel’s chances for a better performance will have to wait another week as they will go up against another tough matchup in the Washington defense which ranks third in least passing yards let up per game. Samuel may have some potential in the future, but this week, it would be smart to leave Samuel on the bench.

T.J. Hockenson, Detroit Lions. The Lions fired Matt Patricia and then won a game. What a coincidence? Hockenson has been a huge part of their success as Matthew Stafford and the Lions are able to pass the ball without any constraints. In Hockenson’s last two games, he has seen a team-leading 17 targets.. This week, the Lions will be up against a Packers defense who let the Eagles’ Dallas Goedert catch a team-leading five passes for 63 yards. Hockenson has proved to be a reliable fantasy option, especially against a Packers defense that is weaker against tight ends.

Tyler Higbee, Los Angeles Rams. The Rams on paper have one of the most well-rounded teams in the league. They have the third-ranked offense and second-ranked defense in total yards per game in the league this season. While the Rams offense has seen a growth in success, Higbee has been surprisingly silent, surpassing double-digit points in fantasy only once since Week 3. Higbee’s performance isn’t looking good as this week, the Rams will be up against a Patriots defense that has given up the least points to tight ends in the league. Higbee is no longer a fantasy reliable tight end until proven otherwise.

Joey Slye, Carolina Panthers. After missing a game-winning 62-yard field goal by a mile against the Vikings two weeks ago, Slye will look to redeem himself. While he has seen a recent slump in field goals made, Slye should be able to get back on track this week against a Broncos defense that let the Chiefs stomp all over them last week. With the hopeful return of Christian McCaffery this week, Slye and the Panthers offense should be able to rack up a numerous amount of points.

Dan Carlson, Las Vegas Raiders. The Raiders almost let the Jets, yes the Jets. It took a Derek Carr lob to Henry Ruggs for the touchdown with five seconds left in the game to beat the atrocious Jets. Despite pulling out the win, the Raiders have been exposed for being vulnerable to weaker teams, but this week they will be up against the opposite in a Colts defense that is ranked 15th in least points allowed per game. For Carlson, this is bad news as he will have a harder time finding the opportunity to score. While Carlson may be the third-ranked fantasy kicker in the league, his matchup could cause fantasy managers to seek other options.

Arizona Cardinals Defense. There is something wrong with the redbirds from Phoenix. The Cardinals are on a three-game losing streak and are on the brink of missing the playoffs. Even though the Cardinals are continuing to watch the playoff hopes flush down the drain, their defense should be able to help them bounce back. This week, the Cardinals will face a Giants offense that has scored the second-least points in the league. With Colt McCoy still leading the offense for the G-Men, the Budda Baker and the Cardinals defense could be a sleeper waiver wire pick up for fantasy managers in need of a replacement.