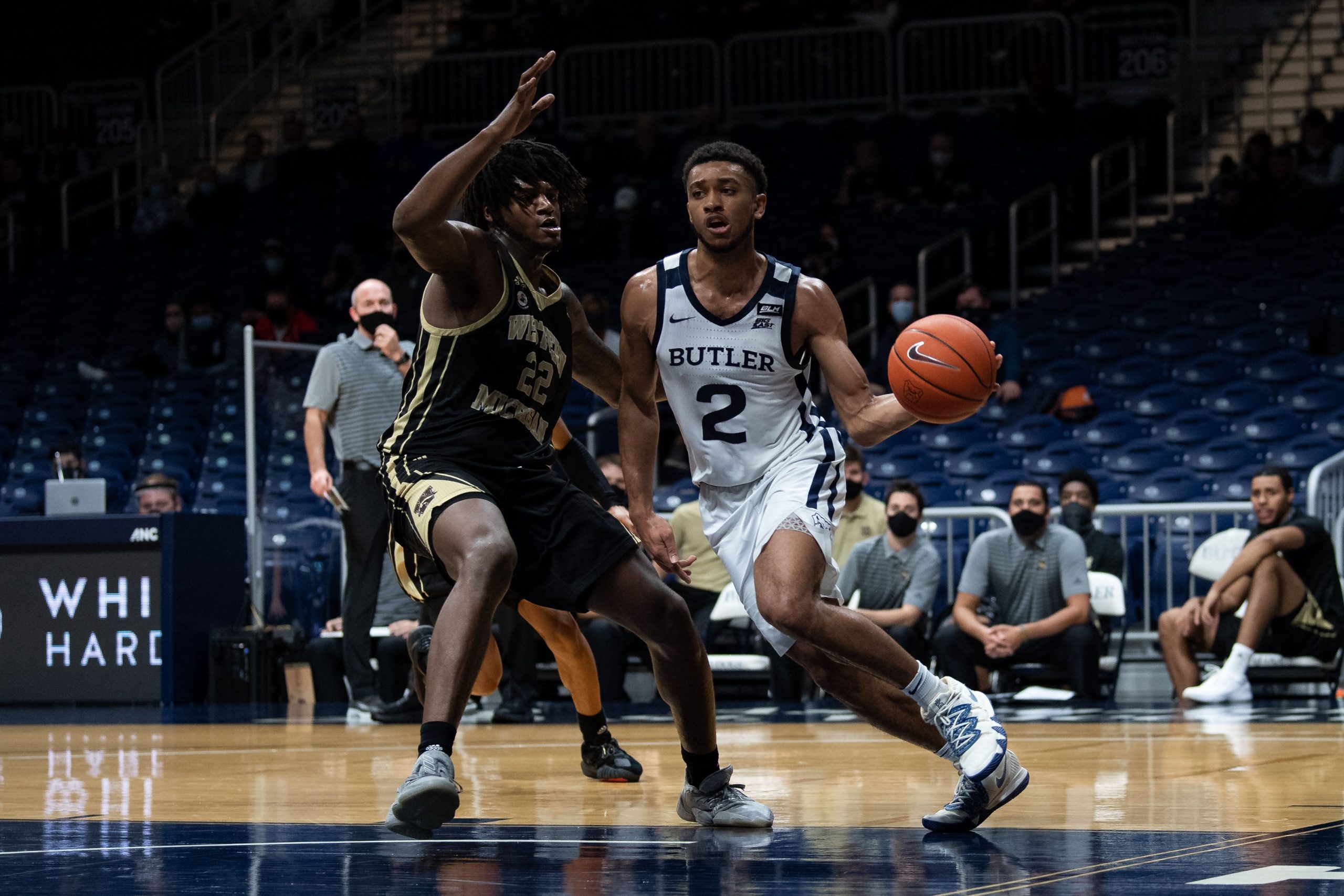 Aaron Thompson makes a move to the rim earlier this season against Western Michigan. Thompson scored 14 points and added 6 assists before going down with a knee injury late in the second half against No. 7 Villanova. Photo by Zach Bolinger.

Despite a season-high 18 points for grad senior Jair Bolden, the Butler Bulldogs men’s basketball team fell to No. 7 Villanova 85-66 to suffer their first loss of the season in their first game back in three weeks. Butler drops to 1-1 on the season. Bolden added 5 rebounds and 2 assists along with his 18 points while Aaron Thompson chipped in 14 points and 6 assists before going down with an injury late in the game. We go beyond the box score in the Bulldogs’ return to play.

1. Jair Bolden has the makings of Butler’s go-to scorer

While Butler and Villanova came into Wednesday’s matchup as two of the slowest teams in terms of tempo according to kempom.com, the Bulldogs and Wildcats came out of the gates fast with the score already climbing to 17-10 after just the first five minutes of game action. This impressive offensive showing early on was largely thanks to Jair Bolden, who scored 13 of those first 17 and was single-handedly outscoring the Wildcats in the opening minutes. This ability to get hot quickly will be key for Butler down the stretch of the season when they are faced with critical possessions late in games when they need a basket. Without Kamar Baldwin in the fold this year, that role can be filled by the fifth-year senior Bolden.

In the second half, the roles reversed as Bolden began to cool off and Aaron Thompson became more aggressive driving to the basket. Despite scoring just four points in the first half, Thompson ended the night with 14 points and 6 assists while shooting 4 of 5 from the foul line. As seen in the opener against Western Michigan, Thompson has developed his ability to create his own shot and has proven to be a reliable scoring threat for this year’s team, albeit from inside the 3-point line. His knee injury will be worth keeping an eye on as Butler moves forward to Indiana on Saturday.

In one of the more noteworthy stats of the night, freshman guard Chuck Harris led the Dawgs in minutes played, logging 37 of 40 minutes in the contest. With so many new faces in the locker room this year, these first few games are critical for Coach Jordan and staff to find their key players as they progress through conference play. Harris scored 12 points and hit two 3-pointers.

While Collin Gillespie was still able to score a quiet 18 points, many of those baskets were made very difficult by Harris’ stingy defense. In a similar way to how Aaron Thompson immediately stepped into a major role as a freshman, Coach Jordan may be seeing those qualities out of the young Harris.

3. The Bulldogs’ future is bright

While Butler starting off their return to play after 20 days off against No. 7 Villanova on the road was not ideal, the young Bulldogs played above expectations in a difficult place to play, regardless if there were fans or not. Harris and JaKobe Coles made their first career collegiate starts in the game and the freshmen collectively showed real promise for the rest of the season and the campaigns to come. Myles Wilmoth made his collegiate debut against the Wildcats and went a perfect 3-for-3 from the field —- including one 3-pointer — and grabbed five rebounds while playing good defense in a significant 20 minutes.

While this group may experience growing pains down the stretch, it’s hard to ignore that they have already exceeded expectations for their second game at the Division-I level. In the postgame presser, Coach Jordan named three players specifically that impressed him in the game and they all happened to be freshmen stepping up into major roles already.

On Dec. 16, the NCAA’s Division-I council voted to grant immediate eligibility to all transfers, which is great news for Butler and Bo Hodges, the 6’5 senior transfer who played at East Tennessee State last year. While Hodges did make the trip to Villanova, he was unavailable for the game and it remains unclear if he will be able to play against Indiana on Dec. 19, but his presence will be a huge help for the Bulldogs moving forward.

The Bulldogs played well for the majority of the game against one of the top teams in the country without Bryce Golden, Bo Hodges and Christian David in their first game back in three weeks. As this team gets more experience playing together and getting in game shape, they are in a position to make some noise in the Big East conference. The Bulldogs face the Indiana Hoosiers in the Crossroads Classic at 11:30 a.m. on Dec. 19 from Bankers Life Fieldhouse in Indianapolis.